Ribulose-1,5-biphosphate carboxylase/oxygenase catalyzes the first reaction of the Calvin cycle, converting the combination of Ribulose-1,5-biphosphate(RuBP) and carbon dioxide and then form two 3-phosphoglycerate molecular. 3-phophoglycerate will then convert to pyruvate by the native metabolic system of E. coli. Previous studies have utilized E. coli as a host of studying point mutation and random mutation of rubisco gene in order to enhance its enzyme activity. This study proved that installing rubisco gene into E. coli system is actually feasibly. After mining information from journal, we selected rubisco gene form Synechococcus elongtus PCC7002, which is a well studied cyanobacteria.

The structure of RubisCO involves two polypeptide subunit: RbcL and RbcS. Each RubisCO is consist of eight RbcL and RbcS. RbcL, the large chain of RubisCO, contain the main active site. The active site requires Mg2+ ion. The ion binds to the certain amino acid of the centrol of RbcL, activate the RubisCO. Since the M9 medium contains Mg2+ ion, we only need to add little amount of additional ion, adjusting the concentration to 20mM.

It has reported that RbcL can be functional solely. However, researches have revealed that RbcS contribute to the activity and the CO2/O2 specification through the mutagenesis and hybridization of cynobacteria RubisCO, and indicated the RbcS should take into consideration while constructing Calvin cycle. For this reason, we decide to add RbcS gene into our construction.

RbcX, the subunit which doesn’t involve in the structure of RubisCO, however, plays an important role of the structure folding . Researches have revealed that without the presence of the RbcX chaperon, RubisCO cannot fold correctly. According to these researches, we take the RbcX into our consideration and add the gene into our construction.

We did three experiments to confirm the expression and function of this part. First we inserted the part on pSB1C3 and cloned the plasmid into E. coli DH5 alpha. We extracted the plasmid after the colony formed and did the enzyme digestion to confirm the insertion was successful. Second, we did the SDS-PAGE to confirm the present of each polypeptide. Third, we cultured the E. coli W3110 with the the PlacI-rubisco part and PRK part in M9-xylose medium in 5% CO2 incubator and normal incubator after inducing the RubisCO gene. The result showed that the with the present of these two functional enzyme. The E. coli grew faster and consumed more xylose in the CO2 rich environment.

We then utilized XUI to evaluate the function of each enzyme in the pathway. We first check the function of Rubisco in BL21(DE3) strain. Rubisco enzyme with promoter PT7 (BBa_K2762011) was cloned into pSB1C3 and PRK with promoter PlacI (BBa_K2762007)was cloned into pSB3K3. Both plasmids were then co-transformed into BL21(DE3). We measure the XUI of the strain and compare to the control that IPTG was not added and BL21(DE3) without plasmid. IPTG can induce the promoter PT7 to produce the downstream enzyme. The growth of each strain is first examined. The IPTG induced strain showed growth retard. We assume the cause of growth retard is due to the pressure from overexpressing the protein rubisco. The control strain without IPTG induction produce less rubisco enzyme than the experiment and had less pressure. We then compare the XUI of each strain and discovered that control strain without IPTG induction produce less rubisco enzyme than the experiment. Without rubisco, the bypass pathway is not capable of using CO2. We found out that the strain without Rubisco has higher XUI, symbolizing that RubisCO is essential in carbon fixation pathway. 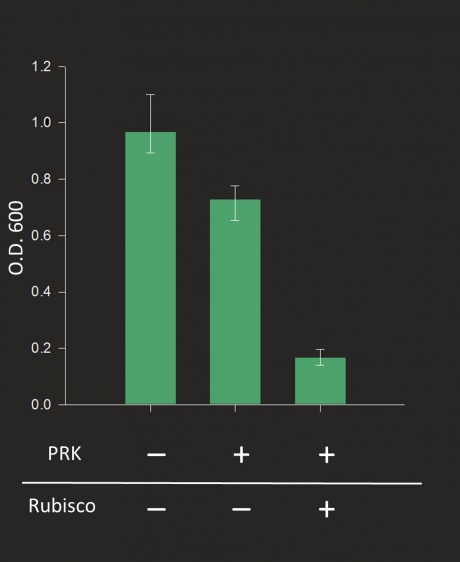 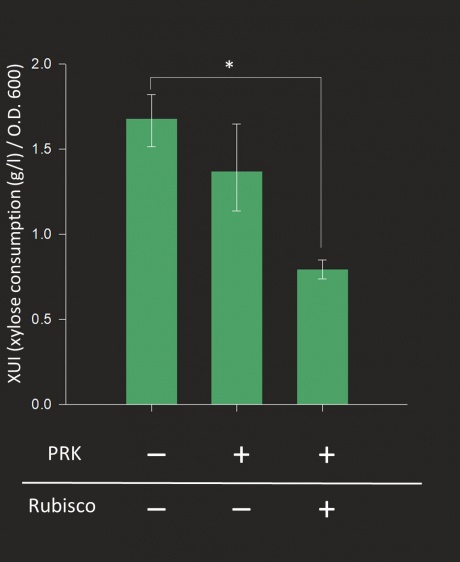 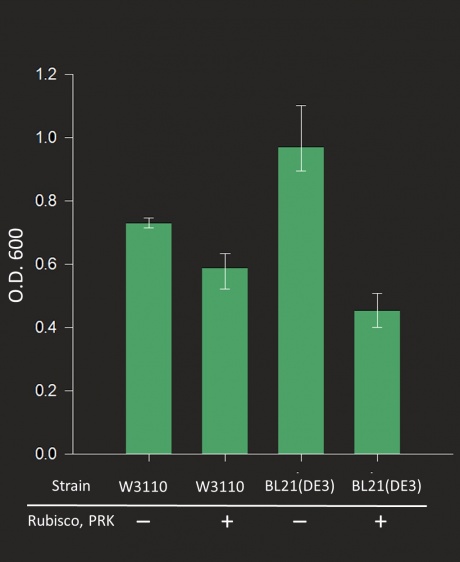 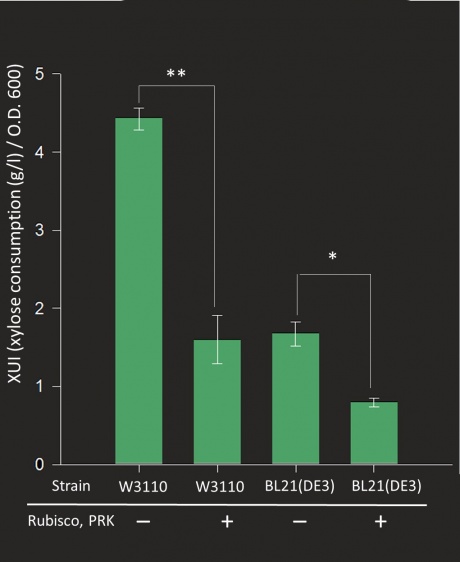 We finally concluded that the efficiency of the bypass pathway in BL21(DE3) is better than that in the W3110 strain.