The rbcXS part encode the RbcS subunit of RubisCO and the chaperon RbcX. The RbcS affect the activity of RubisCO and RbcX contribute to the correct folding of the whole RubisCO enzyme.

The rbcX and rbcS gene are from cynobacteria Synechococcus elongatus PCC 7002. We designed the PlacI (BBa_R0010) promoter for the gene and cloned gene in DH5 alpha in order to test the function while consecutive expression.It has reported that the expression of RubisCO could not be detectable while only add single promoter of the rbcL-rbcX-rbcS gene fragment. Therefore we added another PlacI promoter on the upstream of rbcX-rbcS gene and named the part as rbcXS. We also did the coden optimization for the gene to ensure successful expression. The activation of RubisCo will be maximize after the binding of the RbcS subunit. To get more information, see our composite part: BBa_K2762012. 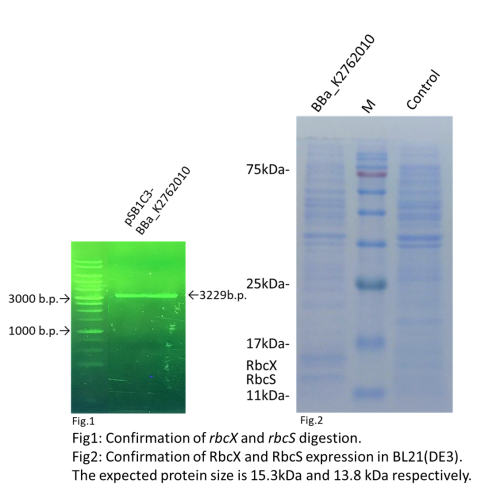