A plasmid containing a urate oxidase sequence was introduced into the BL21 strain, and IPTG was used as an inducer to induce expression of urate oxidase. After expression, the cells were disrupted by sonication and the supernatant was taken. The supernatant (extracellular protein) of the first centrifugation and the supernatant (intracellular protein) after sonication were subjected to polyacrylamide gel electrophoresis. The electrophoresis results are shown in Figure 1. 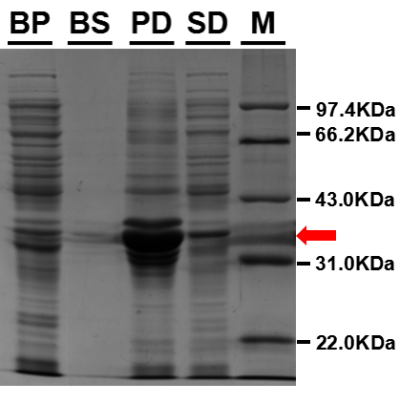 Validating the functionality of Urate Oxidase

We constructed E.coli 1917 with only urate oxidase (oxidative system only, no promoter) as the experimental group, and transferred an empty plasmid into another strand as the control group. 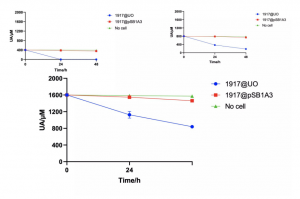 1. Cultivate the engineered strain in LB liquid medium and adjust the uric acid concentration to the corresponding concentration. N=3

3. Centrifuge at 3500 rpm for 5 minutes, and extract the supernatant.

4. use of uric acid detection kit to collect results.   2.2 The influence of other environmental factors on the degradation of uric acid   We also experimented with more conditions to test if the system could work properly in different environments to see if it works in an environment with a pH of 5.0 to 9.0 and a temperature of 25-50 degrees Celsius.

The initial concentration was 2000 μM/L, the cultivation time was 48 hours, and the oxidation efficacy was determined using the uric acid detection kit. We set the temperature to 37 degrees celsius when determining the effect of pH on our strand, and the pH was 7 when we tried to determine the optimum temperature.