Clostridial promoter Pcdi_tcdA with its native 5' UTR and RBS, driving a GFP reporter

Our project required the use of strong constitutive promoters which would function well in the non-model Gram-positive organism Clostridium difficile. We also wanted to establish whether these promoters functioned in E. coli, as this could have implications for cloning stages and vector assembly when trying to build constructs containing potentially toxic genes. In order to put the strength of these promoters into context, we decided upon a GFP fluorescence assay using the iGEM Interlab calibration curves, and also to compare their strengths to the Interlab positive and negative controls. This promoter was taken directly from the organism in which we wished to demonstrate our novel methods (C. difficile) for controlling toxin production, as we wanted to gain a greater understanding of the level of expression from this promoter in the wild type organism. We decided to explore its expression levels in E. coli, as it has been shown in previous research to be under the regulation of an alternative sigma factor encoded by tcdR, present in the C. difficile genome, and therefore we expected to observe reduced expression in E. coli. The variant of this composite part used for testing expression levels in C. difficile can be found here BBa_K2715028.

This composite part is composed of the native clostridial promoter driving expression of the toxin gene tcdA, sub-divided into the promoter region itself BBa_K2715012, the 5’ UTR region BBa_K2715021, and the RBS BBa_K2715022, driving expression of GFP taken from BBa_E0040. The construct is part of a family of composite parts driving expression of the GFP gene and were all characterised in the same plasmid backbone and in parallel in a fluorescence assay, the results of which can be seen below. The positive and negative controls are parts BBa_I20270 and BBa_R0040 respectively, used in the Interlab 2018 study. The composite parts tested in this assay under the same conditions using a range of alternative promoters are as follows: 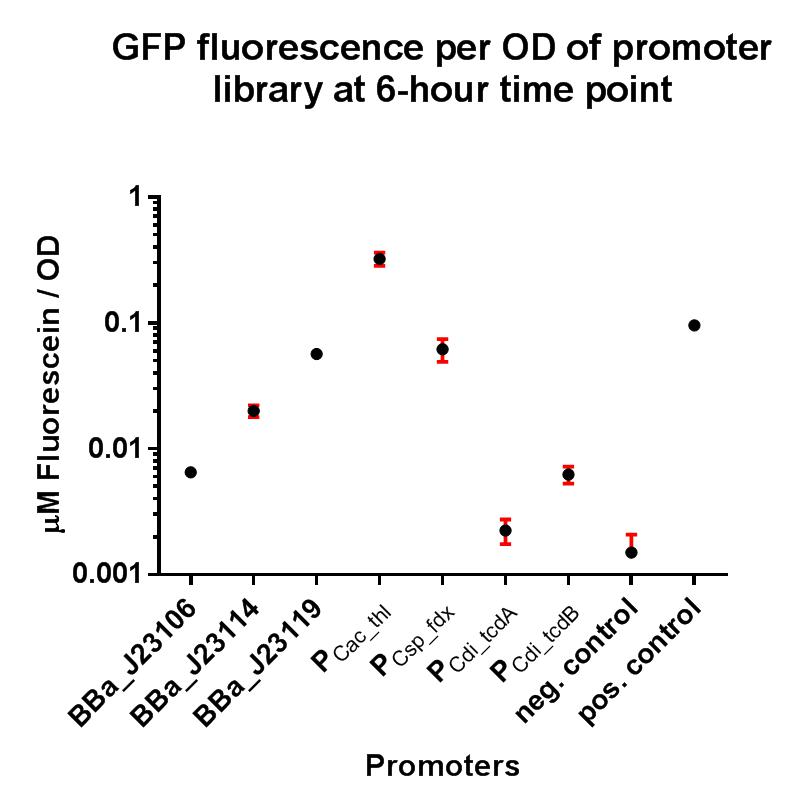 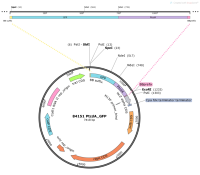 This composite part has enabled a standardised characterisation of the native promoter driving the tcdA gene and its strength can be quantified in E. coli using the iGEM 2018 interlab units of fluorescence. It has been demonstrated in this assay to be very weakly expressed, suggesting that it may indeed by subject to regulation by an alternative sigma factor, or perhaps it may just be that this clostridial promoter is poorly expressed in the Gram-negative organism E. coli.