For the silver medal criteria “Validated Part” we submit a basic part: the sequence of resistance marker to paromomycine that is an aminoglycoside antibiotic. The aphVIII gene from Streptomyces rimosus encode for an aminoglycoside 3’-phosphotransferase gene (aph). From the aphVIII gene sequence of the BioBrick BBa_K1884013 (iGEM16_SZU-China) BpiI estriction site were removed ( G551C) by PCR point mutation. We cloned aphVIII by PCR amplification in B4-B5 position of the MoClo standard2 to use it in our retrotransposon design. Acceptor plasmid is the MoClo Universal pL0 acceptor plasmid pAGM91212. We sequenced again the sequence to be sure there is no unwanted mutations.

It is usually use in Chlamydomonas reinhardtii under the control of the HSP70A promoter and the 3’UTR of RBCS2 gene as terminator1. Here we report the domestication of the aphVIII gene in the C. reinhardtii MoClo Kit

Our part is compatible with the PhytoBrick MoClo standard. This PhytoBrick was intended to be used as a rapporter gene in the CARGO to test the functionality of our synthetic retrotransposons for directed evolution in C. reinhardtii.

We couldn’t directly use our Phytobrick for its characterization because we did not have the time to construct all the other parts needed for the final functional assembly. Instead we used a slightly different Phytobrick with the same aphVIII sequence but with different fusion site in 5’ and 3’.

Figure 1 : Schematic representation of the Phytobrick BBa_K2703008 and its fusion site for the MoClo assembly. It complies with the Common Genetic Syntax fusion sites.


This part was assembled into a functional Transcription Unit with. After transformation in C. reinhardtii D66 strain3 the functionality aphVIII gene sequence was tested by counting the number of colony resistant to paromomycine (15 ug/mL).
Figure 2: The 4 different devices made to test the functionality of the promoter PPSAD. The construction were made with the MoClo kit made for C.reinhardtii by P.Crozet et al 2018 1. 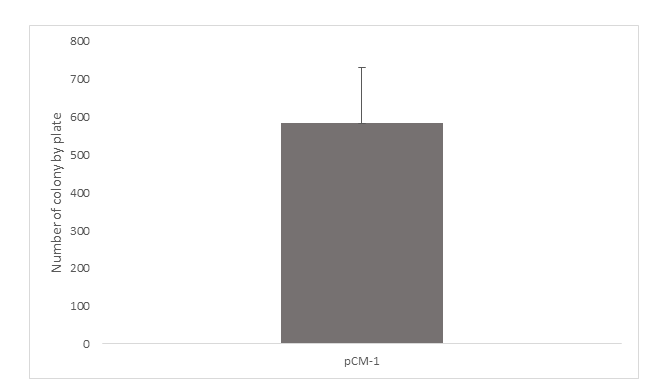 Figure 3: Graphic listing the 4 devices (pCM-1) transformed in C.reinhardtii D66 by electroporation with 100 ng of DNA. The selection was made on TAP agar media with paromomycin (15 g/mL) by plate. Data are mean  SD (N=3) and there were no colonies with a negative control .
The aphVIII gene sequence work as intented in once a transcription unit is assembled by GoldenGate cloning following the Chlamydomonas MoClo kit.

The Humboldt Team 2019 proposed an improvement of this part for the gold criterium #2. The improved part, BBa_K2984006, can be seen here. The part was improved by doing a codon optimization for use in Chlamydomonas reinhardtii.

To see if the expression of the aminoglycoside 3’-phosphotransferase was increased, we performed several electroporations to transform C. reinhardtii with the improved paromomycin resistance. We used the C.reinhardtii strain UVM 4 since it is a strain designed to express transgene constructs (Neupert et al. 2009). We transformed the two paromomycin constructs with standard and improved codon usage starting with 0,5 µg DNA per electroporation sample and ascended with 0,5 µg steps up to 2 µg. For each construct and DNA mass we did three electroporations. The electroporation electrical resistance was measured for each sample. After resuspension and one day recovery in TAP medium, all samples were plated on TAP-agar plates containing a paromomycin concentration of 10 µM. After two weeks of growth, colonies corresponding to each sample were counted. Each colony of C.reinhardtii represents a successful transformation of the resistance and indicates the expression of the aminoglycoside 3’-phosphotransferase. By counting the amount of colonies on the plates, we could determine which construct and at which DNA mass at the time of transformation worked best.

First, we counted the total number of C. reinhardtii colonies that were transformed with the standard and improved resistance, regardless of the DNA mass used at the time of transformation. The results of the total colony count can be seen in Fig. 1. Counting the colonies we discovered that the total number of colonies was much higher for the improved plasmid version. The colonies of the samples using the standard usage resulted in a total amount of 175 whereas the improved plasmid version produced 665 colonies. This result indicates that the improved paromomycin resistance works better than the one with standard codon usage. Comparing the plasmid mass at the time of electroporation we discovered that the amount of colonies does not strictly correlate to the amount of DNA used during the electroporation (Fig. 2.). For the paromomycin resistance with standard codon usage we can see that the number of colonies at 1,5 µg is smaller than expected. Similarly, the amount of colonies for the improved resistance at a DNA mass of 0,5 µg is much higher than expected. The other results seem to show a tendency of increasing colony numbers with more DNA mass. Yet, further tests should be made to examine the exact effect of DNA mass during transformation for these parts. One explanation for the variable amount of colonies might be the inconsistency of the electroporation resistance. To see how the electroporation process affected the number of colonies their quantity was compared with the corresponding resistance (Fig. 3). Fig. 3 depicts that the set with 1,5 µg standard plasmid was executed with a robust resistance of around 570 ohm for all 3 samples. The 1 µg set of the same plasmid shows a variable resistance but delivered more colonies. In the 2 µg standard plasmid set the resistance of the first sample dropped to 457 ohm but the same amount of colonies as in sample 1 of the 1,5 µg standard set were counted. With further comparison of these to sets it can be seen, that the third samples in the 1,5 µg and 2 µg sets showed similar resistance but the third sample of the second set resulted in a much higher colony number. The data behaves similar for the improved plasmid. The second sample of the first set and the third sample of the third were carried out with a resistance around 610 ohm but for the third sample almost 34 more colonies were counted. The experiments showed clearly, that the improved codon usage resulted in larger number of C.reinahrdtii colonies capable of growing TAP-paromomycin-agar plates. This proves that the changed codon usage promotes a higher expression of the aminoglycoside 3’-phosphotransferase and is therefore an improvement of part BBa_K2703008.