iGEM17_Linkoping_Sweden part BBa_K2474000 modified. A stop codon was mutated behind mNeonGreen (mNG). The original part was mNG fused to Aβ1-42, where the fusion protein had its stop codon after Aβ1-42. Another mutation was made in the GS-linker sequence where a SpeI-site was added and the sequence for Aβ1-42 was cleaved off. With these improvements mNG can now be used as a reporter in a fully functional operon with the pBAD-AraC inducible system. It also compares the difficulty an aggregation-prone fusion protein to a non fused version.

The results for our improved part can be seen below. The reason we chose to improve this part was not only to create a functional reporter system, but also to illustrate the loss of exchange with a aggregation prone fusion tag. From Figure 1. you can clearly see that the version without Aβ1-42 folds better and thus gives a much higher fluorescence, while the fusion version is having trouble. The two parts was grown in LB-medium, containing 0.25 mg/ml L-arabinose and 25 ug/ml chloramphenicol over 16 hours. They were then lysed through the "freeze-thaw" method and centrifuged. The supernatant was saved and placed on an UV table as seen in Figure 1. 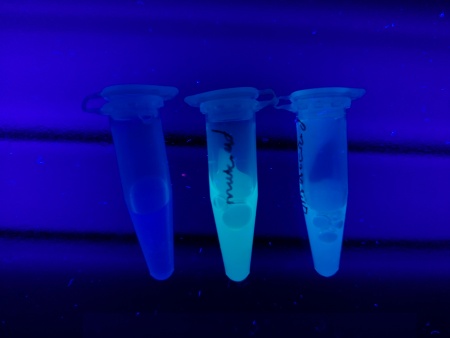 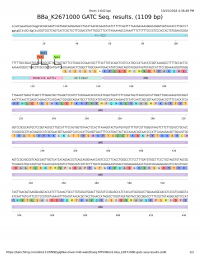 Figure 2. Sequencing results (see attached files for an chromatogram) analyzed in benchling, annotations added for clarity. The sequencing data attached confirms a successful removal of Aβ1-42 and addition of a stop codon. Sequencing was done with the VR primer.

An improved version of this part can be seen here: BBa_K3182300 (Group: iGEM19_Linkoping_Sweden) Designed by: Oliver Hild Walett 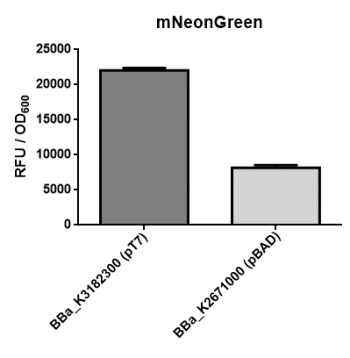 To evenly compare the parts, both biobricks were grown to a starting optical density at 600 nm (OD600) of 0.4 ± 0.05. Both biobricks were inoculated in LB-Miller media containing 25 ug/mL chloramphenicol. After the cultures reached OD600 0.4, this part was induced using 0.5 mM IPTG and the old part was in induced with 1.5 mM L-arabinose. Aliquotes of the induced cultures were then placed in a 96-well plate and later analyzed with spectrometry. Fluorescence was then measured over 16 hours in 37 °C and excitation wavelength was 505 nm and emission wavelength was 525. The results from this experiment can be seen in Figure 4. As expected the pT7, the improved part, had a fluorescence which was more than twice than BBa_K2671000.