The Cerberus part (BBa_K2668010) is composed by the CBM3a1 (corrected version of the Part:BBa_K1321014) fused at the N-terminus to the biotinylated molecule-binding head (monomeric streptavidin2, Part:BBa_K1896000) and at the C-terminus to the unnatural amino acid azido-L-phenylalanine (AzF)3. The incorporation of AzF is achieved through the recognition of the amber stop codon at the C-terminus of CBM3a by an orthogonal AzF-charged tRNA.

Coupling of molecules to the AzF head can be performed by click chemistry, either by SPAAC or by Cu(I)-catalyzed azide-alkyne click chemistry (CuAAC). To prove the versatility of the system, different compounds such as fluorescent proteins or paramagnetic beads have been clicked on Cerberus.

The Cerberus part (BBa_K2668010) consists in a CBM3 domain fused with mSA2, an engineered version of Streptavidin and Rhizavidin, on his N terminus endogenous linker and containing a UAG codon on his C terminus linker for amber suppression by an unnatural amino acid incorporation. The Streptavidin and N-terminus linker are separated by a TEV cleavage site to accesorily release the bound compound. IDT performed the DNA synthesis and delivered the part as gBlock. The construct was cloned with an In-Fusion kit into the pSB1C3 plasmid and then transformed into E. coli Dh5-alpha strain. Figure 1 shows the restriction map of the resulting clones. We expected two bands at 2.4Kb and 0.7Kb. Only clones 2 and 5 (lanes 3 and 6) show the expected restriction profiles. The clones 5 was deposited in the registry of Standard Biological Parts. 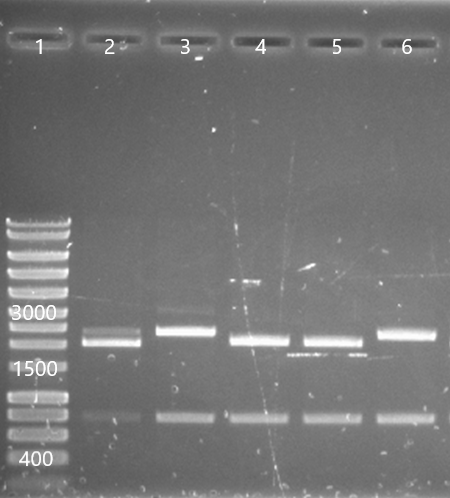 Figure 1: Analyses of pSB1C3_ CBM3- monomeric streptavidin – AzF length and restriction map The plasmids of 5 obtained clones were analysed to check their length. XbaI/NcoI digested plasmids (clones 1 to 5) are electrophoresed through a 1% agarose gel. Lane 1 is the Smart DNA ladder (Eurogentec), the 0.4kb, 1.5 kb and 3kb DNA fragments are annotated. Lane 2 to 6 are the digested plasmids resulting from DNA extraction of the 5 clones.

Modelling this three-headed fusion protein presented a complex challenge, requiring a multi-step and multi-level strategy relying on various molecular modelling and simulation methods. We used available X-ray structure data from the Protein Data Bank, integrated 3D structure prediction tools, employed innovative robotics inspired artificial intelligence methods to explore the intrinsically disordered regions, built and parametrised the unnatural amino acid aziodphenyalanine, and finally studied its behaviour over time through molecular dynamics simulations in a large explicit solvent water box. The results of the molecular dynamics simulation comforted us in the stability of our construction as the domains kept their structure over 90ns of simulation as showed in figure 2.

The fusion between the streptavidin linker and CBM3a platform sequences followed by the amber stop codon was cloned into the pET28 (containing an His Tag) expression vector using In-Fusion Cloning Kit. pET28 was digested by NcoI and HindIII and the part was amplified using the primer pairs stated below. The resulting construct was co-transformed along the pEVOL-AzF expression vector (coding for amino acyl tRNA synthetase (aarS)/tRNA orthogonal pair for in vivo incorporation in E. coli under L-arabinose induction) into E. coli strain BL21. pEVOL-pAzF was a gift from Peter Schultz (Addgene plasmid # 31186). Expression of the recombinant protein was induced using IPTG and L-arabinose, with addition of AzF in the medium. The synthesis of aaRS/tRNA pair was first induced with L-arabinose and AzF added at the same time. One hour later, the production of Cerberus was triggered with IPTG. The His-tagged protein was then purified on IMAC resin (Sigma) charged with cobalt. Results are shown on figure 3. 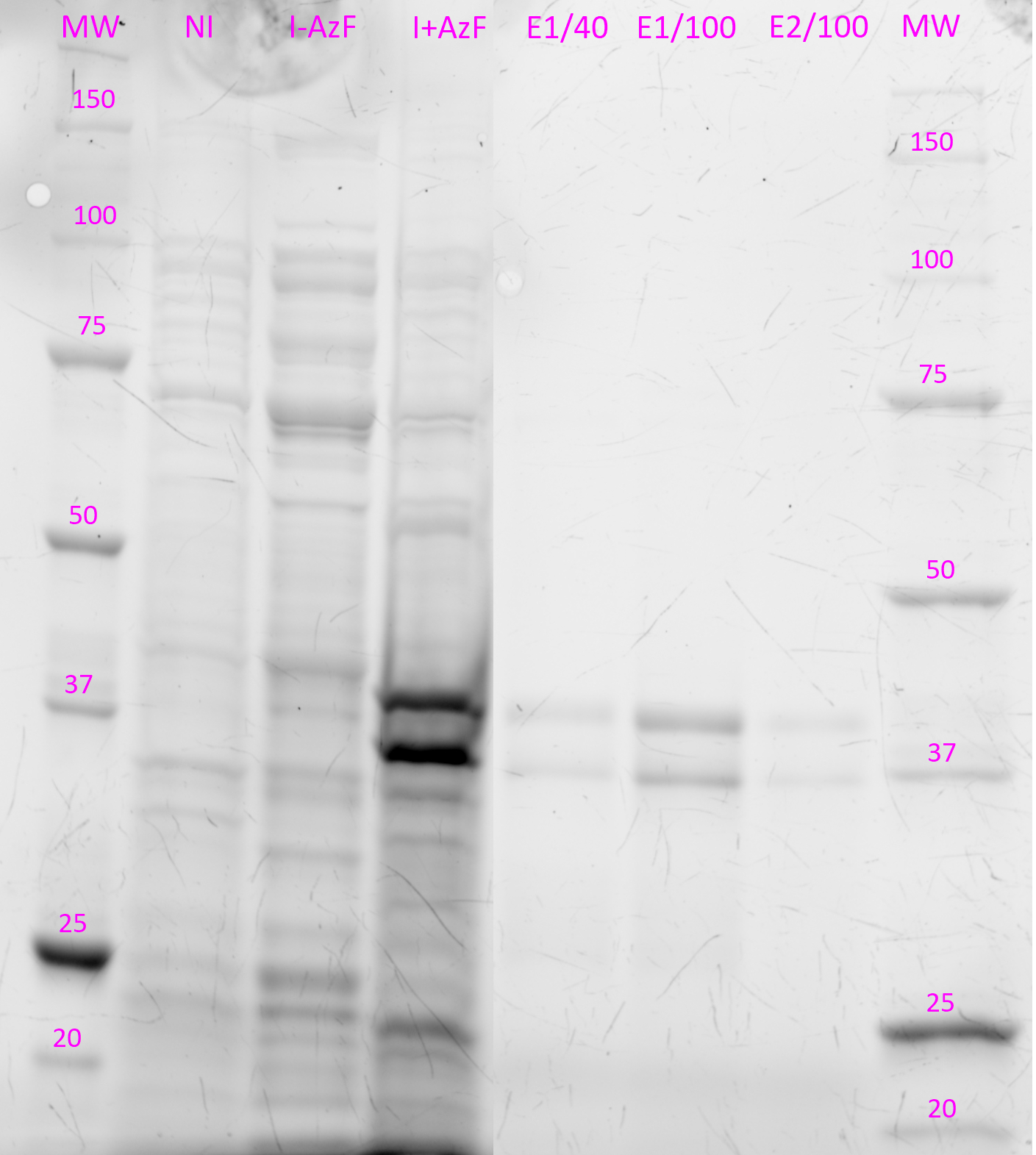 Induction in the presence of AzF (lane I+AzF) led to the expression of two major bands at 37 and 39 kDa approximately compared to control conditions, namely the non-induced (lane NI) and induced without AzF (lane I-AzF). We hypothesized that the upper and the lower bands could correspond to Cerberus (expected molecular weight of monomeric Cerberus: 41 kDa), and a version of Cerberus lacking AzF and therefore the His Tag (39kDa expected). Surprisingly, both bands were still present in the elution fractions which seems incoherent since the band lacking the His-tag was supposed to be washed out during purification steps. To confirm our hypothesis, we analysed the same fractions by western blot using antibodies directed against the His-tag (Figure 4) 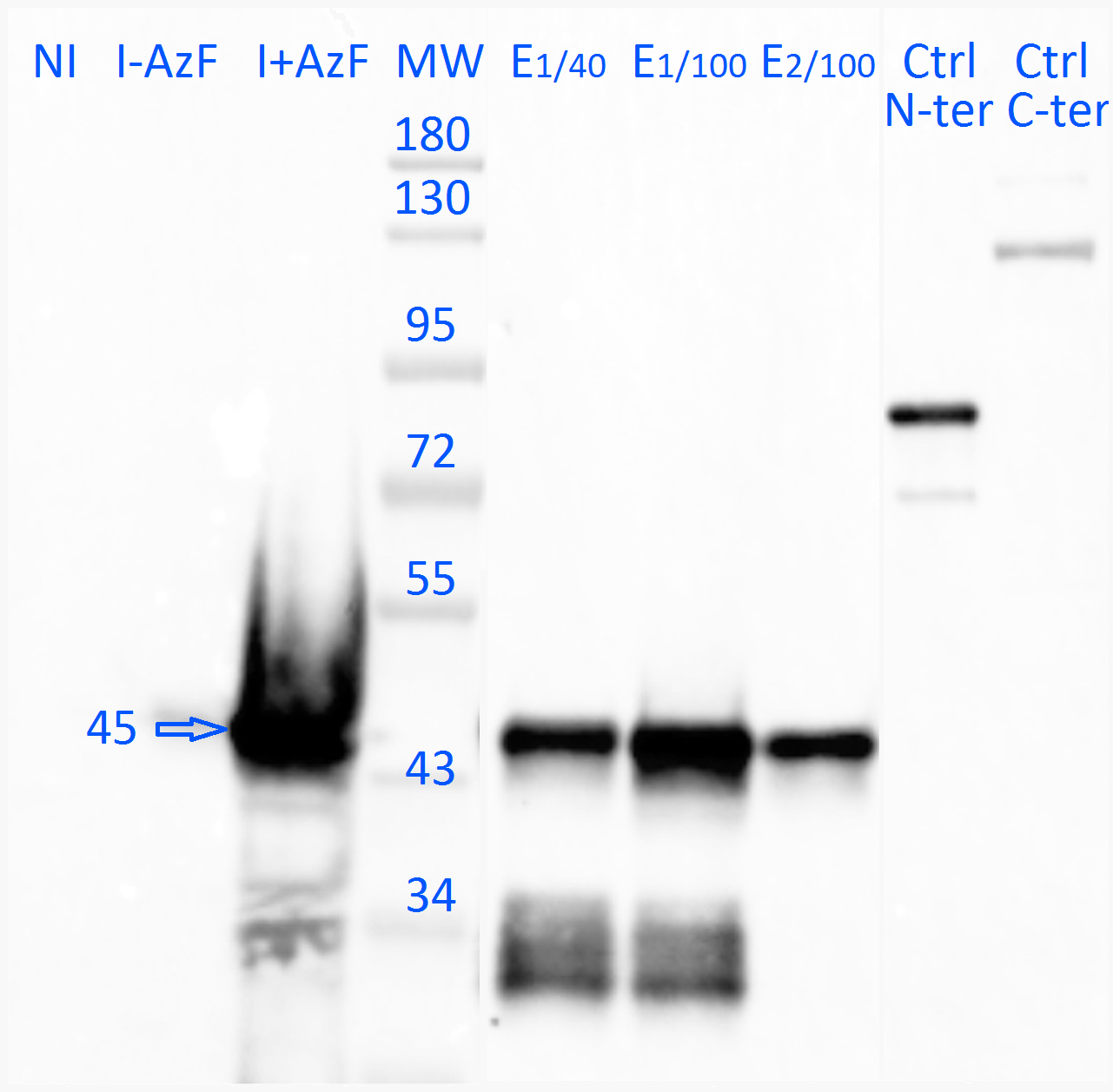 Anti-His-tag antibodies revealed a band at about 45 kDa in the sample corresponding to IPTG induction in the presence of AzF (lane I+AzF). This band is not present in control samples (lane NI and I-AzF), indicating that it corresponds to the Cerberus protein (theoretical size: 41 kDa). In addition to the full length protein, we observed several extra bands which very likely correspond to proteolysis products since they are detected with the anti-His-tag antibodies. Moreover, the band at 45 kDa is clearly detected in elution samples (lanes E). The purification level of Cerberus with monomeric streptavidin in the elution samples was estimated about 62%. These data show that Cerberus was efficiently purified and can be used for subsequent assays. In addition, these results show that experimental setup to produce Cerberus also leads to the production of a protein where the amber stop codon has not been recognized by the AzF-charged orthogonal tRNA (a construction we named Orthos in our project). Although Orthos does not contain a His-tag at its C-terminus, the protein seems to be efficiently co-purified with Cerberus. The basis of this observation is unclear but this result may suggest that Orthos and Cerberus interact together.

To validate both the AzF and CBM3a heads of Cerberus, we challenged its potential to functionalize cellulose with fluorescence. To generate a fluorescently labelled Cerberus protein, we first performed a SPAAC reaction on 3.2 µM Cerberus protein using 31.9 µM of FITC-DBCO (Jena Bioscience). In the control experiment, 31.9 µM of FITC alone was used. These samples were then incubated with cellulose for 16 hours and after several washes with resuspension buffer (50mM Tris HCl pH 8), fluorescence levels were measured in the cellulose pellet fractions (Figure 5). We observed that the fluorescence levels in the cellulose pellet incubated with Cerberus protein clicked to FITC were about 3 times higher than in the control experiments corresponding to the cellulose pellet incubated with FITC alone. These results show that Cerberus can efficiently be conjugated with fluorescent molecules bearing a DBCO group by click chemistry and that the resulting fluorescent molecules strongly interact with cellulose.This result proves that cerberus AzF and CBM3a heads are valid and therefore, makes our construction both a practical and potent platform to functionalize cellulose. 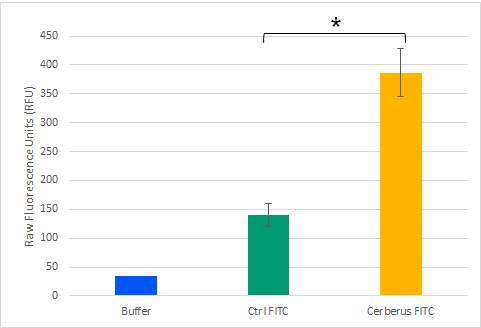 Validation of the Streptavidin and CBM3a heads

To asses the functionality of the Streptavidin head, we used a non AzF version of Cerberus (its Orthos version). We performed SPAAC reaction to ligate in vitro biotin-DBCO to an azide-functionalized fluorescein (FITC), thus leading to the expected biotinylated FITC. 5.8 μM of Orthos were incubated with 58.0 μM of biotinylated FITC for one hour under shaking and then incubated with regenerated amorphous cellulose as described previously. Fluorescence was measured after four washes and results are presented in figure 6. The results indicates that fluorescence retained in cellulose pellet is higher when orthos is present which indicates that the binding between biotinylated FITC and Streptavidin was effective, proving that the activity of both streptavidin and CBM3 remains intact when fused. This validated the Streptavidine head.

These results show that Cerberus has the ability to interact simultaneously with cellulose and molecules with DBCO group or biotinylated compounds. This allows multiple possibilities to functionalize cellulose through its linker containing unnatural amino acid (AzF) and/or the linker presenting the engineered monomeric Streptavidin (mSA2).

Fixation of various compounds that can be chemically functionalized can now be achieved envisioning endless possibilities to functionalize cellulose. We sincerely thank the future teams that will use this construction and encourage them to contact us for further details