Introduction
This composite part collection contains the Vitreoscilla hemoglobin (VHb) and the gene that codifies the green fluorescent protein (GFP). The coding sequences are controlled under two different Anderson promoters with their correspondent ribosome binding sites and a double terminator sequence to allow for a tight expression of each gene. The parts were used by Team Lund 2018 to test Vitreoscilla hemoglobin expression levels for protein co-expression.

This set of composite parts was created by Team Lund 2018 to allow for a modulated expression of the Vitreoscilla hemoglobin. This allows the user to screen various expression levels of the protein so that a suitable effect on the cell productivity is obtained when expressed under low oxygen environments. Co-expressing of hemoglobin with a target protein of interest to increase yields in e.g. reactor settings or to increase cell survivability under stressful environments [1].


Experience
All the parts were confirmed with agarose gel electrophoresis (fig. 1). NotI restriction sites are located in both the prefix and the suffix of the inserts, so there should be one band at 1563 bp corresponding to the VHb-GFP construct, and one at ~2200 bp for the plasmid backbone. In the figure it can be clearly seen that all the constructs, except K2602022 (no successful transformation), show the two bands expected from digestion with NotI. 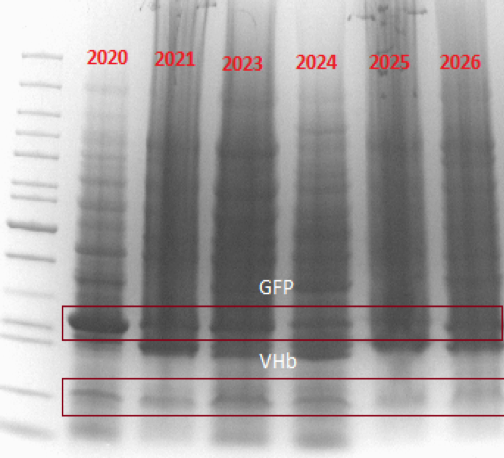 It is important to highlight that no negative control was used, as our control strain also has a band with a molecular weight like one of VHb and therefore the confirmation of the expression of VHb should be done by its expression with a His-tag, which would allow for purification before performing the SDS-PAGE.

The expression of the VHb-GFP constructs confirmed that all the transformants were able to produce GFP as can be seen based on the characteristic green color of the cell pellets (fig. 3).