The promoter contains a conserved AT-box motif just upstream of the ribosome binding site that serves as the binding site for light-activated proteins. For the Biobrick, we kept most of the original promoter, including a crucial upstream element and the core promoter sequence. Our final Biobrick is 157 bp in length.

Theory: PsbA2 is a promoter that encodes for the D1 protein, a protein involved in photosystem II and which degrades faster (~every 20 minutes compared to every 5 hours) upon exposure to high light intensity. There are three promoters involved in synthesizing D1: PsbA1, PsbA2, and PsbA3. These promoters work differently in different strains of cyanobacteria; however, in S. elongatus PCC 7942, PsbA1 is transcribed under normal light conditions (~120 uM photons/m^2/s), while PsbA2 and PsbA3 are actively repressed [2].

Upon exposure to high light (~>500 uM photons/m^2/s), PsbA2 and PsbA3 are transcribed, while PsbA1 is repressed [3]. These properties make the promoter PsbA2 an attractive optogenetic biobrick for toggling the gene expression of proteins involved in the production of carbon-based products in cyanobacteria. 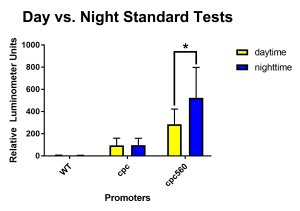 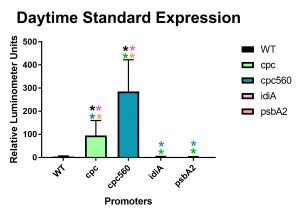 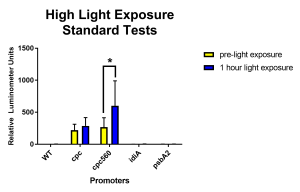 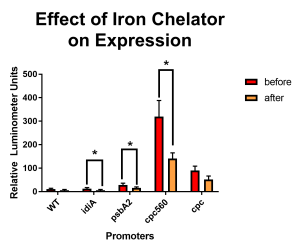 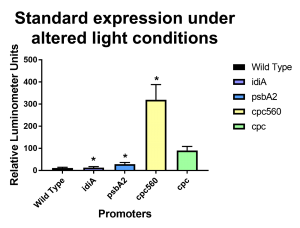 After removing outliers from the data set using the 1.5(IQR) rule and conducting unpaired T-tests assuming unequal variance, for expression after iron repression, idiA, psbA2, and cpc-560 all showed a significant difference between before iron chelator reagent addition and after [Figure 4]. cpc’s insignificant difference could be attributed to the fact that there were only two cpc samples, as a result of insufficient cyanobacterial growth. The significant decrease in the expression of cpc-560, however, as a result of adding the iron chelator, indicates that the cells may have died from prolonged deficiency of ferrous ions, therefore that one hour may have been too long [Figure 4].

When conducting our ferrous standard expression experiments, we had just replenished the media with antibiotics and left the untreated cyanobacteria as well as the treated cyanobacteria in our biosafety cabinet, not expecting any major changes in expression due to the light exposure. However, psbA2 was expressed significantly more than wild type [Figure 5]. We propose that this may be due to replenishing antibiotics in the medium or from the stress of leaving them in the biosafety cabinet.


psbA2 is a native promoter found in S. elongatus, among other cyanobacteria species. Though it is induced by higher light intensities, it effectively shows constitutive expression at constant light conditions [4]. The psbA2 promoter from the strain S. elongatus PCC 7942 and from S. elongatus UTEX 2973 share a 100% sequence identity (verified by NCBI BLAST search).

Their results indicate that psbA2 is a fairly strong promoter at high light intensities. 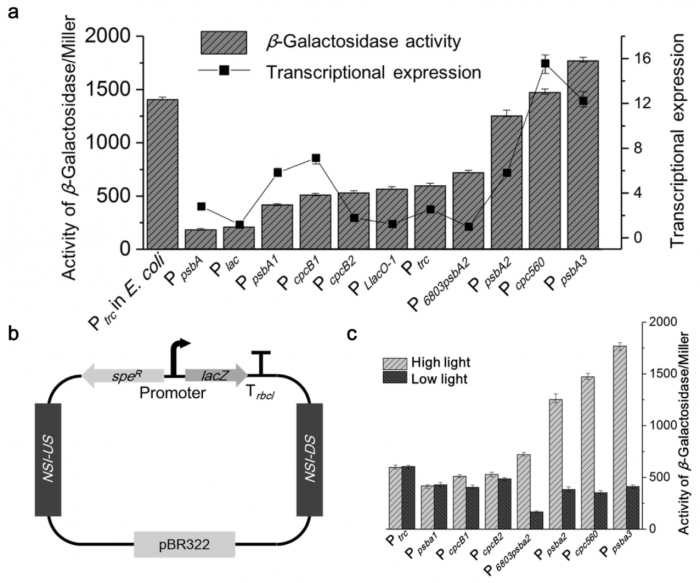