A dot-blot and a fluorescent measurement was preformed to confirm the function of this BioBrick which contains Amyloid-Beta and the fluorescent protein mNeonGreen. The results from the dot-blot can be seen in figure 1 compared to figure 2. Table 1 is a scheme explaining figure 1. From these figures, we could confirm that our bacteria was expressing proteins which have epitopes that the antibodies, specific to Amyloid-Beta, could bind to. This is confirmed by comparing the 4 marks in the second column with the 4 negative marks in the first. By the black marks in figure 1, where we added cell lysate from induced BL21 containing our BioBrick, we confirm the expression of Amyloid-Beta. From the weaker marks we confirm there is some leakage from the promoter.

Table 1. Scheme over how cell lysates were applied to the membrane:

Figure 1. To the left: dot-blot of induced and uninduced BBa_K2474000 as well as empty bacteria. To the right: the membrane as seen by the naked eye.

E.coli BL21 bacteria cultures with BBa_K2474000 was prepared overnight and the OD was later set to 0.4. The bacteria was distributed to a 96-well plate so that each well contained 200 µl. These were then induced by arabinose to express the fluorescent fusion protein Amyloid-Beta mNeonGreen. The fluorescence was then analysed on a plate reader. The original intent of this experiment was to analyse protein expression over time. However due to technical difficulties this was not possible. Instead figure 2 below represents emission spectra of the fluorescence from Amyloid beta mNeongreen 24 hours after induction. 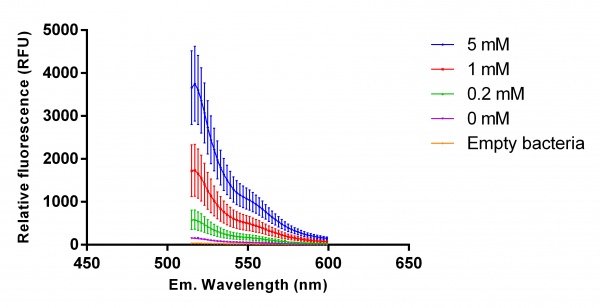 Figure 2. They were distributed in a 96 well plate in 8 replicate at each of the 4 induction levels (5 mM, 1 mM, 0.2 mM and 0 mM). Empty bacteria (BL21(DE3)) were also included on the plate to serve as a control. All measurements were done with an infinite M1000 pro plate reader. Due to technical difficulties and lack of an mNeonGreen fluorescent standard curve it was impossible to present this data in the preferred unit (µM/OD). The data points represent the mean value of the replicates and the error bars represent 95 % confidence intervals.

This graph in combination with the dot-blot above confirms that our biobrick (BBa_K2474000) is fully functional.