RdhANP is a native protein of Nitratireducror pacificus pht-3B. It is codon-optimized for operated and expression in Bacillus magaterium. RdhANP can catalyze the reduction of ortho-halogenated phenolic compound, which endows it with biological dehalogenation function. Different from other reductive proteins that are membrane-associated and oxygen-sensitive in their family, RdhANP is a soluble cytoplasmic one and oxygen-tolerant, which is fairly good for heterologous expression in other chassis. However, this enzyme displays a strict requirement for o-halogenated phenolic substrates and B12 cofactor; it also should under reductive condition using either reduced methyl viologen or NADPH.

For the verification of our enzyme, we constructed it into the vector pSPAsp-hp. Then the plasmid containing RdhANP was transformed into Bacillus magaterium through collaboration with FAFU-China. As for the expression, xylose was used as an inducer and the induction lasted for 12 hours under 37℃. After that, 800uM substrate(2,6-DCP was chosen by us as an representative according to the article) was added and interacted with our engineering bacteria for 2 hours under 17℃. Finally, our samples taken before and after the incubation were all tested through HPLC.

The results of HPLC was depicted as following: 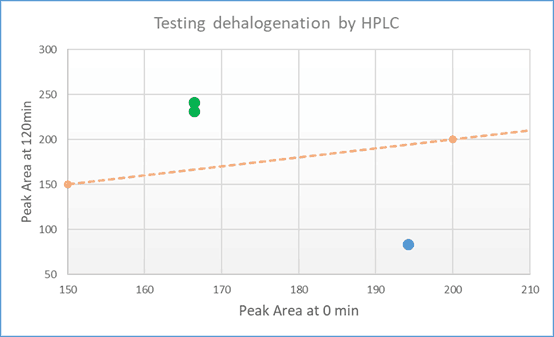 However, unfortunately, we are surprised to find that in the bacteria with RdhANP, even though they are induced to express RdhANP, the peak area in 120min can be even higher than it initially. At first we wondered if there are nonstandard operation during experiment, thus we did the experiment for another 2 times but nothing changed. Even the control group got the similar results. Later, we asked the teacher in Testing Center of WHU, and he figured out the problem in some way. He told us that some proteins existed in our sample, performing the peak area together with 2,6-DCP. So it’s difficult for us to specifically quantify the sample. We were quite disappointed and tried to find another way for the analysis.