This is an improved version of the Super Yellow Fluorescent Protein 2 (BBa_K864100) carrying an N-terminal nona-arginine tag, and a C-terminal hexa-histidine tag. The R9-tag is a Cell-Penetrating Peptide giving it's associated protein the ability to pass through plasma membranes.

For our study we demonstrated that this improved version of SYFP2 had fluorescence of similar levels to the original protein, and was able to stain both Escherichia coli and Pseudomonas putida cells, presumably through internalisation of the protein.

Previous studies have shown R9 associated proteins to be able to enter a variety of cell types (Chang et al., 2005).

SYFP2 is a monomeric GFP-based protein emitting a bright yellow fluorescence. It has an excitation peak at 515 nm, an emission peak at 527 nm and a relative brightness compared to EYFP2(Q96K) of 12.0 in E. coli.

Cell-Penetrating Peptides (CPPs) are small peptides, that are able to facilitate transport of a wide variety of cargoes across plasma membranes. CPPs are typically rich in basic residues and originate from viral domains such as the viral HIV tat domain (Eudes & Chugh, 2008). In recent years researchers have tried to make synthetic CPPs, with special interest in peptides constructed solely from arginine residues. The arginine rich sequences have been shown to trigger endocytosis in a wide range of cell types, including onion and potato cells (Chang et al., 2005).

The CPP-SYFP2 biobrick was constructed by amplifying SYFP2 using primers with overhangs designed for insertion into the USER cassette. The PCR product was then purified and ligated into the vector, before being restriction digested and sequenced.

The SYFP2 and CPP-SYFP2 proteins were expressed and purified in order to test for internalisation of the proteins in bacteria. All expression were done in BL21 Escherichia coli under control of the T7 promoter. Protein expression was induced with an IPTG concentration of 1.0 mM as optimal expression levels were found at this concentration. 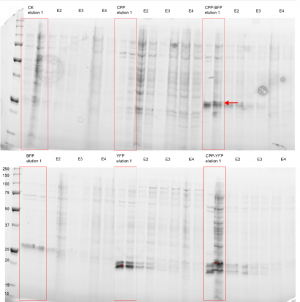 Cells were harvested, re-suspended in lysis buffer (25 mM Imidazole, 0.5 M NaCl, 20 mM Tris-HCl (pH 7.9), and 1.0 mM PMSF), and lysed by sonication. The cell debris was removed by centrifugation at low speed, and the supernatant was transferred to a new falcon tube and mixed with 100 µL Ni-NTA Agarose. The mixture was incubated for one hour at 4 degrees Celcius on a turning table, where after the beads were spun down and the supernatant removed. A series of elution buffers (0.5 M NaCl, 20 mM Tris-HCl; pH 7.9) with increasing Imidazole concentration were used to elute the bound proteins. The elution buffers were added consecutively 100 µl each time followed by centrifuging the sample at low speed, and removing 100 µL eluate.

NOTE: Samples were kept on ice at all times and centrifugation took place at 4 degrees Celsius.

The purity of the samples was analysed by subjecting them to an SDS-PAGE using a pre-cast stain free gel. In addition to SYFP2 and CPP-SYFP2, two versions of the mTag BFP biobrick were also purified. The Imidazole concentration of the purification ranged from 250 mM to 2.0 M, as can be seen on Figure 1 proteins of the expected size are eluted at Imidazole concentrations of 250 mM for all constructs (BFP & YFP 28kDa, CPP-BFP & CPP-YFP 30kDa).

In addition to CPP-SYFP2 the CPP-mTag BFP biobrick was also analysed. All fluorescent imaging was done at 100x magnification using the following setup:

BL21 E. coli expressing either SYFP2, mTag BFP, CPP-SYFP2, and CPP-mTag BFP were analysed on a fluorescent microscope at 100x magnification in order to see if the fusion proteins were capable of emitting fluorescent light as their parental counterparts. As can be see on Figure 2 the intensity of the individual cells were as bright with the CPP tag as without. 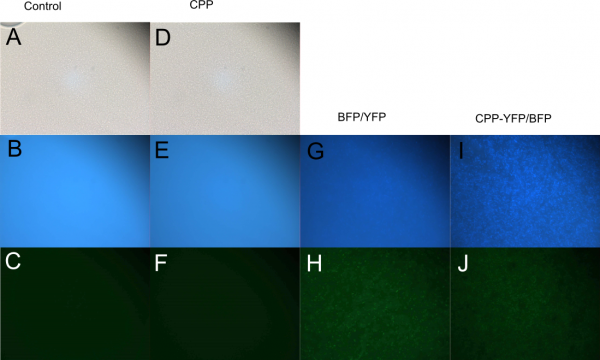 In order to investigate the capabilities of the expressed proteins to enter E. coli cells, 10 µL of E. coli MG1655 overnight culture was mixed with 25 µL purified protein from either Control (empty vector), SYFP2, mTag BFP, CPP, CPP-SYFP2, or CPP-mTag BFP and incubated at room temperature for 10 min. Subsequently the cells were pelleted and the supernatant was removed, followed by 2 x wash in 500 mL MQ H2O. Finally the cells were re-suspended in 10 µL MQ H2O before being imaged on the fluorescent microscope. As can be seen on Figure 3, while neither SYFP2 or mTag BFP alone were capable of staining the cells, both CPP-SYFP2 and CPP-mTag BFP were able too, thus indicating an ability of the Cell-Penetrating USER Cassette to facilitate internalization of their protein cargo.

In addition to E. coli, both Pseudomonas putida and Bacillus subtilis were similarly treated with SYFP2, mTag BFP, CPP-SYFP2, or CPP-mTag BFP following the same protocol as for E. coli (see above). While B. subtilis showed no signs of protein uptake (data not shown), P. putida showed similar signs to protein uptake as did E. coli (see Fig. 4).