Cholera is a serious current illness due to Vibrio choleraeŌĆÖs infection. This bacteria is transmitted by water and faeces, therefore there is a high probability of contamination in countries with severe sanitary issues. For instance in Yemen, one child is infected every 35 seconds in june 2017 (NGO Save the Children). This observation highlights the extreme emergency to fing solutions to fight infection, for which too little attention is paid.
iGEM Grenoble-Alpes 2017 team focused on the creation of a system which would enable the detection of a short sequence present in Vibrio cholerae genome. This sequence is a fragment of bacteriophage CTX DNA. This bacteriophage is involved in Vibrio choleraeŌĆÖs pathogenicity by integrating a part of its own genome which contains genes for cholera toxins production.
The target is a 39 bp sequence found in CTX RstA gene (implicated in the CTX phage DNA replication and integration), present in Vibrio cholerae O1 and O139. This chosen target is flanked with AluI restriction sites, so its digestion is necessary to free the target fragment with correct length.
The detector construction that Grenoble team created - a probe that binds perfectly to the target - was inserted in psB1C3 containing BBa_J04450 allowing the emission of red fluorescence.
Finally, the goal is to detect fluorescence with SnapLab: it is our homemade detection kit, displaying the results of the detection by measuring the fluorescence intensity with a smartphone.

The 2018 iGEM NYU Abu Dhabi designed a BioBrick that includes a gene that can be targeted for species-specific detection of Vibrio cholera.

Part BBa_K2808000 was designed by including N-acetyl glucosamine-binding protein A (gbpA) gene for the detection of Vibrio cholera. The gbpA gene in Vibrio cholerae codes for the N-acetyl glucosamine-binding protein A (GbpA), which is a chitin-binding protein involved in the attachment of V. cholerae to environmental chitin surfaces and human intestinal cells. The gbpA gene has been found to be consistently present and highly conserved in V. cholerae. GbpA has been used as a target gene for the species-specific detection of V. cholerae O1, O139, Non-O1/Non-O139.

Instead of the 39 bp sequence found in CTX RstA gene that is used by BBa_K2299000, part BBa_K2808000 uses gbpA gene for the detection of V. cholera. The advantages of using gbpA as a gene target compared to ctxA are various such as ctxA is involved in the production of the cholera toxin production which requires special safety precautions during bacterial transformation, lab experiments, shipping reagents, customs, etc. whereas the use of gbpA solves these problems as gbpA is not directly involved in the production of cholera toxin. 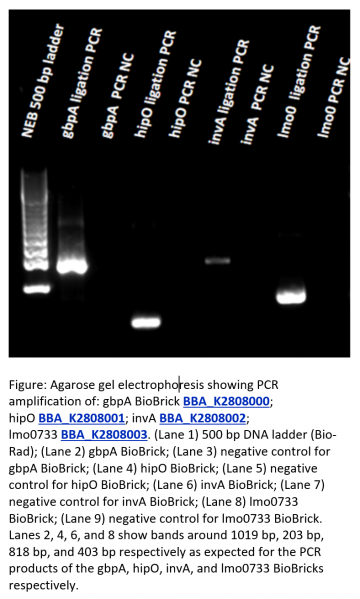