Not Released
Sample It's complicated
Experience: Works
5 Uses
Get This Part

This part consists of the nitrogen-sensitive promoter glnAp2 and its regulatory sequences. When in low-nitrogen circumstance, the promoter will be activated and start fast transcription, while high-nitrogen environment will suppress the transcription. For convenient usage, this part contains the riboJ and RBS BBa_B0034 as well.

In organisms, especially in bacteria like E.coli, there exists a common signal transduction system NtrB/C that senses the nitrogen concentration in the environment. When the nitrogen reaches an extremely low level, the pathway will be triggered and downstream promoters will be activated. Then the necessary proteins will be produced to help organisms survive in the hard time. 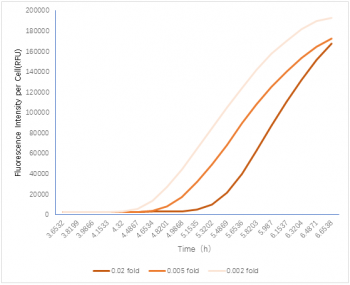 What's important is that, downstream promoters responding to the pathway are not regulated directly by the concentration of nitrogen sources. Or in another word, they are not triggered by the interactions between nitrogen and the promoters. Generally speaking, nitrogen deficiency first shuts down the intracellular metabolism of nitrogen, which causes the accumulation of certain intermediate products. These products then activate the protein NtrC by chemical interactions. Next, activated NtrC boosts the accumulation of itself in a positive-feedback way. Finally, enough NtrC is able to initiate downstream transcription by assisting the binding between the special RNA polymerase and their corresponding promoters. Click here for more details.

glnAp2 is a typical promoter involved in this signal transduction pathway. It efficiently responds to low-nitrogen signals and starts fast transcription. Hence together with a variety of reliable reporters, it can work as an excellent nitrogen sensor. Even better, this part can sense any single specific nitrogen source such as ammonia or ammonia acid, as long as the samples contain only one main nitrogen source.
In 2017, team UCAS used this part to construct an ammonia sensor for fishery ponds. Because the main nitrogen sources in fishery ponds are ammonia and nitrate, and E.coli has a remarkable preference to ammonium, they deduced that this part is qualified for ammonia detection in aquaculture. This hypothesis was verified by solid data(fig.2,5).

The nitrogen source used in all experiments below, if not specifically noted, is ammonium chloride.

Three promoters involved in the NtrC/B pathway, glnAp2, glnHp2 and astCp are compared here. We analysed their signal-noise ratio, delay time and max fluorescence intensity to see which promoter performs best. It is clear to see that glnAp2, the promoter composing this part, is the most suitable promoter for further engineering (fig.2,3,4).


Figure 2 shows the signal-noise ratio (SNR) of different promoters. Signal is the difference of delay time between two neighboring concentration of ammonium. Delay time is the time consumed before the report signal of fluorescence reached the threshold (start to grow from a previous steadily low level). Accordingly, the noise is the difference of delay time within the experimental group with same concentration of ammonium. This ratio shown in the figure is calculated by dividing signal by noise and average this number among different time and experimental group with the same condition (0.3 fold of casamino acid).

Figure 3 shows the delay time of different promoters. Delay time is defined above. This graph shows both average and max/min value in experimental groups with the same condition (0.002 fold of ammonium, 0.3 fold of casamino acid).

Figure 4 shows the max signal of different promoters. It shows both average and max/min value in experimental groups with the same condition (0.002 fold of ammonium, 0.3 fold of casamino acid). 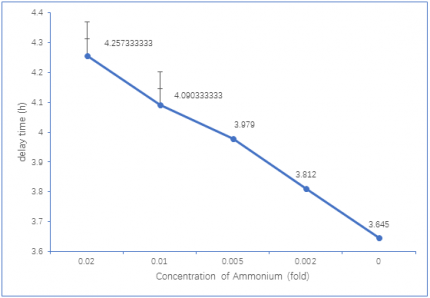 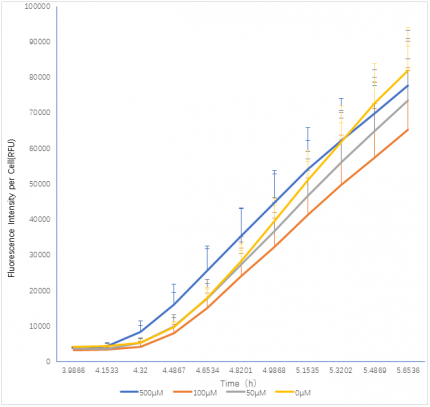 Figure 6: Kinetic curves of glnAp2 over time of glnAp2 under different concentrations of potassium nitrate. The strength is represented by the quotient of fluorescence intensity over OD 600.

In addition, this part reveals predictable behavior and high resolution to nitrogen concentration (fig.5). On the one hand, the concentration of nitrogen and the response time shows a obvious linear relationship. On the other hand, the high signal-noise ratio implies that the sensor is usable even when ammonium reaches extremely low level.

Kinetic curves shows that nitrate does interfere this part detecting ammonium (fig.6). However, this interfere is quite weak when the concentration of nitrate is low, which can be ignored in application.