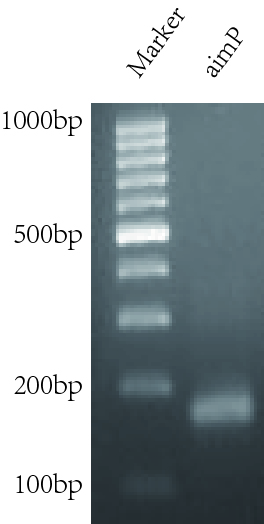 Then we inserted this gene to plasmid pSB1C3. We transformed this recombinant plasmid (one contains gene AimP) into strain DH5α (E. coli). Then we picked some colonies for cultivation and extracted the recombinant plasmid, which was verified by PCR and sequencing. From the result of electrophoresis, we confirmed the transformation of AimP was success. 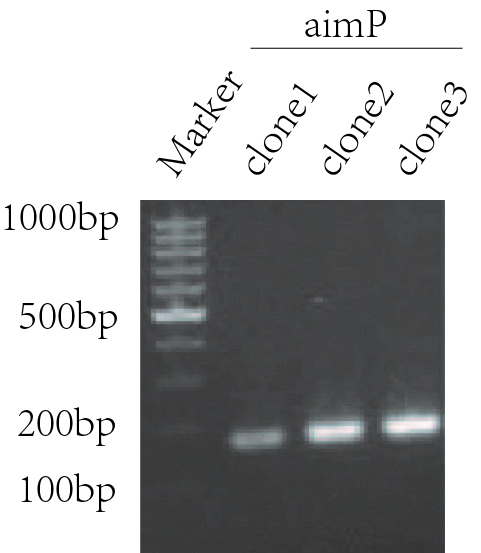 The B.subtilis bacteriophage phi3T employs the AimR-AimP QS system to make the lysis-lysogeny decision. AimP is the pre-pro-peptide. It is 43aa long. The mature signal peptide of AimP is SAIRGA. Binding of the mature signal peptide to AimR will disrupt the dimer forms of AimR. After that, the AimR can no longer bind to the promoter of AimX, a potential non coding RNA involved in the process of lysis-lysogeny. 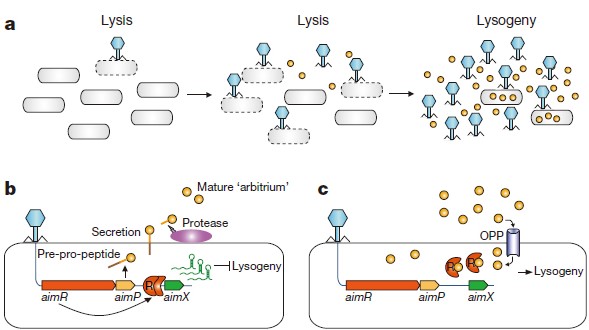 By combining the expression of AimR and AimP components, we want to develop a synthetic QS system in B.subtilis for target gene autoinhibition. 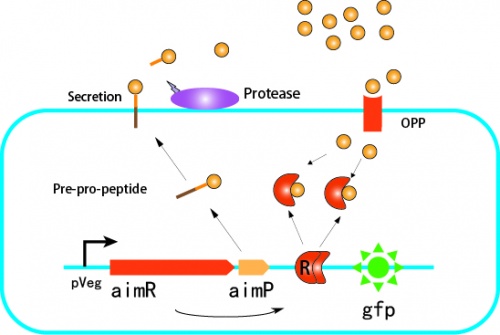 Figure 1. The design of autoinhibiton system

Figure 2. The design of AimR-AimP based Sender and Receiver cells.

This part is not functional in Escherichia coli even after it has been codon-optimized for it (BBa_K2675001): when expressed in E. coli as the composite part BBa_K2675041, it was not able to produce and release detectable levels the mature hexapeptide SAIRGA in the culturing media of E. coli cells.

This part has been improved to be functional in E. coli: produce and secrete the mature arbitrium peptide of phage phi3T (SAIRGA). For this, the signal secretion of AimP was replaced by the OmpA secretion signal (BBa_K2675002). When expressed in E. coli as the composite part BBa_K2675042, the mature hexapeptide SAIRGA was produced and released in the culturing media of E. coli cells.