The P8 constitutive promoter is natively found in the genome of Lactococcus lactis [1]. Although the transcriptional efficiency of this promoter has been characterized and tested in Lactococcus lactis and other Gram-positive bacteria, its functionality in Gram-negative species such as E. coli has not been recorded in the literature. We have confirmed that E. coli transformed with a cassette plasmid containing the P8 promoter and E2-Crimson reporter is able to successfully express the E2-Crimson red fluorescent protein.

As a PhytoBrick compatible part containing the proper overhangs specified by the iGEM PhytoBrick standard, the P8 promoter can be assembled into a transcriptional unit via Golden Gate assembly to upregulate expression of a gene of interest in E. coli as well as L. lactis. For more information about the PhytoBrick standards set by iGEM, click here. Top10 electrocompetent E. coli cells were transformed with the P8 cassette assembly and plated on LB + CAM plates. After one day of incubation at 37°C, there was growth of purple-blue colonies, which fluoresced red when placed under UV illumination (Fig. 2). The observed red fluorescence phenotype was likely due to the P8 promoter successfully directing expression of the E2-Crimson reporter gene. From this result, we concluded that the P8 constitutive promoter is indeed functional within E. coli and can thus be used to overexpress genes of interest in E. coli as well as L. lactis. Characterization of the promoter in E. coli using GFP and qPCR


In order to measure the expression strength of this part from Lactococcus in E. coli we placed a GFP and a terminator downstream of this sequence. The final construct designed for this characterization consisted on the following iGEM parts: K2253000+E0040+B0015. This sequence was ordered in a Twist Bioscience plasmid with ampicillin resistance and cloned into iGEM plasmid pSB1C3 with chloramphenicol resistance.


As reference for comparison of promoter strength, we also synthesized with Twist Bioscience three constructs with well characterized Anderson Promoters and the putative RBS that the reference article of this part indicated. However, when we cloned those parts in E. coli there was no GFP expression. That suggests that the putative RBS from this part is not annotated correctly.

Figure 3. Visual differences between this part and standard biobricks for InterLab iGEM2016.

The three GFP cassettes and a negative control with no GFP expression (R0040) were cloned in E. coli dh5α. A growth curve was established in 125 mL Erlenmeyers with 60 mL of LB supplemented with chloramphenicol. The Erlenmeyers were inoculated with an overnight culture of each transformant with a different promoter in the GFP cassette (J23101, J23106, K2253000 and R0040 as control). The curve was started with an OD600 0.05. This was done in triplicate. It was incubated for 9 hours at 37°C and 200 rpm. Samples for GFP (485nm, 528nm) and OD600 quantification were taken every hour and measured in a Tecan Biotek plate reader (Fig. 4). Non paremetrics statics analysis were implemented with Minitab 19 Statistical Software (2019).

Transformants with J23101 promoter and K2253000 cassette were also tested for qPCR. This allowed us to compare transcripts and protein expression, which is important as it was not possible to test only the promoter strength due to the lack of a correct annotated RBS in this part, as was before mentioned.
For mRNA extraction samples were taken every two hours. Promega® kits were used for the RNA total extraction and the retrotranscription assays. SYBR Green I Master Mix was used to set the qPCR and a LightCycler® 480 equipment determined the measurement and the calculations required by its own software (Fig. 5).


To determinate the expression strength we used the primers set F:(5’CAATTGGCCATGGCCCTGTC3’) and R:(5’GCCATGTGTAATCCCAGCAGC3’) to analyze the GFP (BBa_E0040) expression and the set F:(5’GCGGTTTCGGCAGTTTCT3’) and R:(5’CGCAGTTCTTTACCAGGTTT3’) that amplify the ihfB house keeping gene. 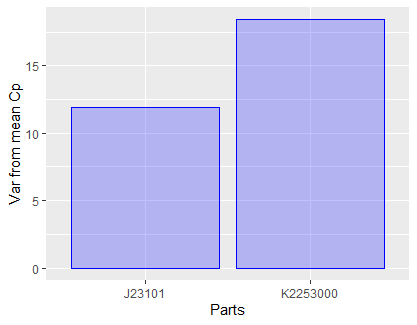 We concluded that this part has a higher relative strength than the strongest Anderson promoter in E. coli dh5α, quantified by qPCR and fluorescence curve. However, this has no statistical significance (p=0.05), possibly because of the low amount of data.


Moreover, results obtained suggests that the RBS has not a relevance difference in expression compared to the Elowitz RBS. The previous conclusion was inferred by comparing both assays, GFP traduction and transcript expression, because they both keep the same tendency. This suggests that possibly the difference in the amount of protein finally achieved is primarily consequence of the promoter strength and not the RBS. In addition, we recommend further iGEM teams to test some assays to identify the promoter and RBS real sequence in the part K2253000.