Cry4Aa is cloned from Bacillus thuringiensis BRC-LLP29. It shows specific toxicity to Culex by bioassay. The Cry protein is consisted of three functional domains. Domain I is a seven α-helices bundle. It can insert itself into a membrane by using its hydrophobic helices α4 and α5 to insert into the phospholipid bilayer. The pore formation occurs on its α3 helix. Domain II and domain III are two β-sheets which are involved in the receptor interactions. Domain II contains extremely variable loops, which are the binding site of the receptor. Domain III has the function of stabilizing the toxin. Cyt proteins have a single α-β domain which do not bind to receptors but can directly insert into the cell membrane and then form a pore causing cell death. Although Cry and Cyt proteins are two big families of δ-endotoxins, they are far related.Cyt1 and Cyt2 are two types of Cyt proteins found in Bti.. Generally, Cry proteins are believed to exert toxicity by interacting with the proteins on the brush border membrane and then insert into the membrane which takes multiple steps. At the beginning in mosquitoes' gut, the crystalline inclusions are cleaved at the disulfide bond to release the Cry pre-toxin. Then the soluble proteins are activated by being cleaved again by intestinal protease. When toxins reach to the brush border membrane microvilli, they bind to the proteins, or known as receptors on the membrane. The binding process takes two step. Firstly, the monomeric Cry toxin binds to cadherin, resulting in the formation of pre-pore oligomer as Figure1. 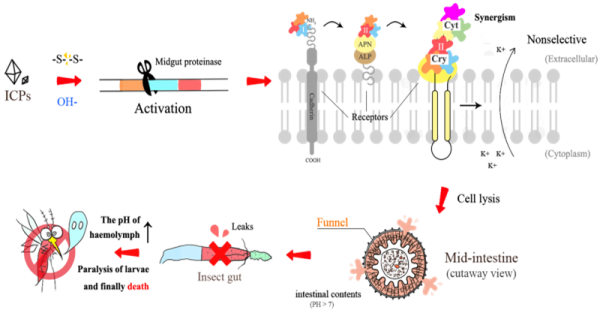 Then the oligomer binds to a GPI-anchored APN or ALP. Secondly, the previous binding induces the oligomer insertion into the lipid rafts membrane. A formation of ion permeable pore is followed by the insertion which allows small molecules to pass through the membrane. The membrane potential inevitably changes greatly, causing the swelling of cell and finally breaking down. When the cell lysis reaches to a certain degree, the midgut necrosis and epithelial denaturation follow. Then, the alkaline hypertonic inclusions in midgut enters into hemocoel and the pH of haemolymph rises causing paralysis of larvae and finally death. To increase the express level in Chlamydomonas reintmrdtii, we synthesis Chlamydomonas reintmrdtii codon optimized Cyt1. Meanwhile, we added 2A peptide sequence at the end of 5’ According to the published paper and the result of Swiss-model, there is no effect to the toxicity of Cry or Cyt. Users can use infusion technology to link the express vector to express toxins. 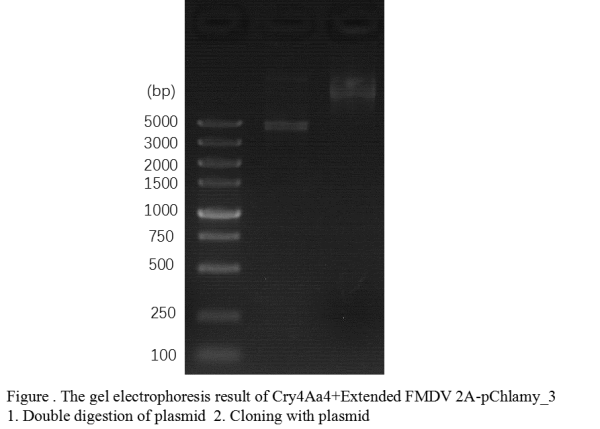 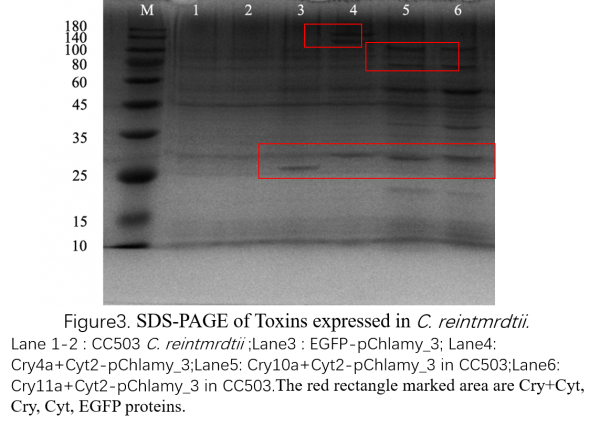