In the last few years, hydrogens made from natural or synthetic polymers have been investigated due to their extensive application in clinical medicine and synthetic biology. Comparing to traditional biological material, protein-based multifunctional biological material is low-cost, facile and eco-friendly. However, strategies for assembling 3D molecular networks synthesized only by protein molecular remain underdeveloped. The reason why investigating this technology is still tough is lack of protein-based cross linking agents.

Inspiring from the self-catalysis of isopeptide bond between Lys and Asp in Streptococcus pyogenes fibronectin-binding protein FbaB, researchers split the catalytic domain and obtain two peptide called Spytag(the short one) and Spycatcher(the long one) which are able to form isopeptide bond with the other without any assistant. By fusing Spytag and Spycatcher with functional domains respectively, researchers solve the problem tactfully. In order to using Spytag and Spycatcher system as scaffold, we fused three Spytag spaced by (VPGVG)4 with 6xHistag in N-terminal another functional protein called amilGFP in C-terminal. This functional protein is obtained from BBa_K592010 (http://parts.igem.org/Part:BBa_K592010").

Whether in E. coli or Bacillus Subtilis, the secreted proteins usually contain signal peptides that are essential for export from the cytoplasm. Signal peptides are at the N terminus of target proteins and can be cleaved after secretion. Both E. coli and Bacillus subtilis rely on Sec or Tat machinery to traverse the inner membrane. Detailed description is shown in Figure.1, where three distinct ways are depicted. 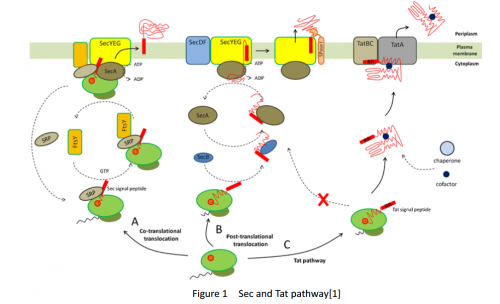 As several attributes of our target proteins, such as 3A-SUP, 3B, 3A-mSA, etc. remained unknown, especially their folding state in cells, we were unable to rationally design or choose a signal peptide for each. Nevertheless, we could build a Signal Peptide Repertory to screen for the best SP candidate. Our ultimate goal was to select the most appropriate ones from a huge amount of signal peptides, but owing to the limited time, we had just chosen a limited number of signal peptides to test for its potential to secrete our target proteins. Based on previous studies on their performance of secretion, OmpA was selected in this part.

His-tag is an amino acid motif in proteins that contains at least six histidine residues and is widely used for recombinant protein purification because of its affinity for bivalent nickel or cobalt ions.

FlAsH-tag is an alias for a tetracysteine-motif-tag (-FLNCCPGCCMEP-) which binds with high affinity and specificity to a biarsenical dye FlAsH-EDT2 and forms a fluorescent compounds.