Green fluorescent protein under control of a constitutive promoter, with attachment-site-plasmid (attP) of phage λ, flanked by bidirectional terminators. By genomic integration of this part into bacteria carrying the bacterial attachment site (attB), the metabolic burden on the microorganism can be quantified measuring the GFP concentration. The genomic integration is achieved by attP/attB recombination and catalysed by the λ-integrase.

Figure 1: Scheme of the λ-integration system. The λ-Integrase cuts at the attB-; and attP-site, with the help of IHF (Integration Host Factor), which is naturally located in E. Coli (shown in detail here: BBa_K1976001)

The design of our plasmid follows its function. Its usage is to generate a measurement strain to detect the metabolic burden of cells caused by synthetic plasmids, inspired by F. Ceroni et al.1,2. Our plasmid shall produce the lowest possible stress to the cell, this is why we flanked our attP-site with bidirectional promoters (BBa_B1001) to prevent transcription of the hole plasmid. To accomplish a minimum of noise, it is necessary to have just one copy of a reporter under the control of a constitutive promoter, in our case GFP (BBa_E0240) and (BBa_J23101) , in the cell. The reporter has a LVA-Tag added, for constitutive degradation of the fluorophore - otherwise it would not be possible to measure a decline of the signal of fluorescence. Genomic integration though, is not possible without BBa_K1976001.
It is to mention, that you have to be cautious with transformation of this Biobrick on low copy vectors. We showed, that under the stress of a heat shock a transposase can transpose into our plasmid. We described our observations in experience.

Selection of the Promoter

To get a expression, as gentle as possible, but as strong as needed, we tried three different Anderson promoters: BBa_J23101, BBa_J23115, BBa_J23109 (from strong to weak). As seen in Figure 2, only our strongest used promoter (J23101) showed a detectable signal. Though we sure could measure the other reporters, it was important for us to have a practical solution, for efficient work in the lab.

Figure 2: Determination of GFP fluorescence under control of different Anderson promoters on a UV-Transilluminator. The signal of GFP expression induced by our weak promoter J23109 (left side)and the middle promoter J23115 (center) are not detectable. Our strongest promoter J23101 (right side) shows a significant signal of GFP.

It is important to mention, that you have to use this Biobrick for a functional genomic integration, because we detected mistakes in three bases in the Biobrick provided by iGEM. The problem is that the bases are located in the center of the homologous region of the attP-site, which is significant for the recognition by the λ-Integrase. 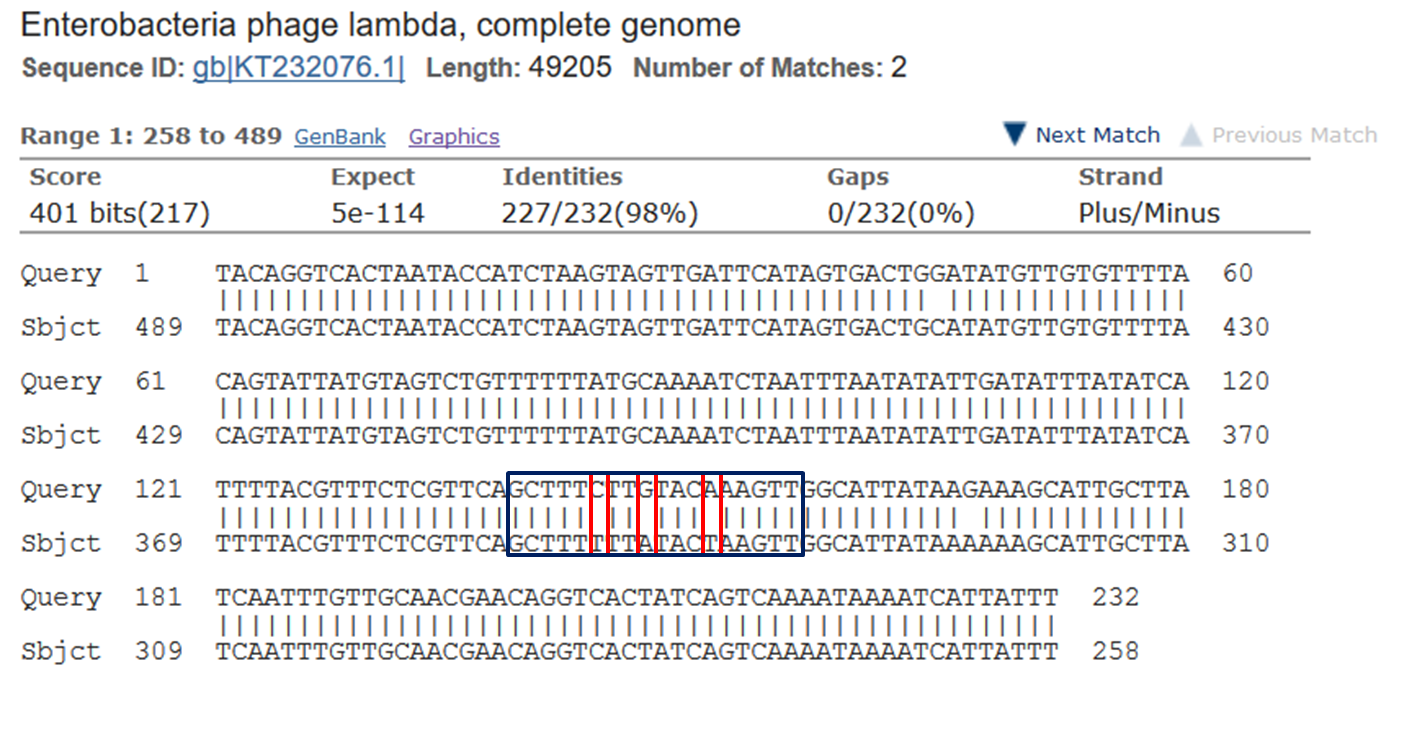 As we want to measure with a high accuracy and minimize any noise, it is important to have just this one copy of genomical integrated GFP. This is why, we thought about several methods of plasmid curing. Unfortunately all methods require a lot of time and samples to pick and in some cases we need reagents, we could not get. Hence, we just want to give a theoretical outlook, of different possibilities:

There are several chemicals described to be used for plasmid curing. One really common and mostly available is ethidium bromide. However, Spengler et al.3 are in doubt about its efficiency. They show alternatives, especially in the class of Phenothiazine derivatives. In this class, the best tested chemical was 2-Chloro-10-(2-dimethylaminoaethyl)phenothiazine. Unfortunately we could not find any company, that offers this really special reagent, so you propably have to synthesis it by yourself.

This option could be the natural selection by growth advantage of plasmid free cells. Because of our genomically integrated kanamycin resistance, we could just grow our cells on kanamcyn, which prevents us from contamination, but still gives an advantage to cells without plasmids. The big question here is the likelihood of spontaneous plasmid loss after cell division. Cooper et al.4 described a mathematical simulation of this process concerning the advantage of plasmid-free cells against plasmid-bearing cells, aswell as the likelihood of loosing all plasmids after one division and the number of generations, the cells will divide.

On the assumption that the allocation of the plasmids to the dividing cells is evenly distributed, we can set [M = 0,5^number of plasmids]. As the growth rate difference we orintate ourselfs on a value used in an example in the paper: [dµ = 0,03]. Adding a generation time of 46 and 0 plasmid-free cells at the beginning, we can make the following equation:
$$ p_{-} = \frac{ \left( 0 \cdot 0,03 + 0,5^5 \right) \exp \left[ (0,03 +0,5^5)46\right] - 0,5^5 \left(\ 1 - 0 \right) } { \left( 0 \cdot 0,03 + 0,5^5 \right) \exp \left[ (0,03 +0,05^5)46\right] + 0,03 \left(\ 1 - 0 \right) } = 0.630075 \approx 63\% $$
In trust of this result (63% plasmid free cells), it would be really easy to pick plasmid-free cells, just after one day of incubation. But (a really big but), the division does not pass evenly distributed. Michal Dmowski et al5 and many others describe a plasmid-encoded partition system, which in general is composed of "a cis acting centromere-like site (parS sequence), and a bi-cistronic par operon encoding: a DNA binding protein (ParB-like protein) which binds to the centromeric site, and an NTPase (ParA-like protein) which is thought to deliver energy and the dynamic scaffold for plasmid molecules to be moved towards cell pole." Though this system seems to melt down our hopes given through the equation, we also found hints, that this system might be prone to error. Thus, we do not really know, we suggest to try it in combination with the previous treatment of ethidium bromide.

This plasmid, described by Hale et al.6is able to stop the replication of other plasmids. pCure itself can be get lost because of it's thermosensitive ori. The main advantage according to the paper is the suppression of so called postsegregational killingsystems (PSKs). Plasmids produce a toxin, which can be activated after their loss. Known systems can transcribe a slowly activating mRNA, coding for the toxin or translate the toxin directly. pCure, a plasmid itself can suppress the activation of the toxin and does not produce it itself.