A pH Sensing Device Based on The GadA Promoter

Bacteria have a variety of environmental response mechanisms; the GAD (glutamate decarboxylase) system in E. coli has been suggested to be the most effective response to environmental acidic conditions. This system uses two main isoforms – gadA and gadB and a putative glutamate/Q-amino butyric acid antiporter encoded by gadC3. By decarboxylation of glutamate the protons that leak into the cell can be consumed. The end product, γ-aminobutyric acid (GABA), is then transported out of the cell by GadC4. The control of this system is very complex involving two repressors (H-NS and cyclic AMP receptor protein), one activator (GadX), one repressor activator (GadW) and two sigma factors (σS and σ70).

In 2013 the Northwestern iGEM team submitted two pH sensitive promoter Pasr (BBa_K1231000) and PgadA (BBa_K1231001). In order to further characterise both of these promoters we cloned gfp (BBa_E0840) downstream of both promoters. We then used this construct to measure and compare the GFP expression levels in response to different pH conditions.

We wanted to test both our pH sensitive promoters, Pasr and PgadA by monitoring for the production of GFP by western blotting. The western blots showed levels of GFP protein production by the cells at a range of pH values. In Fig 1A the expression of GFP at pH 5 is much higher than the other pH readings. This would indicate that at this pH the largest amount of GFP was being produced under the induction of the gadA promoter. The promoter is slightly leaky as there is also expression of protein within cells at other pH values. In Fig 1B the GFP protein expression under the regulation of Pasr can be seen, the range of activity for this promoter is much wider indicating that this promoter is leakier than PgadA. The level of expression of GFP under the regulation of Pasr appears to be uniform with only a slight increase in GFP at pH5.

We now wanted to be able to use a more quantitative approach to assign optimal promoter function conditions. To do this we used a 96 well plate reader to monitor GFP fluorescence and cell growth over the space of 20 hours. This experiment took obtained GFP fluorescence (excitation wavelength = 395nm and excitation wavelength = 509nm) and OD600nm values every 20 minutes yielding a large volume of data and more quantitative values for promoter function over 20 hours. To normalise flouresence measurements we used the following formula:

The data was then plotted to observe the trend over time as well as taking a snap shot at 16h. The data collected from the plate reader experiments showed a slight difference in optimal pH for the pH sensitive promoter asr, as can be seen in Fig 2B and 3B the maximal fluorescence observed from GFP fluorescence per unit of absorbance over time was at a pH range of 8. For PgadA we observed a coherent trend of optimal promoter function around pH5/pH6 as can be seen in Fig 2A and 3A. 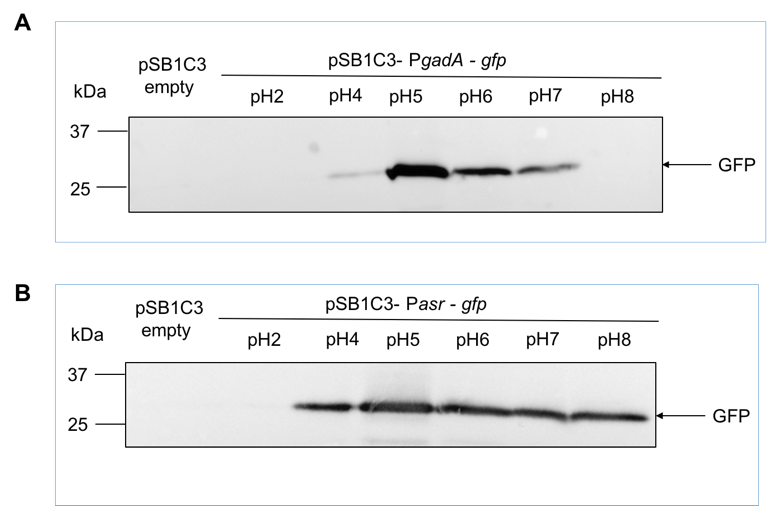 Fig 1. GFP production under the control of pH sensitive promoters PgadA and Pasr. Promoters with gfp cloned downstream of them were transformed into MG1655 E. coli cells, 5 ml of these cells were incubated for 16h at 37oC. After 16h, 200 uL of the overnight cultures were introduced into 1.8 ml of MOPS pH adjusted LB for the respective pH values indicated above. After 20 min at ambient conditions a 1ml aliquot was pelleted. The pellets were re-suspended in 100 ul Laemmli buffer and 15uL samples were then separated by SDS PAGE (12% acrylamide) and transferred to PVDF membrane followed by probing with anti-GFP antibody. Fig 1A - Shows the GFP production under the control of the PgadA and Fig 1B shows the GFP production under the control of the Pasr promoter both in varying pH conditions. 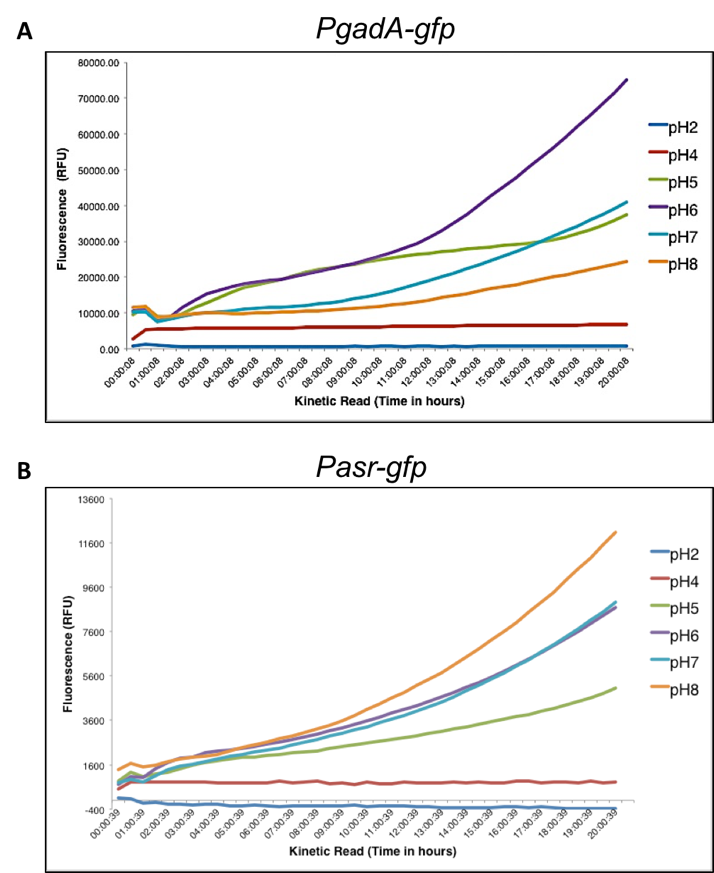 Figure 2: 96 well plate reader experiments. Full time frame showing trends in GFP per unit of absorbance over 20h. The two pH sensitive promoters cloned with downstream gfp were transformed into MG1655 E. coli cells, 5 ml of these cells were incubated for 16h at 37oC. After 16h, 200 ul of the overnight cultures were introduced into 1.8ml of MOPS pH adjusted LB for the respective pH values. 200 ul of each pH-cell buffered LB was transferred into each well. A negative control containing no cells and a negative control containing non-buffered fresh LB were also transferred in 200ul samples into the plate. Data represents the mean value of 3 repeat samples for each construct. Fig 2A - shows GFP fluorescence for PgadA-gfp and Fig 2B - shows GFP fluorescence for Pasr-gfp 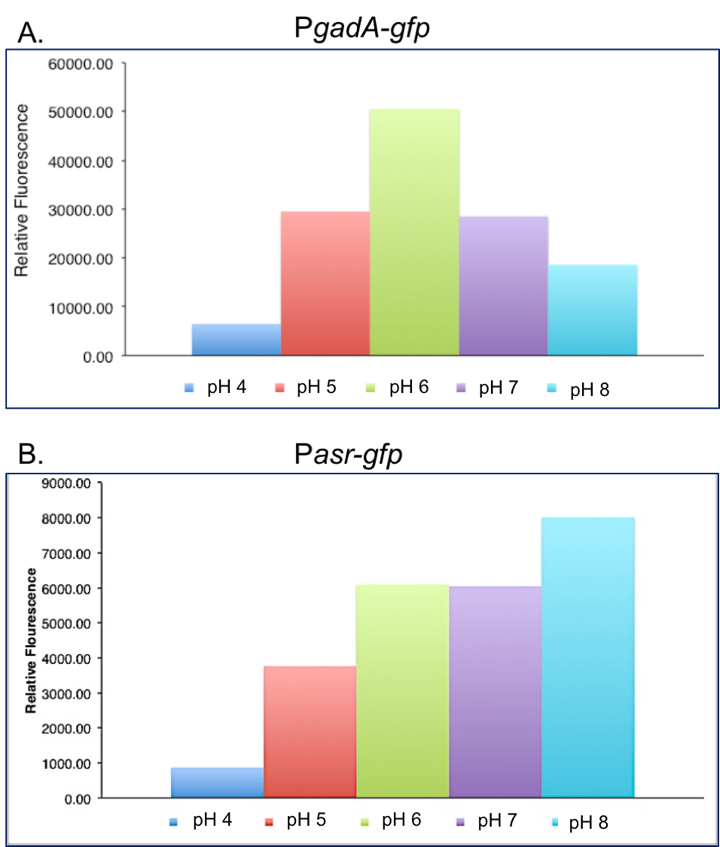 Figure 3: 96 well plate reader experiments. 16h time snap-shot out of the total 20h which can be seen in Fig 2. 16h was the average time of overnight cultures thus this would have been enough time for the cell growth to stabilize and adapt to the conditions. Fig 3A - shows GFP fluorescence for PgadA-gfp and Fig 3B - shows GFP fluorescence for Pasr-gfp

The pH sensing system, our side project, is a system that allows us to monitor the pH in the surrounding medium in our device at any time by observing the color change of the medium.

We selected two pH sensitive promoter from E. coli: Pasr and PgadA. PgadA will be induced under neutral condition while Pasr will be induced under acidic condition. We cloned a GFP and sfGFP gene downstream of these promoters respectively, whose product will express green fluorescence once the promoter has been activated. For the design of PgadA sensing system, we took the previous constructed PgadA biobrick BBa_K1962013 from 2016 iGEM Dundee team as our reference. We also improve the PgadA biobrick to enhance the expression of GFP. 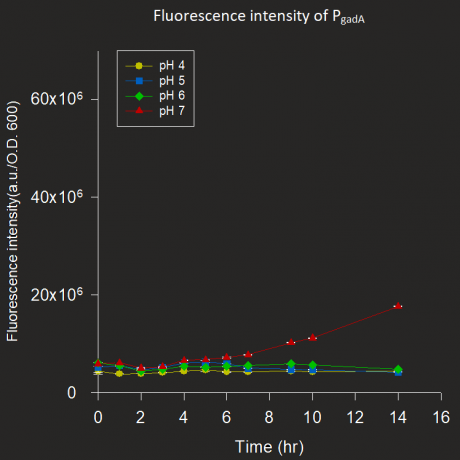 After analyzing the experiment result for our pH-sensing system, we have concluded that we should try to improve the previously constructed pH-sensitive promoters by 2016 iGEM Dundee team, PgadA (BBa_K1962013). We found out that although PgadA can be induced under neutral and weak acidic condition. But the fluorescence intensity is too low to be observed. We planned to increase the fluorescent intensity and shorten the time interval of induction. Thus, we added a RiboJ sequence at the downstream of the PgadA.

Based on our research, RiboJ was first described as an insulator in genetic construct but there has no any data shown this insulation affected the downstream genetic parts. The mechanism of RiboJ is that the upstream sequence, as well as RiboJ sequence, will cleave after the transcription. The cleavage of promoter and RiboJ sequence aids the design of predictable genetic constructs. The 2016 iGEM William and Mary team has reported that RiboJ could increase the expression of the downstream gene. Hence, we decided to enhance the expression of PgadA by adding a gene, RiboJ at the downstream of promoter gadA. 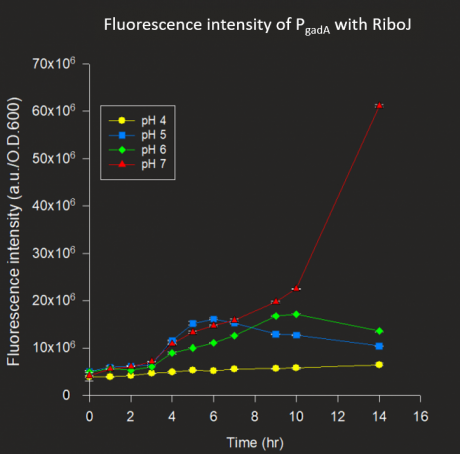 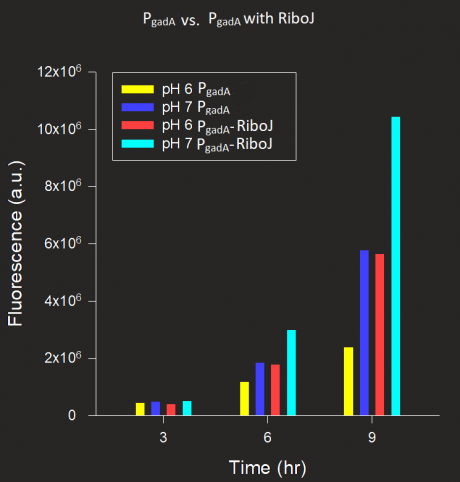 Fig 3. The fluorescence of PgadA and PgadA-RiboJ in pH 6 and pH 7.

We observe that with the RiboJ sequence, the fluorescence intensity has risen dramatically at the 14th hour. We also compare the fluorescence at 3rd, 6th, and 9th hour. The fluorescence of the strain that contains RiboJ is more than that does not contain RiboJ. We can conclude that by adding the RiboJ sequence to the construct, the expression of fluorescence protein is increased. We can also conclude that RiboJ could also strengthen the signal and increase the specificity of the downstream gene of it. We improve the PgadA part so the difference of the surrounding pH condition can be observed easier.