INPNC codes for N- and C- terminal domain of Ice Nucleation Protein (INP) from Pseudomonas syringae , fused to 6xHis tag to be easily identified by Western blotting[1]. This is used as an anchoring motif for the cell surface display of passenger proteins. This domain does not have signal peptide for anchoring on the cell surface[2]. Surface displayed passengers retain enzyme activity even when it is linked to INPNC with 6xHis tag.
For more information, please visit our wiki

Ice Nucleation Protein(INP) used for our surface display systems is produced by P. syringae , a famous model organism among ice nucleation active (INA) bacteria. Although the freezing point of water is 0°C, pure water can supercool to -40°C before homogeneous ice nucleation randomly occur to form ice crystals. Generally, minimally impure water will freeze spontaneously before -15°C. However, INP produced by P. syringae causes ice nucleation as high as -2°C. This bacterium uses this property to form frosts on plants, causing damage and making the plants release nutrients for their growth[3].
INP is expressed as the ice nucleation site, expressed in the outer cell membrane. Modified INP is used as a surface expression system.

We further characterized functionality and improved BBa_K811005 from Penn 2012!!

We added His-tag to BBa_K811005. This addition introduces two new functions to the fusion protein:

Second, INPNC-His-(passenger protein) can be purified using His tag’s affinity to nickel columns even in denaturing conditions to recollect it from membrane fractions of E.coli . This would allow fusion protein detection even if the protein’s expression levels are low, further strengthening the first function. We tested this function by Western blotting. Sample was prepared by obtaining the membrane fraction from the E. coli lysate by ultracentrifugation, and solubilized them using 7M guanidine-HCl, then purification of the target protein using Nickel Sepharose(Fig1(b)).

These two results confirms the enhanced functions of INPNC parts (BBa_K811005) existing in the iGEM Regisrtry.

We constructed INPNC-His-scFv (scFv:a protein made from fusing a variable region of the antibody, VH, and VL, with a linker peptide) and BclA-His-scFv (BclA:another surface display module) encoding plasmids using this part. Then we transformed E. coli (strain:DH5α)with these plasmids, and observed its interaction with Norovirus-like particles (NoVLP, the capsid proteins of NoV) of NoV GII.4 strain. (Fig2) We observed NoVLP only on the surface of INPNC-His-scFv expressing E. coli , as NoVLP could not be observed in E.coli expressing BclA-His-scFv, (which may be due to low expression levels, seen in Fig2), this NoVLP is not unspecifically mixed with the sample. Thus we concluded that we observed the binding of our INPNC-His-scFv expressing E. coli to NoVLP. 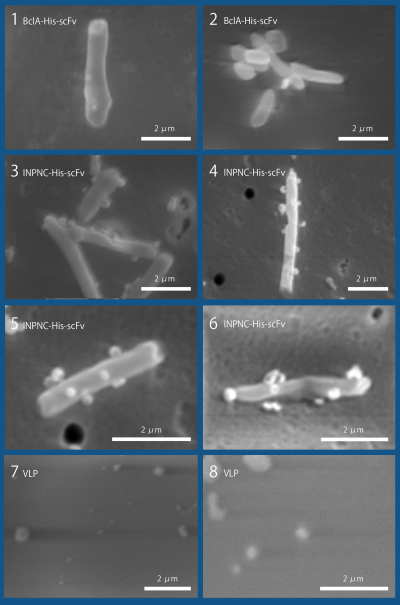 Thus, we conclude that this part successfully worked.

When comparing SEM pictures, we noticed that E. coli using INPNC-His system seems to be more elongated compared to those with BclA-His system. To confirm this, we determined aspect ratios of all E. coli from the SEM pictures using ImageJ (see Materials and Methods for more detail). By Welch’s t-test (two-sided), we found that E. coli with INPNC-His system was in fact more elongated than BclA-His system expressing E. coli. (p=0.0015<0.05).

Fig3: Growth curve
Measurements were done for 10 hours, but the graph only shows 4 hours of measurement since the medium saturated within 4 hours.

The results from growth curve and elongated shape both suggests that expression of INPNC-His-scFv to the outer membrane caused significant stress and deformation to the host E. coli.

We fulfilled criteria listed below with this part.