This operator, when paired with a guide RNA, expresses GFP.

The 2016 BostonU iGEM team designed a set of mutually orthogonal guide RNA (gRNA) expression vectors and gRNA operator reporters that could activate the expression of a gene of interest. This part contains a point mutation in the target sequence for gRNA 13 from BostonU’s Gemini Library (Part BBa_K1875010). The introduction of the gRNA leads to a significant fold increase in expression of the gene of interest in a gRNA operator reporter with a single binding site in comparison to the basal level tested without the gRNA. To decrease the expression of the operators, point mutations were made in the gRNA target sequence. This hypothesis was supported by previous research suggesting that a mutated operator reduces the binding affinity of the dCas9-VPR complex. BostonU used two mutation techniques: sequential mutation of a single base in the guide, beginning at the 5’ end, and clustered mutations at either base 1 or base 11. The point mutation was determined by whether the base was a purine or a pyrimidine and the complement of the base. If the base was a purine, it was mutated to be a pyrimidine and of the opposite coupled nucleotide (i.e: A <-->C, G<-->T). The graph below demonstrates a screen with point mutations on an operator containing g13 from the Gemini Library (guide sequence: GTTCTAAACGTTGGTCCGTC). BostonU 2016 chose to submit the mutant operator with a single point mutation at base 10 resulting in a sequence of GTTCTAAACTTTGGTCCGTC because of the near five-fold decrease in expression in comparison to the non-mutated operator. 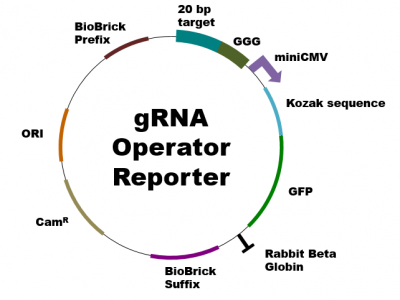 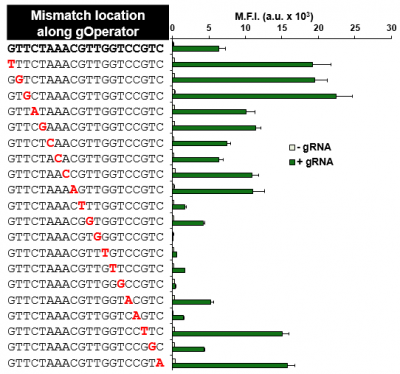 Figure 2: Screen of GFP expression in an operator reporter (containing g13) with sequentially mutated base.