This part is a promoter. It has a strong RBS restriction site following it which can guarantee the high efficiency of our project.

1.RBS has been used to quantify translational coupling in E. coli synthetic operons.(2013, 2(6), ACS Synthetic Biology). 2.Some people are researching the effect of mutations in the lac promoter and catabolite repression of the lac operon. (Yudkin, M. D., 2005)

This part is sequenced as correct after construction.

A double-enzyme digestion test was implemented to verify this part. 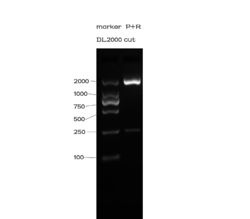 The length of the digested DNA fits the design.

The function of this part was examined by the GFP assay. The Plac+RBS30+GFP+Ter plasmid transfected E.coli BL21 (DE3) was cultured and IPTG induced. The groups without IPTG supplement were set as negative controls. Subsequently, the fluorescence intensity (abbreviated as FI, Ex: 488 nm; Em: 538 nm) were determined by the Fluoroskan Ascent FL (Thermo Scientific) every 2 hours. 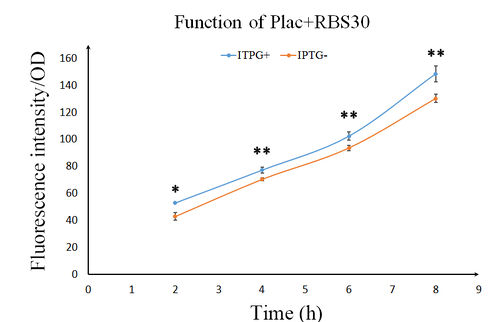 Figure 2. Evaluation of the Plac+RBS30 by split GFP assay. The green fluorescence (Ex: 488 nm; Em: 538 nm) of split GFP was detected every two hours after IPTG induction. Relative fluorescence intensity was calculated with normalization of OD600 value. This experiment was run in three parallel reactions, and the data represent results obtained from at least three independent experiments. **p<0.01, *0.01<p<0.05.