Not Released
Sample In stock
RFC: 23
No Results
4 Uses
Get This Part

This part is the coding sequence of the enzyme Indoleacetimide hydrolase IaaH. This enzyme catalyses the hydrolysis of indoleacetamide to indoleacetate and ammonia. This part is gathered from the 2-step pathway in Pseudomonas savastanoi producing the auxin, indole-3-acetic acid.

Indole-3-acetic acid (IAA), also known as auxin, is a plant hormone, which can promote growth and protect the soil from erosion. IAA can be synthesized through IAM pathway, originated from Pseudomonas savastanoi. Two important enzymes are contained in this pathway, AKA IaaM and IaaH.

The plasmid was cutted in a 20μL system at 37 ℃ for 2 hours. The Electrophoresis was performed on a 1％ Agarose glu. 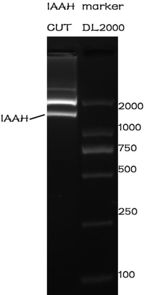 The result shows that this part can work as expected to generate IAA together with IAAM.

The 2018 UNSW iGEM team designed a new IaaH encoding part for improved functionality of the IaaH enzyme. A HisTag and GSG linker were added to the N-terminus of the enzyme, and a SpyTag and GSG linker was added to the C-terminus. Following these additions, the team was able to successfully express and purify the new part utilising the HisTag's affinity for nickel ions to purify the enzyme using IMAC purification (Figure 4). We also demonstrated the ability of IaaH with SpyTag to covalently bind with SpyCatcher proteins through SDS-PAGE (Figure 5). 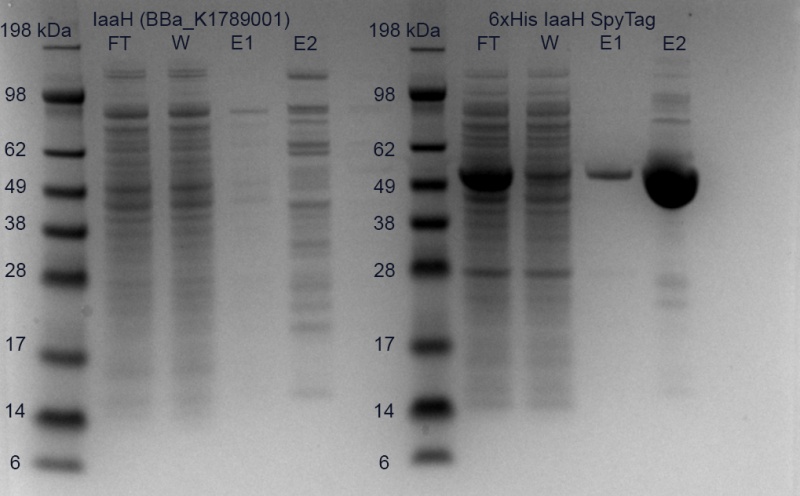 Figure 4: SDS-PAGE analysis of IMAC purification of IaaH (BBa_K1789001) and His-IaaH-SpyTag (BBa_K2710005). SeeBlue Plus 2 Pre-stained Protein Standard (Invitrogen) was used as the molecular weight standard. Lanes are labelled as flow through (FT), wash (W) and elutions (E1 and E2). The IaaH enzyme encoded by BBa_K1789001 was not His-tagged and thus unable to be purified by IMAC as seen by the absence of a distinct band at the expected molecular weight range (49 kDa). In contrast, the improved His-IaaH-SpyTag was successfully purified as reflected by the clear bands seen at the expected molecular weight range (53 kDa) in the elution lanes.