Insulin lispro is a rapid-acting insulin analog capable of lowering blood glucose levels; it differs from native insulin in that it has an inversion between proline al position B28 and lysine al position B29. This part has a constitutive promoter and an excretion signal from TAT system at its N-terminus.

Insulin lispro is a human insulin analog that dissociates more rapidly than human regular insulin after subcutaneous injection, resulting in higher insulin levels at an earlier point in time and a shorter duration of action1. We designed a sequence of constitutive expression for insulin lispro. Our aim is to express lispro as proinsulin containing peptide C and with a TAT sequence in its N terminus. This construct is expected to be expressed in Rossetagami and Shuffle, in these two strains where eukaryotic protein expression is enhanced we expect to have a fully former insulin with disulfide bonds. In a future we would replace the promoter of this construct for an OmpC promoter so that its expression can be modulated by EnvZ activation. 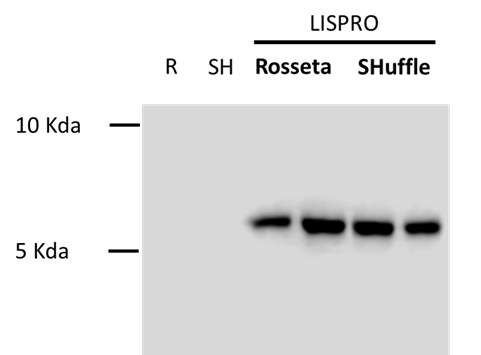 Insulin Expression in Rossetagami (R) and SHuffle strain. A western blot was performed with transformed strains with Lispro construct and controls from both strains. Our biobrick is expressed in the two strains, this result only confirms the protein is expressed but further analysis needs to be done in order to confirm fully formed insulin with disulfide bonds.