We use the device to tandemly express toxic protein Plu1537 and mCherry inE.coli BL 21(DE3).The toxin protein is used for termite control in our project and mCherry is a reporter.

The exact mechanism of insecticidal toxin protein Plu1537 remains unclear. In a 2009 research, scientists first expressed the plu1537 and purified the Plu1537 with GST tag. As a result, Plu1537 had insecticidal activity against two moth species (Galleria& Spodoptera) larvae via hemocoel injection instead of oral feeding.

We clone and standardize the gene into standard plasmid pSB1C3. After confirmation of digestion and sequencing, we transform the plasmid into E.coli BL21(DE3) to achieve better expression level.

We observe that transformants have obviously turned red and figure out the expected protein band in SDS-PAGE.According to in vivo experiments on termites, the toxin effect of Plu1537 is far more ideal than our expected by oral feeding.

In conclusion, we have successfully cloned and expressed the Plu1537 toxic protein in E.coli BL 21(DE3). Toxin effects of oral feedings on termites are far better than that described in research on moth larvae.

In 2009 research Expression and activity of a probable toxin from Photorhabdus Luminescens, toxin protein pit, which is 94% homologous with plu1537, is expressed in E.coli BL21(DE3). Engineered strain BL21 was both orally fed and injected in hemocoel to two kind of moth(Galleria mellonella & Spodoptera litura)(1). As a result, hemocoel injection is more effective than oral feeding. However, our experiment showed that oral feeding is also effective.

Bt family may be the most famous insecticidal toxin up to now. It’s one of biological toxins first used for pest control. After years of study, Bt family is becoming bigger and bigger. Basically, most proteins in Bt family form pores in cell membrane to kill a cell, including Cry34Ab1(2). 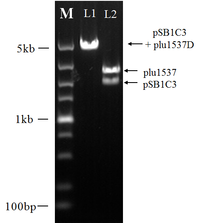 5-μl samples of the single (L1) and double enzyme (L2) digestion products for plu1537-device were loaded onto a 1% BioRad Ready Agarose Mini Gel, then subjected to AGE. See (protocol) for AGE parameters. We used PstI for single digestion, XbaI and PstI for double digestion, then products were determined by AGE analysis. The DNA size standards were the DL5,000 DNA Marker (M2; TaKaRa, Cat#3428A). Bands were visualized with a Shanghai Peiqing JS-380A Fluorescence Imager.

It can be clearly seen the plu1537 is constructed into the pSB1C3 backbone (Figure 3).

We have sequenced the parts with standard primers VF2 and VR. The sequence of the 2.5k part shows 100% agreement with the desired sequence. 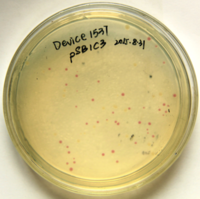 Figure 4 Expression of reporter mCherry in LB solid medium with arabinose and chloromycetin. 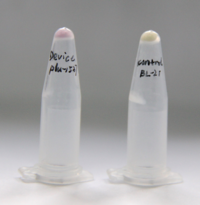 Figure 5 Expression of reporter mCherry in LB liqiud medium with arabinose and chloromycetin.

The solid or liquid culture medium is LB culture with 34ug/ml chloromycetin and 80mM arabinose.
Both the antibiotics and arabinose are added after the culture cools down to 60℃. 2%(w/v) of agar is added in solid medium.
It can be clearly seen that the recombinant turned red, indicating the expression of reporter mCherry(figure 4, 5). As mCherry is located behind target gene and shares a promoter with target gene, the target gene may be expressed to a great extent.

5ul sample is loaded in a 10% SDS-PAGE separation gel. We use 250kDa marker Precision Plus Protein? Dual Color Standards #161-0374. Parameters can be seen in protocols.

According to the result of SDS-PAGE (figure 6), target protein (14kDa) is strongly expressed (line 4) compared with the negative control, native BL21 (DE3) strain without engineering (line 1).

Judging from the SDS PAGE results and toxicity confirmation on termites, we conclude that the device plu1537 functions well. We successfully kill termites with toxin protein and our killing strategy proves to be effective and powerful.