We use the device to tandemly express toxic protein Plu0840 and mCherry inE.coli BL21(DE3). The toxin protein is used for termite control in our project and mCherry is a reporter.

The exact mechanism of insecticidal toxin protein Plu0840 remains to be revealed. In a 2007 research, scientists first expressed a GST-plu0840 fusion protein in E.coli BL21(DE3) with pGEX-4T-1 vector. The results showed that Plu0840 had weak oral toxicity against two kinds of moth and inhibited their growth (S. litura and S. exigua)

We clone and standardize the gene into standard plasmid pSB1C3. After confirmation of digestion and sequencing, we transform the plasmid into E.coli BL21(DE3) to achieve better expression level.

We observe that transformants have obviously turned red and figure out the expected protein band in SDS-PAGE. According to in vivo experiments on termites, the toxin effect of Plu0840 is comparatively weaker than Plu1537, which is consistent with the research before.

In conclusion, we have successfully cloned and expressed the Plu0840 toxic protein in E.coli BL21(DE3). The Plu0840 is weakly toxic to termites.

In 2009 research Cloning and expression analysis of a predicted toxin gene from Photorhabdus sp. HB78, plu0840 fused with GST is expressed in E.coli BL21(DE3). Engineered strain BL21 was both orally fed and injected in hemocoel to two kind of moths (S. litura and S.exigua)(1).

According to the result, on the one hand, oral feeding effectively inhibits the growth of larva while Plu0840 has only weak oral toxic effect. On the other hand, hemocoel injection showed negative results.

The research mentions that Plu0840 (Figure 1) shares 55% sequence identity with an enterotoxin Ast from aeromonas hydrophila. Aaeromonas hydrophila, which is connected with gastroenteritis, may lead to altered fluid secretion in mouse. According to a 2002 research, enterotoxin Ast makes weak contributions to fluid secretion compared with two proteins produced by other genes (2) However, judging that TT01 is nontoxic to animals at all, we think Plu0840 may share little similarity with Ast. 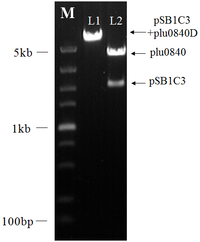 5-μl samples of the single (L1) and double enzyme (L2) digestion products for plu0840-device were loaded onto a 1% BioRad Ready Agarose Mini Gel, then subjected to AGE. See protocol http://2015.igem.org/Team:ZJU-China/Project/Protocol for AGE parameters. We use PstI for single digestion, XbaI and PstI for double digestion, then products were determined by AGE analysis. The DNA size standards were the DL5,000 DNA Marker (M2; TaKaRa, Cat#3428A). Bands were visualized with a Shanghai Peiqing JS-380A Fluorescence Imager.

It can be clearly seen the plu0840 is constructed into the pSB1C3 backbone (Figure 2).

We have sequenced the parts with standard primers VF2 and VR. The sequence of the 3.9k part shows 100% agreement with the desired sequence. 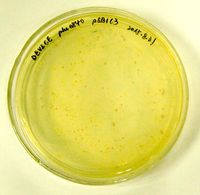 Figure 3 Expression of reporter mCherry in LB solid medium with arabinose and chloromycetin. 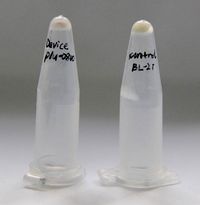 Figure 4 Expression of reporter mCherry in LB liqiud medium with arabinose and chloromycetin.

The solid or liquid culture medium is LB culture with 34ug/ml chloromycetin and 80mM arabinose.
Both the antibiotics and arabinose are added after the culture cools down to 60℃. 2%(w/v) of agar is added in solid medium.
It can be clearly seen that the recombinant turned red, indicating the expression of reporter mCherry(figure 4, 5). As mCherry is located behind target gene and shares a promoter with target gene, the target gene may be expressed to a great extent.

5ul sample is loaded in a 10% SDS-PAGE separation gel. We use 250kDa marker Precision Plus Protein? Dual Color Standards #161-0374. Parameters can be seen in protocols.

According to the result of SDS-PAGE (figure 5), target protein Plu0840 (72kDa) is strongly expressed (line 3) compared with the negative control, native BL21(DE3) strain without engineering (line 1).

In six days, three termites died in Plu0840-expressing group and two in CNCs group. We conclude that Plu0840 may have weak oral toxicity on termites, which also corresponds with results of related research. However, more experimental proof is needed to further confirm the toxicity of Plu0840.