A DNAzyme with peroxidase acivity1. It forms a G-quadruplex structure in which hemin can be incorporated. This enables it to catalyze the fission of hydrogen peroxide to water and a reactive oxygen species (ROS). Thus it can be used to catalyze chemiluminescence and a series of colorimetric reactions, known from the horseraddish peroxidase from Amoracia rusticana. This part can be joined to other functional DNA.

This part was used in different applications: http://2015.igem.org/Team:Heidelberg/Results/Standardization

The HRP DNAzyme's catalytic activity has been shown to be modulated by hemin concentration, where the optimum is achieved at equimolar concentrations. Further conditions for optimal activity are a pH of 8.5, no special metals are required. note that at non basic pH, and without further solvent or detergent (e.g Triton-X100), hemin will not dissolve in water, which will result in loss of activity. If the DNAzyme-hemin solution produces a brown-red precipitate, hemin is not dissolved and pH should be raised. Optimal concentration of DNAzyme for readout applications was determined to be 1 µM.

1. Determination of reaction quantity and reaction time of hydrogen peroxide in the system 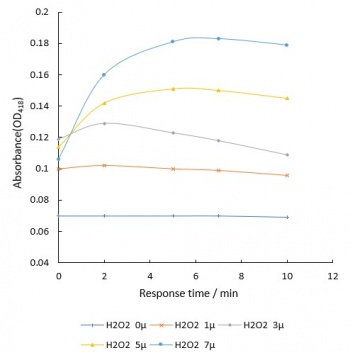 Figure 1. The absorbance of the reaction system for different amount of hydrogen peroxide in different time.

2. The activity of reaction for G4/Hemin mimic DNA enzyme turn to time

It can be seen that there is a peak value in the curve obtained (Figure 2). When 3ul 30% hydrogen peroxide is added in the pre-experiment, the peak value can be obtained to be 2-5min, so the results are consistent with the pre-experiment. Hemin itself has the catalytic effect of hydrogen peroxide, but when the G4 conjugated sequence is introduced and incubated for a period of time, the simulated enzyme formed by the combination of the two has higher enzyme activity and reaches the reaction peak at 2-5min. The results were used as a reference for the selection of reaction conditions. 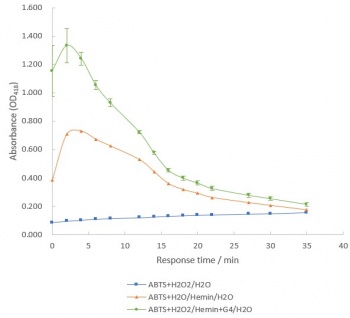 Figure 2. the relationship between time and the G4/Hemin DNAenzyme. Line green is the average of the four parallel experiments.

The optimal pH of this DNAzyme is 8.5 and its activity sharply decreases within the pH range of 8 to 6 (Figure 3)2. Therefore, this DNAzyme is not suited for use at low pH conditions. In certain applications, it may be preferred to use peroxidase-mimicking DNAzymes in low-pH conditions. For instance, iGEM team Leiden 2020 needed a low-pH oxidation buffer to decrease the power of a reducing agent that inhibited the GQ-catalyzed oxidation reaction. Li et al. (2016) showed for various peroxidase-mimicking DNAzymes that the addition of an adjacent adenine base at the DNAzyme’s 3’-end enhances its activity at pH 4 to 8 (Figure 3). Here, GEM Leiden 2020 demonstrated that this part (BBa_K1614007) showed no peroxidase-mimicking activity in a pH 6.0 phosphate buffer. However, upon adding an adjacent adenine at the 3’ terminus of its sequence, the peroxidase-mimicking activity was greatly enhanced at pH 6.0. The improved part was added to the Registry as new part BBa_K3343001. 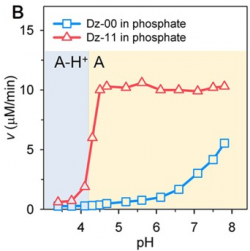 Results
The activities of the original DNAzyme (BBa_K1614007) and improved DNAzyme (BBa_K3343001) were monitored by measuring the absorbance at 650 nm over time. This is the first TMB oxidation product (Figure 4). A third DNAzyme (BBa_K3343000), was included as an extra control, as this is one of the DNAzyme with highest peroxidase-mimicking activity known in literature2. This DNAzyme has an intrinsic adenine at the 3’ terminus of its sequence. The three DNAzymes that were tested here can be found in Table 1. A blank with buffer in place of DNAzyme served as negative control. 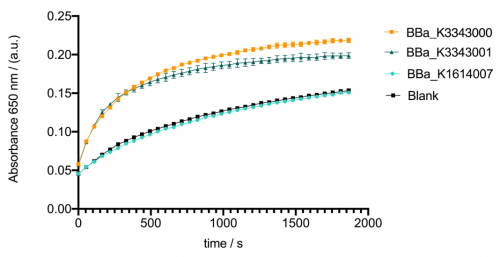 Conclusion
In conclusion, the additional adenine at the 3’ end of the DNAzyme greatly improved the DNAzyme peroxidase’s activity at pH 6.0. Without the modification, the older version of the DNAzyme (BBa_K1614007) could not show significant peroxidase activity. The modification that we included to create BBa_K3343001 thus allowed it to retain its catalytic ability at a lower pH range.