CIB1, a basic helix-loop-helix (bHLH) protein, would interact with cryptochrome 2 (CRY2), a blue light stimulated photoreceptor, when exposed to blue light. The CRY2/CIB1 interaction is entirely genetically encoded and does not require addition of any exogenous cofactors. These modules require no exogenous chromophore, are reversible within minutes, trigger protein translocation on a sub-second time scale, and even allow potential use in vivo in whole organisms.

In this work, we aim to develop a light inducible CRISPR/Cas9-mediated gene activation system in prokaryotic and lower eukaryotic cells, to precisely manipulate target gene activation upon the light induction. We fused two light-activated plant proteins, CRY2 or CIB1, to a transcriptional activator VP64 or the catalytic domain deleted tCas9, generating CRY2-VP64 or tCas9-CIB1 chimeric constructs. In the presence of a specific sgRNA guide, the tCas9 domain from the tCas9-CIB1 binds to the promoter sequence of a reporter gene. Once exposing to blue light, the CRY2 domain from the CRY2-VP64 can form a protein complex with tCas9-CIB1, which in turn brings the VP64 domain to the chromatin and activates the reporter gene. We have successfully generated a prokaryotic cell strain that the activation of reporter gene is regulated by blue light.

Application of the part

This fusion protein is for use in a yeast-two-hybrid system, and a Gal4 DNA activating domain fused to N terminus of CIB1. To regulate DNA transcription by blue light, the system is based on a two-hybrid interaction in which a light-mediated protein interaction brings together two halves (a binding domain and an activation domain) of a split transcription factor. If we remove the stimulation of blue light, dark reversion of CRY2 will dissociate the interaction with CIB1 and halt Gal4-dependent transcription, as figure1 shows.

Before the circuit was determined, there were two kinds of light control system for choice: the CRY2-CIB1 system and the PhyA-FHL system. To find out the system that fits our circuit better, we simulated both of them with the DDEs model. 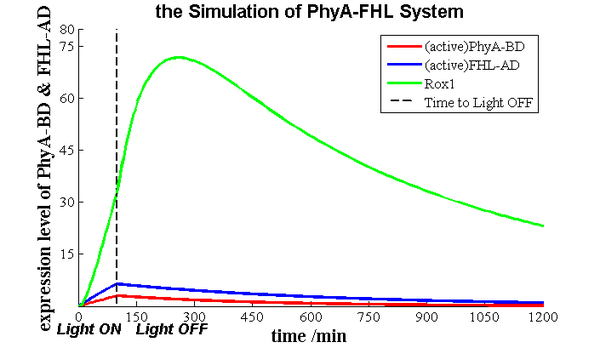 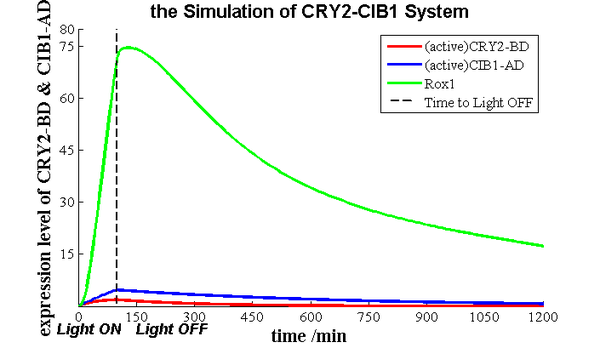 2. The peak of CRY2-CIB1 system appears earlier than the one of PhyA-FHL system.

3. The value of Rox1 in CRY2-CIB1 system decreases faster than the one in PhyA-FHL system.

We can safely derive the following conclusions from the figures above.

1. The photoactive subjects are of low concentration but they remain at a certain level.

3. The rate of Rox1 degradation in CRY2-CIB1 system is higher than the one in PhyA-FHL system, which means the darkness induction could shut down quickly so that the downstream systems could be activated.

Hence, we considered CRY2-CIB1 system more advantageous and applied it to our project.

From addgene, we received a plasmid pRMH120 that containing both Gal4BD-CRY2 and Gal4AD-CIB1 fusions on a p414TEF backbone. These two fusions are under the control of constitutive promoter PTEF1 and PADH1 respectively. Since promoter PGal1 and downstream gene β-galactosidase exists in yeast Y187 originally, we can validate the light-control system by testing the activity of β-galactosidase. Thus, we use Saccharomyces cerevisiae Y187 as chassis to test the light-control system. 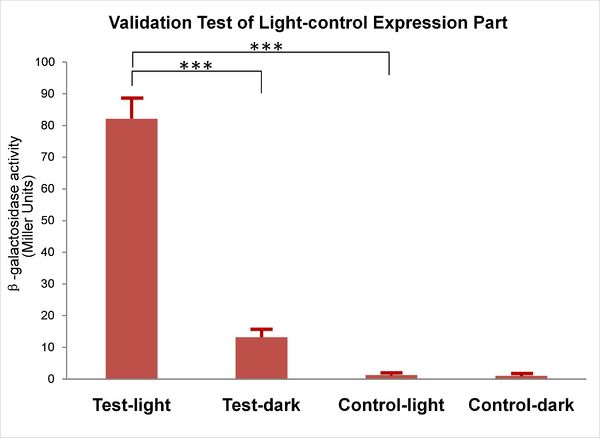 Experiments were carried out three times with similar results to show. We observed that pRMH120 transformed cells incubated in white light (18W) gave distinguishable activation from pRMH120 tansformed cells incubated in total darkness, which means that GalBD-CRY2 coupled well with GalAD-CIB1 for light-inducible protein expression. Considering AD and BD could bind randomly, the result that the strains with pRMH120 in darkness was also activated a bit than the control wildtype yeast is reasonable.