Summary:sJanus-linker-GCW61 is a construction we designed, which aims to change the hydrophobicity of the outer surface of the cell wall. GCW61 is an anchoring protein derived from Pichia GS115. When fused with a certain protein on its C-terminus, such as sJanus, this protein can be displayed on to the cell wall. Thus, sJanus, a class II hydrophobin, can eventually manage to increase the hydrophobicity of the cell wall, having displayed on cell surface, and ultimately help in targeting hydrophobic substrates when the host cell is a whole cell biocatalyst. Another usage of this construct is to protect the host cell from severe or extreme environments, since hydrophobins are considered to be very stable and protective.
We co-displayed PETase-linker-GCW21/51/61 along with sJanus-linker-GCW61, in attempt to make our whole cell biocatalyst more efficient and tolerant. Previous studies on co-displaying hydrophobin with lipases have already shown positive results on the promotion of efficiency. It is confirmed that most lipases are more active when entering a more hydrophobic environment. Since PETase is also classified as lipase, we decided to build this construction and make this attempt.

Figure 1. The activity of the first group of ppic9-PETase-linker-GCW51 & ppiczaA-sJanus-linker-GCW61 co-display transformants in different hours and amount of yeast.

Figure 2. The activity of the second group of ppic9-PETase-linker-GCW51 & ppiczaA-sJanus-linker-GCW61 co-display transformants in different hours and amount of yeast.

</html> Concluding, we successfully improved this part by constructing and characterizing a new BioBricks based on this part. More information on these parts can be found here: BBa_K1921025.

Janus is a kind of amphipathic protein which could self-assembly spontaneously. Due to its special properties, we could make many new applications. We use them as substrate to fix antibodies on a high-flux tumor detection chip. Meanwhile, they are used to catch cutinases for plastic degradation. We even make them into a fusion to test if the enhancement could be better. And we use its amphipathicity to achieve protein separation, where they act as a special purification tag, and the system could be as simple as polymer, detergent and water.

Janus could be produced by filamentous fungi, such as Ascomycetes and Basidiomycetes, and their scientific name is hydrophobin. Many different aspects of fungal development have been attributed to Janus. For example, they are thought to play a role in the formation of aerial hyphae and fruiting bodies. One of the most important features of Janus is that they are able to assemble spontaneously into amphipathic monolayers at hydrophobic–hydrophilic interfaces.


There are two classes of Janus, which are divided by the stability of their self-assembly. sJanus from Trichoderma reesei belongs to Class II. The assemblies of class II Janus can be dissolved in ethanol or sodium dodecyl sulfate or through the application of pressure or lowering of the temperature.

The bacteria ( E.coli BL21) were cultured in 5mL LB liquid in 37℃ for 6-8 hours. The antibiotic we used in inJanus-m and sJanus-m is kanamycin, and for sJanus is ampicillin. Then we used 500μM IPTG to induce in 37℃ for 4h. 
1. Mix the supernatant after centrifugation with the GST medium and incubate them in the shaker for 1~2h.
2. Add the intermixture to the column. Collect the flow-through and add it to the column again. (You can repeat the procedure for 2~3 times if necessary.)
3. Wash the column by 20ml 1xPBS for three times (more if necessary).
4. Add Prescission Protease to the column (the mass ratio of PP and your protein is 1:10). Then incubate them in the shaker overnight.
5. Collect the flow-through which is your sample. Purify your product by using UPLC.
6. Wash the column by GSH and recover the column. 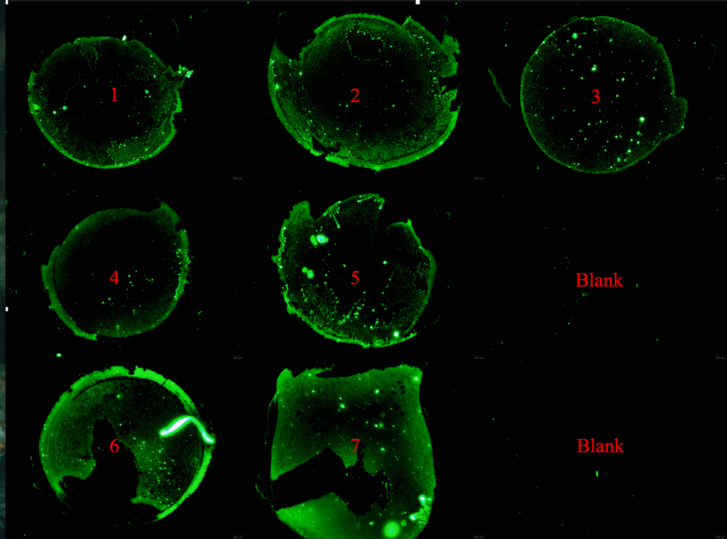 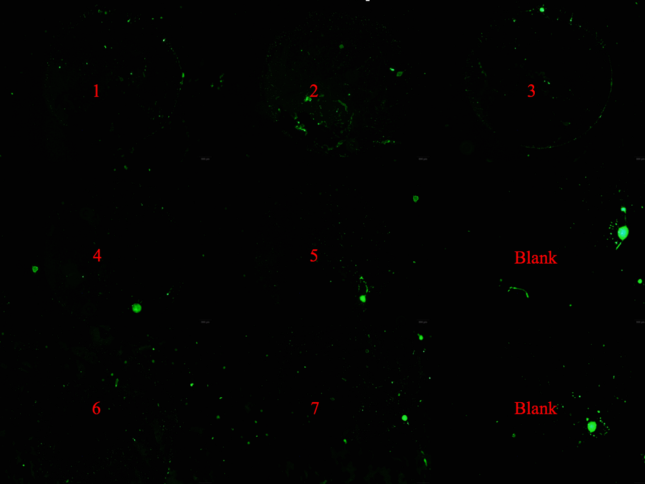 Project Achievements
1.We introduced a new method of protein chip substrate modification by using Janus, and verified its feasibility.
2.We confirmed the optimal concentration of antigens and antibodies in the detection of tumor markers, which helps to save materials to the most extent and keep the reliability of the results at the same time.
3.The experiments were conducted with different kinds of antigens and antibodies, ensuring the universality of the tumor detection chip under a certain range.

1.In the beginning, due to our inexperience, the concentration of antigens and antibodies was too high, which leads to excessive strong fluorescence signal intensity.
At first we thought it was caused by the improperly operation of microscope, but after literature reviewing and analyzing, we tried lowering the concentration about four times and achieved good results. 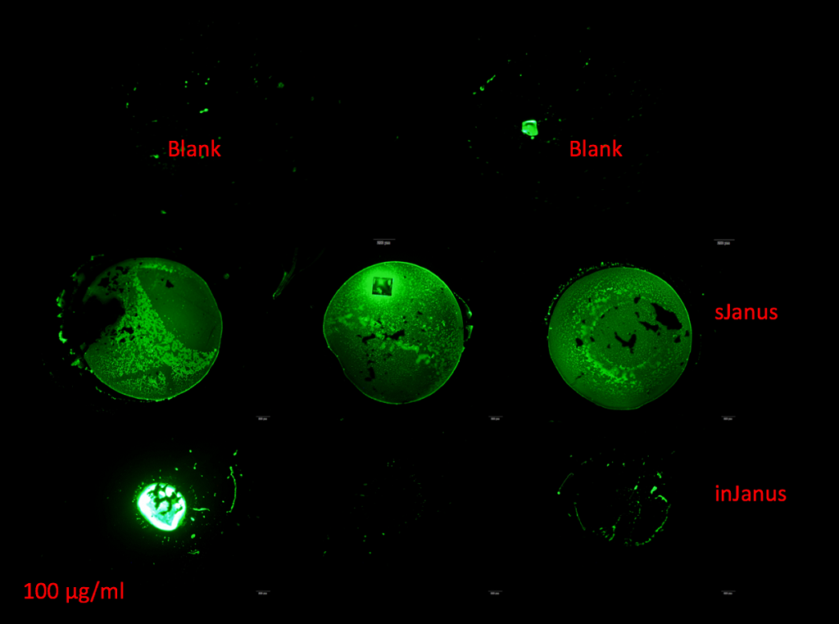 Figure 7.Good results were achieved after lowering the concentration.

To solve this problem, we consulted large quantities of data and information, and discovered a similar case arising when solutions of antibodies and antigens were stored for too long, leading to degeneration. So we reformulated all the solutions we need, and crystallization disappeared. From this we learned that reagents should be used right after they were ready. In this case, another possible cause was that we used TBST in the last washing step, which may also lead to crystallization. In the upper course of experiments we used water instead of TBST. 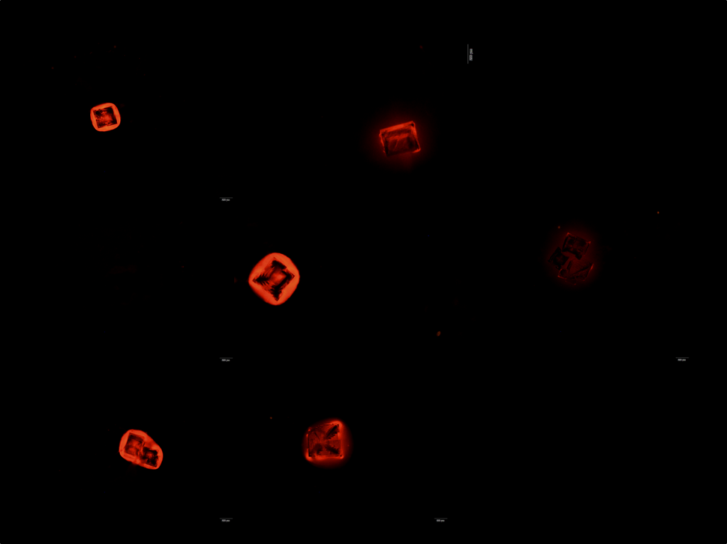 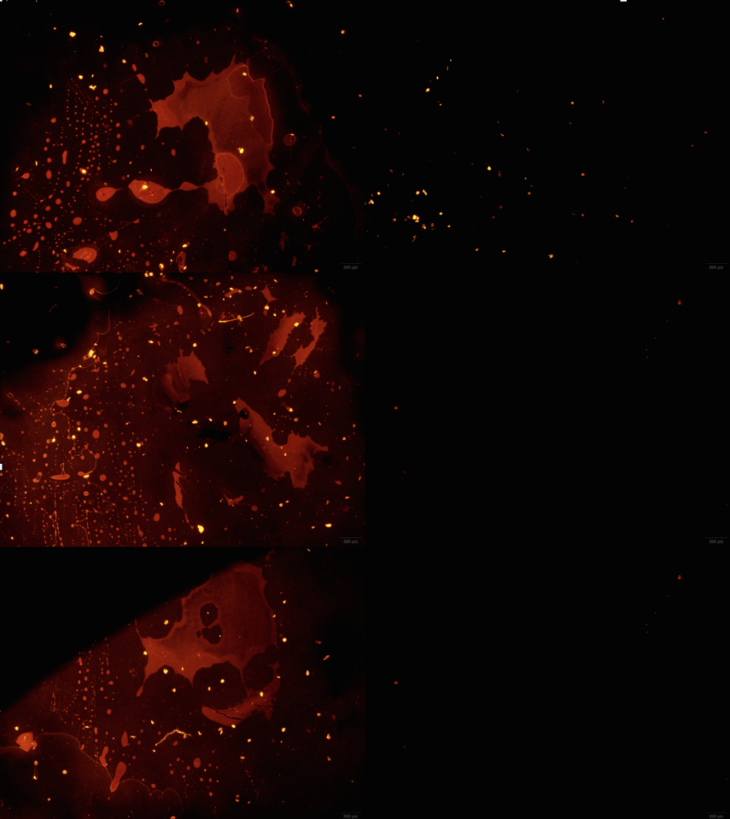 Figure 9.Crystallized structures disappeared after reformulating all the solutions we need.

We have found out appropriate concentration of the cutinase we made and suitable pH for our enzyme Thc-Cut1, the right time to detect the product of hydrolysis of PET.

We use absorbance in 600 nm to measure the turbidity of the liquid in tube. We tried different concentration of enzyme with one piece of plastic, decided to use 2mg/ml to conduct our experiment afterwards. 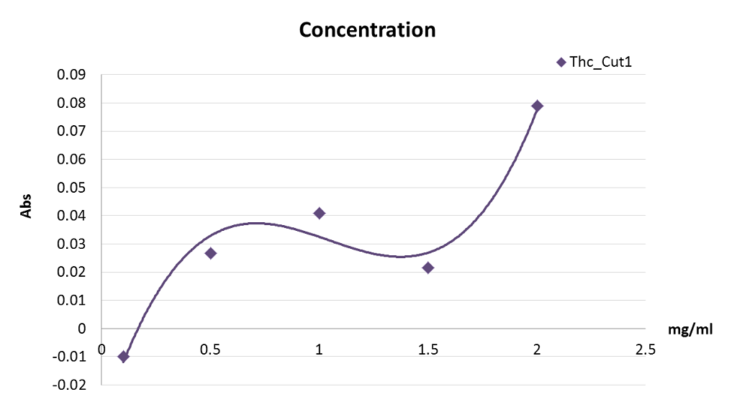 Figure 8. This curve describe the OD600nm after 3h’s reaction changes through the concentration of Thc_Cut1. We can see clearly at 2mg/ml, the curve reaches a peak, at which concentration we will compare the hydrolysis effect.

We also conducted our system in various pH, found that the activity of Thc_Cut1 doesn’t change much in different pH, so we chose pH 7.0 as one of our experimental condition.

Figure 9. The curve shows the absorbance at 600nm changes along with pH. The activity of enzyme doesn’t change much in various pH.

In order to find right time to detect, we detect OD600nm in several time, here’s the time line. 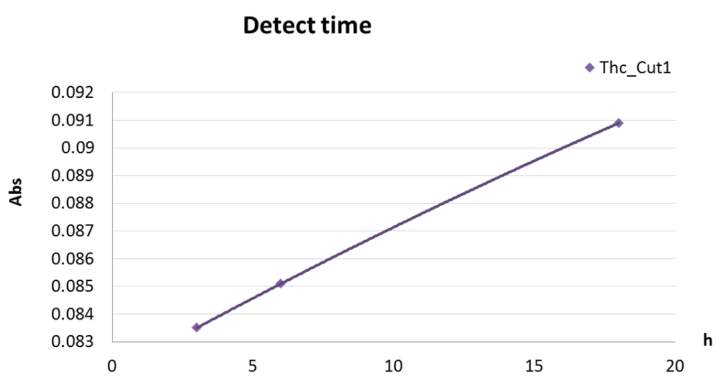 We discovered the right temperature to conduct various way to mix up our sJanus (or inJanus) and Thc_Cut1.And we have found out the best way to increase the hydrolysis rate.

We conduct our trail in different temperature ,realizing 50℃ is the proper temp for the enzyme and our Janus to combine. 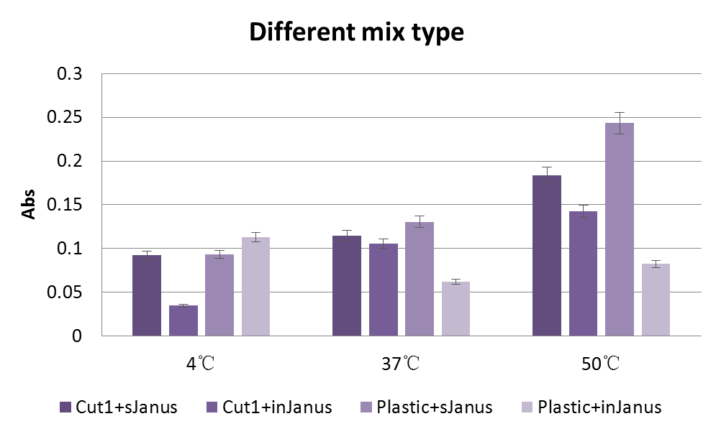 Figure 11 Different color represent different ways of mix. Thc_Cut1+Janus means enzyme had incubated with Janus for 16h before the plastic was added into the system. And Plastic+Janus means plastic had incubated with Janus before adding enzyme. And we also conduct these incubation separately in 4℃,37℃.50℃, values at 50 degree are higher than that under the other temperature.

Based on the experiment above, we compared these two different ways with simple mix, here’s the result. 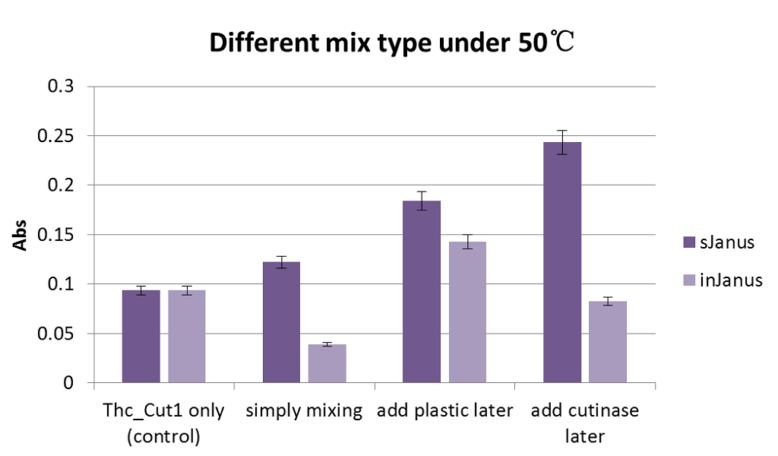 Figure 12. The tag with “*” means simple mixture. We can conclude that pre-incubation does increase the hydrolysis rate, some ways(Plastic+sJanus) even boost 200%+ react rate comparing with Thc_cutL1* in our conditions!! Another interesting phenomenon is sJanus usually works better than inJanus, and the reason behind it need our further exploration. On the whole, Our Janus works a lot!