In order to check that we had the protein expressed in its full length, we did a coomassie stain on a SDS-PAGE. Here we also wanted to receive information on the expression of the protein at different growth stages of E. coli. We analyzed samples from early exponential phase (OD600=0.3), late exponential phase (OD600=1.5), stationary phase (OD=2.5) and an overnight culture. As a control, E. coli with an empty vector (PSC1C3) was used. 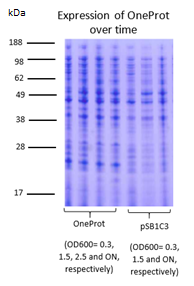 OneProt has a molecular weight of approximately 53.7 kDa. Unfortunately, there is no clear bond at this length. However, there is a bond at approximately 25 kDa, which is not detected in the control. We cannot conclude what gives rise to the band, but it might be a cellular response to an unfolded protein.

By comparing the growth curve of E. coli K12 expressing OneProt, TetR(+LVA) and TetR(no LVA) it is seen that the growth-rate of E. coli expressing TetR is lowered compared to the other strains, which means that it might be difficult to have OneProt expressed in high amounts controlled by pTet (+/-LVA), with the TetR repressors overexpressed at present levels. Loweing the levels of TetR would probably alleviate the attenuated growth-rate. 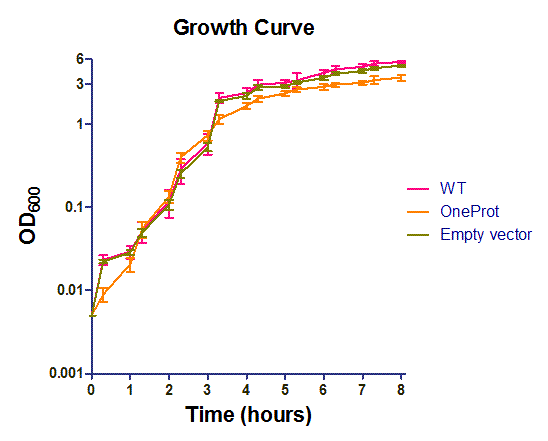 Growth curve illustrating the growth of E. coli K12 MG1655 WT, E. coli K12 expressing OneProt in pSB1C3 and with an empty vector pSB1C3.
Because OneProt is self-designed, we wanted to test if the protein has any toxicity. To do so, we fed Caenorhabditis elegans (C. elegans) with E. coli K12 MG1655 containing an empty vector and a vector expressing OneProt on separate plates. On both plates, 20 C. elegans were tested. Articles recommend using heat shock assay for 7 hours: 1 hour at 35° C followed by 1 hour at 22°C, repeated. [1][2]

After approximately 5 hours no effect on C. elegans was detectable. Therefore we decided to stress C. elegans a little more, incubating them in 2 hours at 35°C followed by 1 hour at 22°C, repeated. After 7 hours, every C. elegansboth plates were alive. Thus we conclude that the strain expressing OneProt at present levels doesn't display toxic effects on C. elegans. This suggest that there are no obvious toxic effects towards eukaryotic cells such as human cells. However, the results are far from conclusive, and extensive testing is necessary to confirm this suggestion. 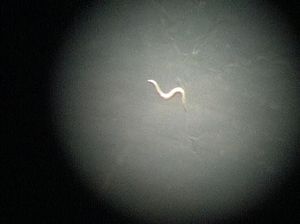