Recombinase Switch With GFP and RFP

A recombinase switch with GFP one side of the switch and RFP on the other.
PhiC31 integrase flips the orientation of the DNA between attP and attB, changing the direction of the promoter, switching rfp off and gfp on. 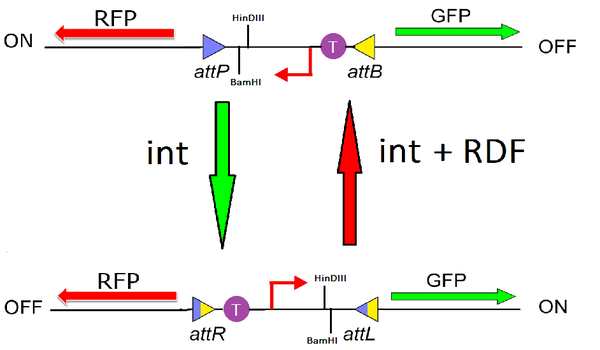 Recombination was tested in vivo by placing BBa_K1463000 on a low copy number pSC101 plasmid and introducing a second plasmid (pBAD-int) that only expresses integrase when arabinose is added. 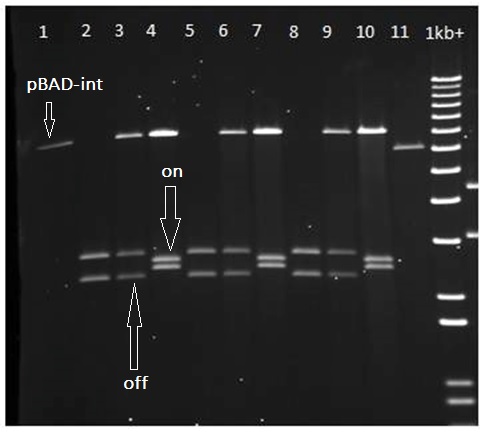 The BamHI sites are placed in such a way that the bands produced by digestion with this restriction enzyme change depending on whether recombination has occurred or not. This pattern can be seen on the gel above.

Sizes of fragments using BamHI are:

As can be seen, the restriction pattern changes from RFP ON to GFP ON only when arabinose is added.

Fig. 3: Fluorescence scan showing RFP and GFP fluorescence when BBa_K1463000 recombination switch is grown in vivo with pBAD-int with glucose or arabinose. 200 ul samples of overnight cultures in a 96 well plate scanned using a Typhoon FLA9500 scanner. Overlay of red and green fluorescent images using 532 nm laser and LPG filter and 473 laser and BPB filter respectively. Samples in the middle two rows are duplicate samples of cells corresponding to lanes 3, 4, 6, 7, 9, 10, 2, 5, 8 and 11 in the gel in Fig 2 above. That is the first 6 wells from left to right contain the switch plus pBAD-int treated alternatively with glucose and arabinose, followed by three wells with just switch plasmid on its own (unswitched RFP ON), and a negative control with no RFP or GFP genes.

There is a corresponding switch from red fluorescence to green fluorescence as the orientation of the promoter segment changes under the influence of integrase (Fig. 3).