The M13 origin of replication is a non-coding sequence that facilitates the uptake of a plasmid as a single-stranded phagemid into the M13 or Fd phage. It does not code for phage coat proteins; therefore cannot produce phage on its own.

The cas9 construct from Streptococcus pyogenes consists of the native trcrRNA and promoter region upstream of the type II cas9 endonuclease. Downstream of the Cas9 protein is a minimal CRISPR array that includes two CRISPR repeats flanking a spacer region. It is this spacer region that determines what DNA sequence is targeted by the Cas9 endonuclease. The spacer sequence can be easily replaced through a digestion-ligation reaction using BsaI.

This composite part was packaged into M13 phage using the M13K07 helper phagemid. Conjugated BW23115 E. coli were infected with the progeny phage and plated onto LB agar plates containing chloramphenicol to select for infected cells. 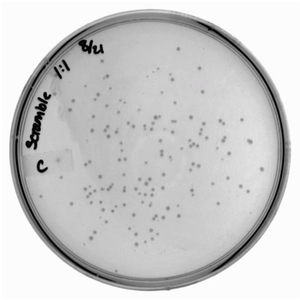 The addition of the M13 origin of replication allows for successful delivery of the Cas9 machinery to conjugated cells via recombinant M13 phage as demonstrated by the presence of colonies in Figure 1.