the part is a conjunction of part2 and part3.

This is a component of our whole project, cannot perform complex logic calculation individually. The whole project we carried out is to construct a circuit capable of performing multiple parallel logic calculation. There are 3 reporter gene in the complete project, response to 3 permutations of two input signals -- Tet & TM. We designed two different models based on two distinct enzymatic activity of Cre recombinase, namely sequence excision activity and sequence inversion activity. We mainly focus on constructing “excision-model”, through divide this model into three tandem parts and constructed them separately. This is the combination of the second part and the third part, contains two reporter gene and three types of regulatory units --- pTRE, ribozyme and Tet-inducible shRNA.

TM is a drug that can activate CreER fusion recombinase which can recognize loxP site and modify DNA sequence directly. When two loxP sites point the same direction, Cre recombinase will execute excision activity by removing the sequence between two loxP. Based on that, we designed the excision model as shown below.

This model response to 3 different input states of 2 input drugs, Tet & TM. In this model, CFP, RFP, YFP will express and only express in high-[Tet]-low-[TM], low-[Tet]-high-[TM], high-[Tet]-high-[TM] conditions correspondingly.

Role of this Part

This is the combination of the second and the third part, ranging from pTRE promoter to the end. pTRE is the promoter derived from ordinary Tet-on system, enable the expression of its downstream gene when Tet (or Dox) is added. CMV promoter expresses its downstream RFP reporter constitutively in an anti-sense direction, as well as the ribozyme constructed in the 3’UTR of its reporter gene. Tet (or Dox) also induce shRNA expression through assemble Pol III in modified H1T0 promoter to set up transcription, followed by knocking down RFP reporter. Although many regulatory units are present in this combination of the second and the third parts, it is still unable to perform more complex logic calculation without the first part. There is only one loxP site in this construct, unable to perform excision by Cre recombinase. We have tested the self-cleavage of ribozyme, the Cre-executed excision, the inducible expression of pTRE promoter and shRNA separately, and the only thing remain is to construct the first part successfully and connect it to the second and the third parts in correct order.

This is testing result of ribozyme. In control group, we use plasmid contain mCherry alone to transfected HEK293T cell, and added a ribozyme at its 3’UTR region. Although the control group doesn’t emit much light itself, but the fact that the testing group report nearly no fluoresce signal is still a very astonishing result. This experiment demonstrates that the self-cleavage efficiency of this ribozyme is very high. This ribozyme is derived from 3’UTR region of mouse CLEC2 gene, published in Nature 2008. According to the original paper, wild type ribozyme has a 241bp insert sequence between two functional arms, after delete this stuffer, the its efficiency boosts many folds. The ribozyme we use here is also the one without insert sequence. This unexpected result of our experiment proved the high efficiency of this regulatory unit once again. 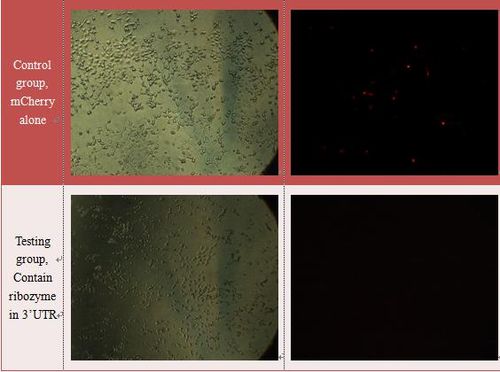 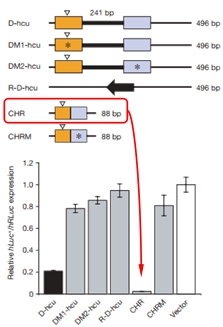