This part is an element of the Team Heidelberg 2014 intein toolbox and can be used as described in RFC[105]. The purpose of this tool is to provide an easy way to circularize any linear protein. While conserving the functionality of their linear counterpart, circular proteins can be superior in terms of thermostability [1][2][3], resistance against chemical denaturation [4] and protection from exopeptidases [2][4]. Moreover, a circular backbone can improve in vivo stability of therapeutical proteins and peptides [5]. 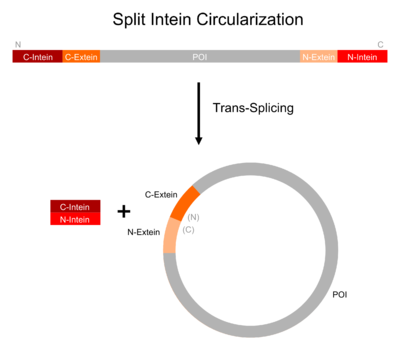 A well-reseached method to circularize large proteins is based on artificially split inteins. Inteins are integrated as extraneous polypeptide sequences into ordinary proteins. They do not contribute to the original protein function but perform an autocatalytic splicing reaction after protein translation. Analogous to intron splicing on RNA level, this post translational modification was named intein splicing. The protein segments were called intein for internal protein sequence, and extein for external protein sequence, with upstream and downstram exteins termed N-exteins and C-exteins, respectively. Inteins excise themselves out of the host protein while reconnecting the remaining N and C exteins, via a new peptide bond [6]. Some inteins like Npu DnaE are naturally split in two fragments, which can reassemble to to the active intein and thus ligate the exteins [7]. This process is called trans-splicing. If corresponding split inteins are added to both termini of a protein as illustrated in figure 2, the trans-splicing reaction results in a circular backbone.

Figure 3: How to design primers for an insert to be cloned into this part. It is more complicated for longer linkers.

Exteins, RFC[105] standard overhangs and BsaI sites have to be added to the coding sequence of the protein to be circularized without start- and stop codons by PCR. By Golden Gate assembly, the mRFP selection marker has to be replaced with the protein insert. Figure 3 explains how the insert should be designed. After addition of an inducible promotor the circular protein is ready to be expressed. For detailed step-by-step instructions and a strategy to clone long linkers please use our Toolbox Guide.

Interestingly, the circular xylanase appears to have a lower molecular weight (at ~18kDa) on the gel than their linear counterparts (at ~20kDa) although they include six amino acids of exteins not present in the linear forms. This observation can be explained by the different migration properties of linear and circular molecules during gel electrophoresis. Similar to circular plasmids which migrate faster than their respective linearized versions in agarose gels, circularized proteins such as GFP move faster than their linear counterparts [4]. This is a strong indication that our xylanase was in fact successfully circularized. In the case of lambda lysozyme, two constructs with the same amino acid sequence including a his6 tag were expressed and analysed by a western blot. In all dilutions of the BBa_K1362000 based construct, two bands are visible. One of them has the same moleclar weight as the linear control, while a second band is below. In our interpretation as explained above, the band below is circular lambda lysozyme. The low effieciency of circularization can be explained by a too short linker. With longer linkers, we achieved complete circularization for lambda lysozyme as well.

Summary: We changed a little bit in the intein linker sequence to optimize and stabilize the circulation of our TAL-effector.

the documentation of your improvement (text, graphs, pictures, tables, etc.) Include sections for purpose, results, methods, etc. (if applicable)