Not Released
Sample In stock
RFC: 23
Experience: Works
Not Used
Get This Part

Ag43+FLAG+MCS under the control of pBAD promoter

We describe the creation of Biobrick constrct Bba_K1352001 which expresses autotransporter Ag43 with an inserted FLAG epitope tag at codon 148, flanked by multiple cloning restriction sites. We describe the design and construction of the new Biobrick, and its verification using restriction digestion and DNA sequencing. We show using Western blot analysis that the BioBrick is successfully able to direct the expression of an 116.77 kDa FLAG-tagged protein. We also show using fluorescently-tagged antibodies that this Biobrick is able to direct the E.coli surface expression of FLAG-tagged Ag43. Finally we show that insertion of a FLAG-tag at amino acid 148 prevents the auto-aggregation capability of Ag43, creating a useful reagent that can be used for E. coli surface display.

Antigen 43 (sometimes called Ag43 or fluffing protein) is a phase-variable outer membrane protein encoded by flu gene. It is native to E.coli K12 strain and is usually expressed at about 50, 000 copies/cell. Ag34 precursor is 1039 amino acids long and subsequently becomes cleaved into alpha and beta chains (499 and 488 amino acids long respectively). The beta subunit forms a β-barrel pore via which alpha-subunit translocates to the cell surface, and with which it remains non-covalently joined. The surface alpha chain can be released by a brief heat treatment at approx. 60oC. Ag43 is an autotransporter protein, therefore it possesses all information necessary for translocation to the cell surface in its coding sequence. Ag43 mediates autoaggregation, via a velcro-like mechanism (Heras et. al., 2014), and plays a role in E.coli biofilm formation. Interestingly, the alpha subunit is able to express foreign peptide sequences on E.coli cell surface if inserted just in front of codon 148 (Kjærgaard et. al., 2002). 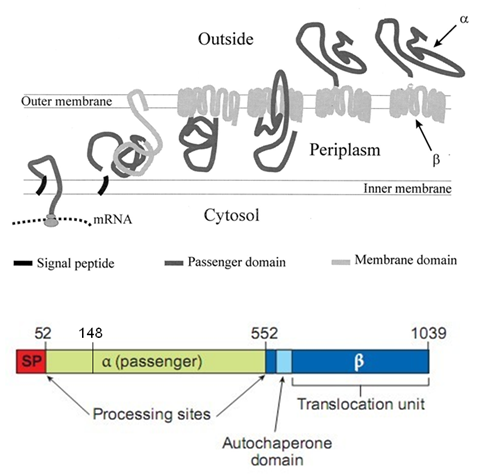 
BioBrick Bba_K1352001 is a modified version of the Bba_K1352000 BioBrick. It is composed of an Ag43 coding sequence with an in-frame FLAG epitope tag flanked by BglII and HindIII multiple cloning sites inserted within the alpha-subunit in front of codon 148 of Ag43. Expression of Ag43 is under the control of the pBAD promoter; it includes a ribosome binding site as well as two transcriptional terminators. Structure of the BioBrick was designed to allow easy insertion of foreign protein sequences of choice at codon 148 with a simple restriction digest with BglII and HindIII followed by ligation. Potential uses of this BioBrick include surface display of foreign peptide sequences, E.coli aggregation tests as well as synthetic vaccines production.


Depending on the length, desired foreign peptide sequence can be purchased as oligos or a synthetic piece of DNA. In order to keep the foreign protein sequence in-frame, a following template should be used:


4.       Making of the Biobrick and plasmid modularization


Bba_K1352000 BioBrick was a starting material for this construct. FLAG tag flanked by BglII and HindIII MCS was inserted into Ag43 at codon 148 via an In-Fusion reaction (Clonetech). For a more detailed description of the construction of this BioBrick, please see: http://2014.igem.org/Team:Aberdeen_Scotland/Parts 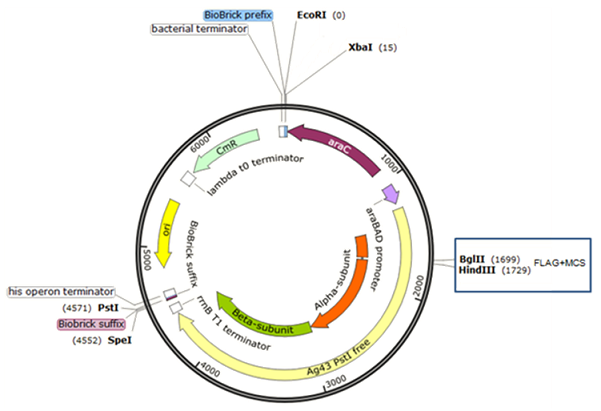 a) Restriction digest with prefix and suffix enzymes

Single and double restriction digests were carried out in order to ensure that created BioBrick behaves as expected and yields desired band pattern. Single digests with EcoRI, XbaI, SpeI and PstI cause a single cut within the vector and therefore result in plasmid linearization. As expected, in all cases a single band at 6.6 kB position is visible, which corresponds to the full size of a vector. EcoRI+PstI and XbaI+SpeI result in the release of a BioBrick construct from a vector yielding two fragments (BioBrick fragment: 4580 bp and vector fragment: 2020 bp). Single cuts with BglII and HindIII aim to test insertion of FLAG flanked by multiple cloning sites; single digests result in construct linearization. Double digests with BglII+SpeI and HindIII+XbaI were carried out in order to provide more information whether FLAG+MCS construct was inserted at an expected site.

Fig. 3  Restriction digest of created BioBrick with a range of restriction enzymes.

The obtained bands correspond with expected pattern therefore we can assume that FLAG+MCS was inserted at or in proximity to codon 148.

Our Ag43+FLAG+MCS was sequenced by the DNA Sequencing & Services Unit, Dundee University. Sequencing primers spaced approximately every 600 bp were used to ensure good coverage. Fragments were combined together using Clustal Omega and yield a high confidence reading along the entire sequence. It confirmed the presence of an in-frame FLAG tag sequence flanked by BglII and HindIII restriction sites at codon 148 of Ag43. Our construct sequence was identical to that of the protein product of Bba_K1352000, with the exception of the codon 148 FLAG + multiple cloning site sequence.

Western Blots were used to confirm the expression of FLAG tag. Anti-FLAG antibody conjugated to horse radish peroxidase was used.

Fig. 6  Western blot of a total cell lysate of an E. coli Bba_K1352001 transformant, run on a 12% SDS-PAGE gel,
blotted onto membrane and probed with an anti-FLAG antibody.

Two prominent bands are present which roughly correspond to the expected sizes of 116.77 kDa and 56.7 kDa. The additional faint band most likely corresponds to a protein degradation product. Overall, the Western blot results confirmed expression of FLAG tagged protein of the sizes expected from Ag43.

In order to investigate membrane localisation and accessibility for antibody binding, fluorescent immunolabelling and confocal microscopy were used.

Cover slips were coated with 0.01% Poly-L-lysine to which cells expressing a construct were adhered. The cells were fixed using 4% paraformaldehyde for 30 minutes, without creating pores in their membrane. They were exposed to a monoclonal anti-FLAG mouse primary antibody, then an Alexxa633 fluorophore-conjugated Goat anti-mouse secondary antibody. Cells expressing the Ag43-FLAG construct were visualised at up to 100x magnification with a Cy5 (red) filter on an upright confocal microscope, this was contrasted against visual identification with brightfield. Unmodified Bba_K1352000 which does not express a FLAG-tagged Ag43 was used as a negative control. 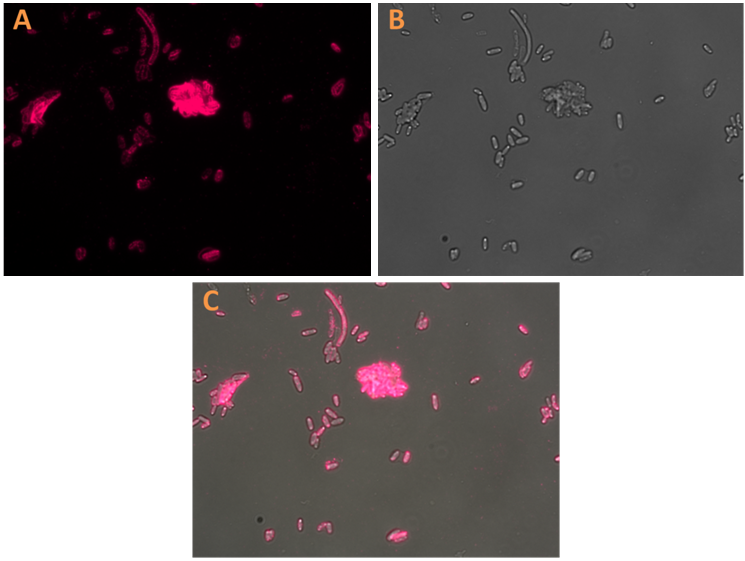 Fig. 8  Results of the immunolabelling of created construct. A) red filter, B) brightfield, C) composite image.

A strong fluorescent response was evident as a ring shape around bacteria expressing the Ag43-FLAG tagged construct, indicating successful expression of a FLAG-tagged protein external to the membrane; red fluorescence was not observed in the cytoplasm. As expected, the negative control, expressing un-modified Ag43, did not display characteristic fluorescence pattern. Immunolabelling results let us conclude that FLAG expression is localized on the outer membrane and is accessible to anti-FLAG antibody.

We observed that created Ag43+FLAG+MCS construct does not aggregate in overnight cultures in contrast to the original Ag43 BioBrick (Bba_K1352000). To investigate further, overnight cultures of Ag43+FLAG+MCS and Ag43 were transferred onto sterile glass test tubes, induced with 0.2% arabinose and incubated in a shaking water bath at 37oC for >2hrs. Subsequently, test tubes were removed from the water bath and photographed for visual investigation for aggregation. 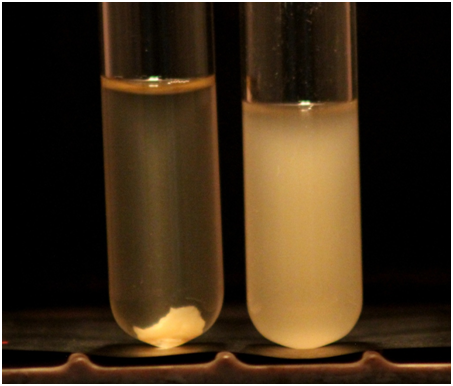 A clear difference is visible between aggregation of two BioBricks. It seems that insertion of a FLAG tag flanked by MCS into alpha subunit of Ag43 disrupts the velcro-like mechanism of aggregation.