This part generates the TaZ receptor. The TaZ is under a Pcat constitutive promoter. TaZ is a fused Tar-EnvZ receptor meant for Aspartate dependent response, by activating the EnvZ/OmpR two component signalling system and thus activating the PompC promoter. We used this part for prove-of-concept for low concentration detection. By using this TaZ Generator we were able to test different concentrations of Aspartate and their effect on the PompC promoter present in another plasmid.

Two isogenic strains of E. coli K-12, BW25113 (parent strain for the Keio collection) and JW3367-3 (with ΔEnvZ mutation) were transformed with pSB1AK3 carrying our Taz construct (BBa_K1343016) and pSB1C3 carrying the BBa_M30011 reporter. The bacteria were cultured in growth media containing varying concentrations of L-aspartic acid. After two hours of growth the relative RFP fluorescence of the cultures was determined (fluorescence/OD). 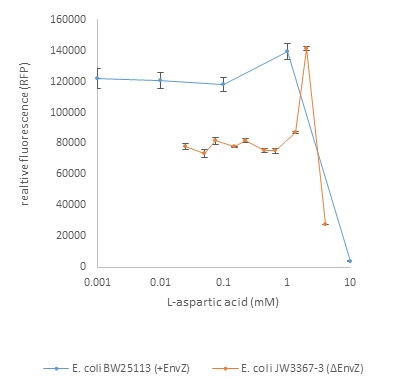 Figure 1 shows that at low concentrations of L-aspartatic acid (below 1mM), there is a steady, constant expression of the reporter in both the wild type and the mutant strain. The relative fluorescence observed by the mutant strain (ΔEnvZ) is lower than that of the parent strain. This is because the natural histidine kinase protein which detects a high level of osmolarity in the cells environment (EnvZ) is present in the wild type. This contributes to phosphorylation of the ompR. The low level of fluorescence observed in the mutant strain could be due to another mechanism (such as an acetyl phosphate dependent mechanism) which phosphorylates the ompR, leading to activation of the PompC promoter.

In the mutant strain, the relative fluorescence increases 202% in comparison to the basal level. This occurs over a narrow concentration range, which reflects the sensitivity of the two-component signaling system.