Not Released
Sample It's complicated
Experience: Works
1 Uses
1 Twin
Get This Part

This part codes for LuxR under the Plac promoter. IPTG can induce the promoter to create the LuxR protein. LuxR can then form a complex with AHL and activate the Plux promoter.

In a characterization experiment, varying concentrations of 3o6c-AHL (3-oxohexanoyl-homoserine lactone) was added to a culture of E. coli K-12 Top 10 containing two different plasmids: pSB1C3-Plac-LuxR and pSB1A2-Plux-GFP. By adding the inducer IPTG to the bacteria LuxR was formed and addition of AHL to the bacteria enabled the complex LuxR-AHL to form. Binding of the complex activated the Plux promoter and GFP was expressed. There was a rise in the GFP fluorescence according to the rise in AHL concentrations until 0.1 µM AHL. At higher concentrations of AHL, saturation in the GFP expression was seen. 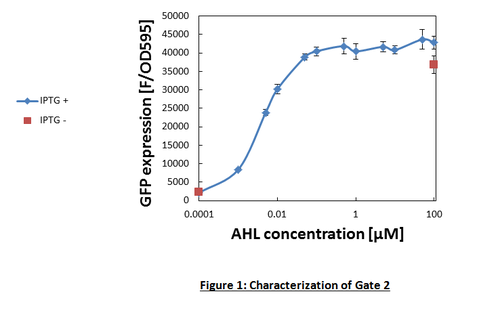