This part contains the coding sequence, previously codon-optimised for expression in Escherichia coli, of the Cellulose Synthesis elements AcsC and AcsD. In Gluconacetobacter xylinus, the Acs cellulose synthesis operon is a functional unit that codes for four essential elements for cellulose assembly and release into the extracellular space. Even though the functions of AcsC and AcsD are still not very well understood and very little is known about the assembly, localisation and activity of this biosynthetic process, these proteins are required for optimal production yields. AcsC is believed to code for an oligomeric protein that becomes embedded in the extracellular membrane for further pore formation and subsequent release of the growing polymer into the extracellular space. On the other hand, AcsD improves yields by optimising crystallisation, but the function and localisation of this element have not yet been fully determined.

BBa_K1321335 was digested with XbaI and PstI and cloned into a medium-to-low copy number plasmid (pSB3K3) containing the inducible pLAC promoter. The resulting construct, verified by GreenTaq Colony PCR, was subsequently sub-cloned into BBa_K1321336-containing electrocompetent cells. These were plated on LB Agar+Chloramphenicol plates, then incubated overnight at 37 degrees. 50 mL Falcon tubes containing 5 ml LB supplied with 50 ug/ml Chloramphenicol were inoculated with a selection of freshly grown colonies for further restriction analysis and gene sequencing verification. 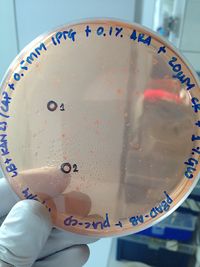 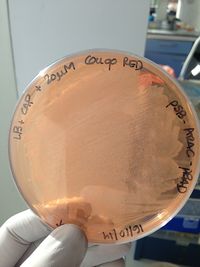 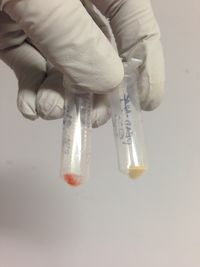 BBa_K1321336 was characterised in conjunction to an additional pLAC-inducible expression system containing AcsC and AcsD (optimised coding sequences submitted as Part BBa_K1321335) cloned into a medium-to-low copy number plasmid, pSB3K3. The functions of AcsC and AcsD are yet not very well known but are believed to play a crucial role in cellulose crystallisation and secretion into the extracellular space. Cellulose production was assayed by plating transformed cells on Congo Red assay plates containing 20uM CR, 0.5mM IPTG, 0.1% Arabinose, 1% Glucose, 25ug/ml Chloramphenicol and 25ug/ml Kanamycin. Cellulose-producing E.coli colonies turned red in the presence of CR.