The BioBrick information has been updated by SCU-China 2016

This part is a hemoglobin isolated from Vitreoscilla (VHb) expressed behind a strong Anderson promoter and a strong RBS. VHb is a monomeric heme-containing protein that appears to improve the metabolic function of obligate aerobes and facultative anaerobes in low-oxygen conditions[1][2][3][4]. Evidence suggests that the protein binds oxygen, then shuttles it to at least one cytochrome in the electron transport chain[5], improving the rate of oxidative phosphorylation and therefore ATP production even when dissolved oxygen is scarce, resulting in increased cell metabolism. This part contains a constitute promoter and RBS ready for expression.

[1] http://www.ncbi.nlm.nih.gov/pubmed/2850971 - Cloning, characterisation and expression of the hemoglobin gene from Vitreoscilla in Escherichia coli.

[3] http://onlinelibrary.wiley.com/doi/10.1021/bp960071v/full - Expression of Vitreoscilla hemoglobin is superior to horse heart myoglobin or yeast flavohemoglobin for enhancing Escherichia coli growth in a microaerobic bioreactor.

[4] http://www.nature.com/nbt/journal/v11/n8/full/nbt0893-926.html - The production of cephalosporin C by Aecremonium chrysogenum is improved by the intracellular expression of bacterial hemoglobin.

Sep. 2016, Characterization Updated by SCU-China 2016. The formation of mRFP needs oxygen molecule. So the fluoresence result remains considerations. But the OD600 data is reliable.

In iGEM14_Imperial project, VHb is used in Gluconacetobacter xylinus strain to promote the production of cellulose. SCU-China 2016 are expected to express this gene in E. coli to promote the engineered bacteria growth ability in relatively bad condition (Shoes, for example). Except observational measurement, we did the quantitative measurement in different oxygen concentrations to test its ability.

In observational measurement, we use two E. coli BL21 strains which contain mRFP (BBa_J04450) and mRFP + VHb (K1919500) respectively to compare their growth and mRFP production by naked eyes. The result obviously shows that the colony is bigger and contains more mRFP. 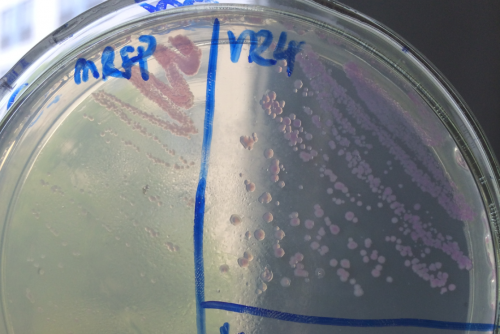 In quantitative measurement, we use different oxygen concentrations (created by gas production pack) to test if VHb can really work. Because the synthesis of VHb cost energy. But if the volume of energy cost is lower than what VHb can bring, as a result, VHb makes the strain grow slower. We think oxygen concentration is an important factor. And we raise a theory called “VHb energy cost theory” in our modeling part. The result is shown in the part information page below, please visit our wiki for details http://2016.igem.org/Team:SCU-China/Model.

As the quantitative measurement results shown as follows, we conclude that in restricted environment, VHb can accelerate the growth and in early stage and it can improve the production protein. But all improvement occurs only when oxygen supply is efficient. For more details and analysis, please visit the wiki of SCU-China 2016 http://2016.igem.org/Team:SCU-China/Description. 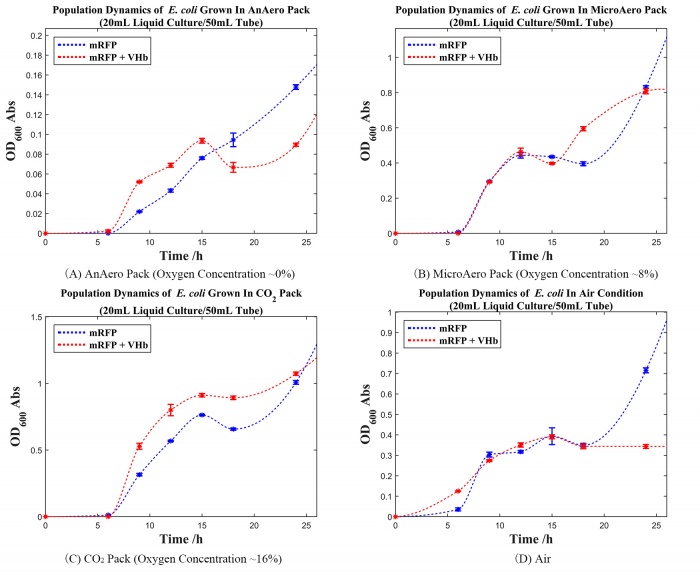 Figure 2a. OD600 test shows in 20ml/50ml in different oxygen growth condition, the tendency is similar. It may be due to the high volume liquid culture in tubes and E. coli process anaerobic respiration. 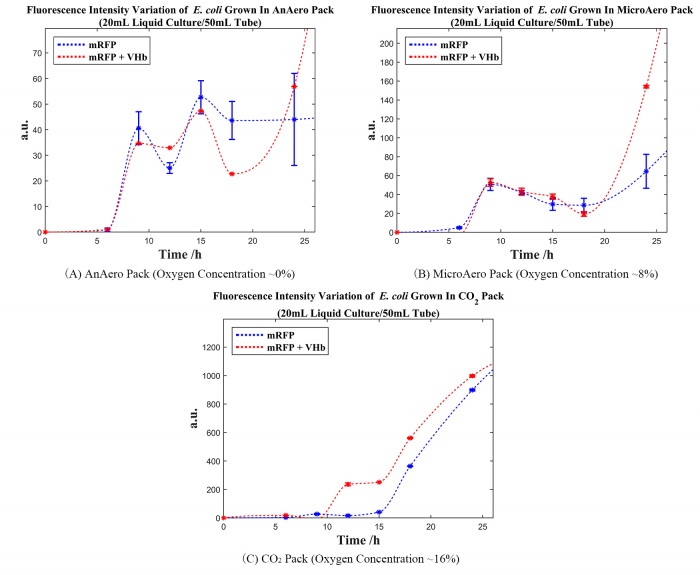 Figure 2b. Fluorescence result shows the opposite tendency to Figure 2a. VHb + mRFP fluorescence is higher in later stage. 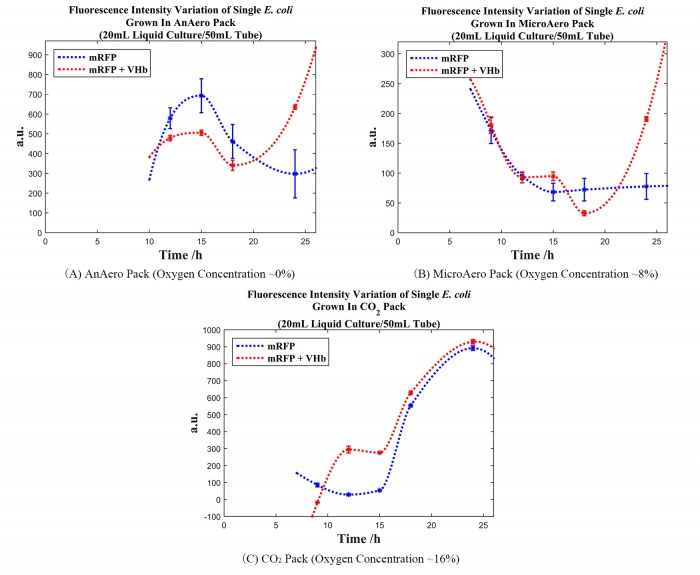 Figure 2b. Figure 2c. OD600/fluorescence result shows the same tendency as Figure 2b. Early data can be ignored because of the OD value in early stage. The results do show that single bacteria synthesizes more protein even in relatively anaerobic respiration condition. 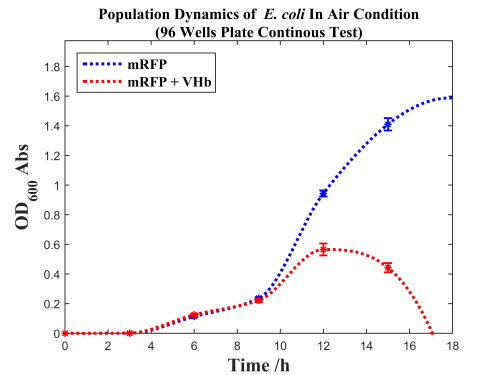 Figure 3a. OD600 continuous test in 96 wells plate in air shows the similar result to 20ml/50ml test. It may be still due to the anaerobic respiration. 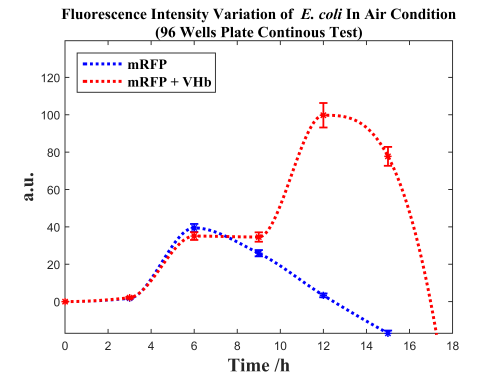 Figure 3b. Fluorescence result shows the same tendency as Figure 2b. 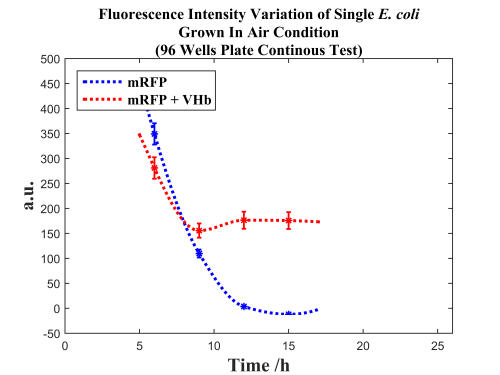 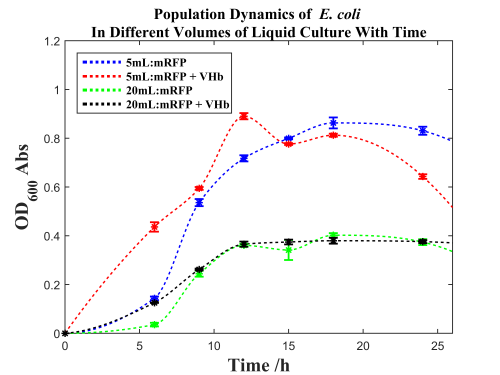 Figure 4a. 5ml/50ml and 20ml/50ml cultivated in air OD600 test shows VHb does accelerate the growth of E. coli in early time for small volume cultivation. But at the end, because of the energy cost on VHb, strain containing mRFP + VHb has lower carrying capacity K. 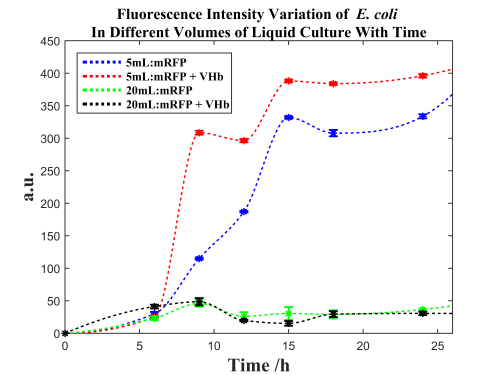 Figure 4b. Fluorescence result shows the same tendency as Figure 2b. But the fluorescence is higher in 5ml system. 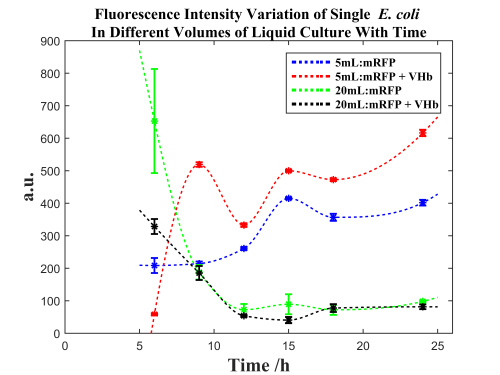 Figure 4c. OD600/fluorescence results shows the opposite tendency to Figure 4b. Early stage can be ignored. 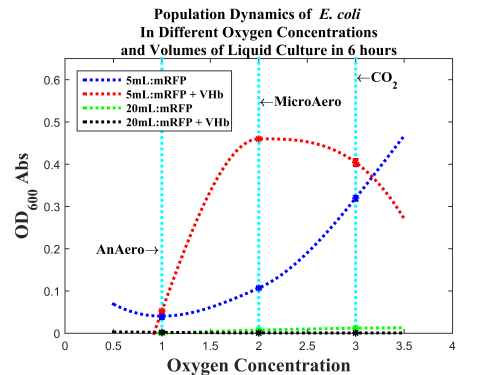 Figure 5a. 5ml/50ml cultivated in different oxygen concentrations at 6h OD600 test shows VHb does accelerate the growth of E. coli. And the curve is matching with our VHb energy cost theory. 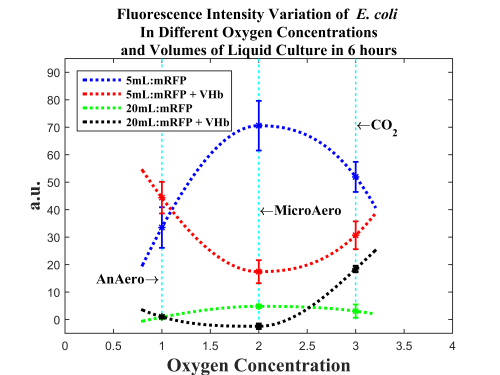 Figure 5b. Fluorescence result shows the opposite tendency as Figure 5a. 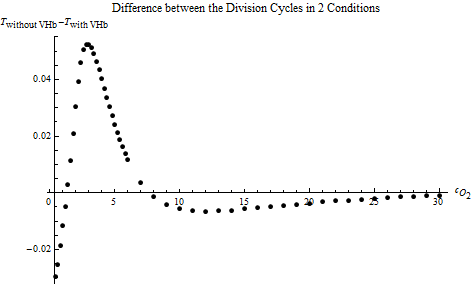 Figure 6. Modeling result for VHb protein function. The figure refers to the division of cell division cycle time of E. coli with VHb and E. coli without VHb. In low oxygen concentration, VHb strain processes anaerobic respiration and it only costs energy and brings nothing. VHb drags the E. coli growth and the division is negative number. As the oxygen concentration raises up, the VHb strain starts aerobic respiration and it utilizes oxygen better than strain without VHb. Division is positive number. When oxygen supply is totally content, the energy cost on synthesis VHb is less than what VHb can bring. The division is negative number. The result fits our experiment data and reference.

Our project aimed to use Vitreoscilla hemoglobin (VHb) to improve the oxygen usage of the engineering bacteria, so we considered this part to get the VHb gene. However, when making alignment we found that the sequence of VHb in BBa_K1321200 was different from the original VHb both in DNA and protein. (data source: NCBI)

So we wondered which VHb could affect the growth of bacteria on a higher level. We constructed BBa_K2833022 and BBa_K2833023 with different promoters as shown in figure 2.

We transformed these constructs to E.coli.(BL21) and measured their growth curve(figure 3). From the result we can see that all the three VHb transgene bacteria grew better than the wildtype bacteria, mainly presented on the maximal bio-mass at platform, while our newly built constructs(BBa_K2833022, BBa_K2833023) showed bigger effects on the growth of the bacteria. 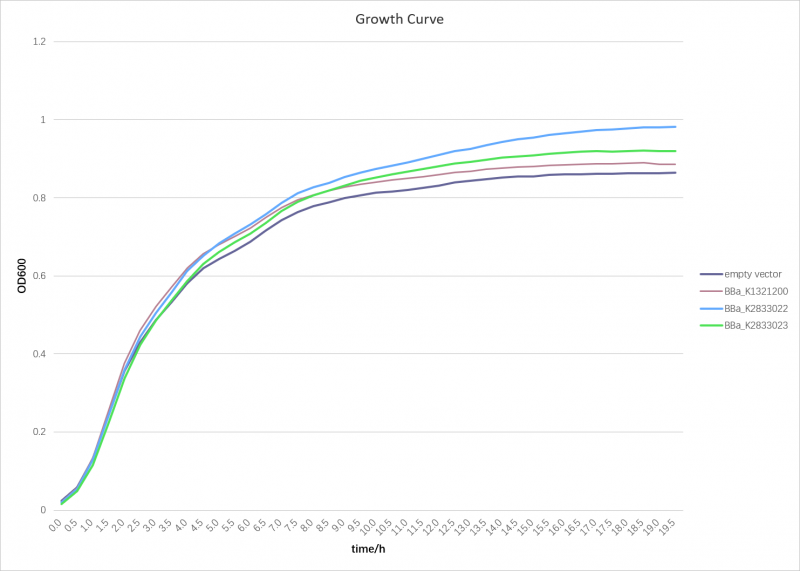 Figure 3.The growth curve of wildtype and VHb transgene bacteria

SHSU_China 2018 team intend to create a cellular hemoglobin (Hb) based oxygen carriers for future artificial blood design. To reach this goal, we firstly need to find Hb and then found proper carrier. We chose to use hemoglobin isolated from Vitreoscilla (VHb) as it's an ideal hp to start our project. We improved this part by creating a composite part CD63-Vhb Fusion Protein (BBa_K2794005), when this fuse genes been transfected into mammalian cells, the fusion protein will be transported to the endosome and then through inward budding and exocytosis be exported on the membrane of exosomes. In this way, Vhb located inside the exosome and it automatically transported into the exosomes.

The western blotting result of whole cell lysate showed successful transfection of PNV and PNCV plasmids in HEK 293T cells. Coomassie brilliant blue staining and western blotting result of exosome content showed successful result of fusion protein band around 40 kDa. TEM imaging result of sample showed that exogenous protein doesn’t effect the shape or the concentration of exosomes. COD result compared to normal exosomes showd that the fusion protein containing heme group that could increase the chemical demand of exosomes and thus proving the function of Vhb is not disturbed. Also, color difference can be seen between normal and fusion-protein containing exosomes. 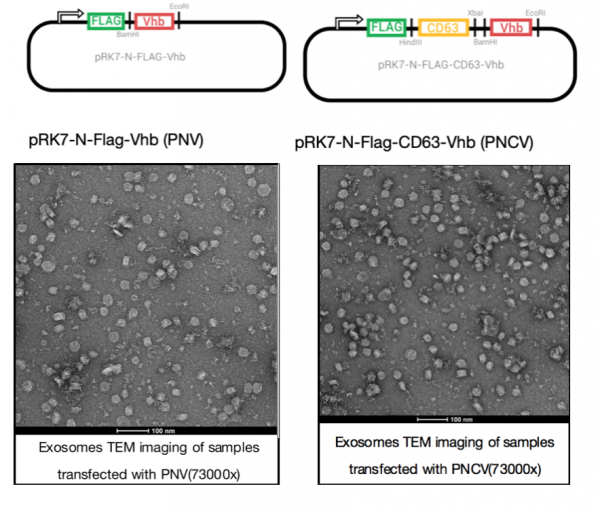 The part was linked with a periplasm-targeted signal peptide TorA to enhance its function of growth promotion. The new part is : BBa_K2717013(Group: iGEM18_BNU-China), Designed by: Chenyu Liu.

The part was linked with a membrane anchoring protein CD63 and when this fusion gene been transfected into cells, VHb could located inside the exosome and it automatically transported into the exosomes. The new part is : BBa_K2794005(Group: iGEM18 SHSU_China), Designed by: Luo Yan.