NhaS with an RFP reporter induced by an UV promoter. 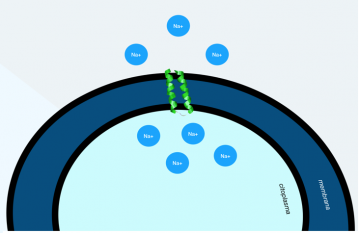 It produces a protein called NhaS BBa_K1255000 that is described as a sodium ion binding protein in Bacillus pseudofirmus . The RFP sequence has been added to inform its transcription with a red fluorescence indicator. This part was characterized in Escherichia coli to generate a sodium ion capture system from the medium in which it is found. Because this piece is optimized with a constitutive promoter, its performance was evaluated by its ability to capture sodium ions. Krulwich in 1994 mentions that NhaS could act as a channel of ions in the membrane that promotes the mechanism of antiportation (Image 1), introducing sodium ions so that the cell finds an equality between the osmotic pressures both inside and in the exterior. In this way the cell would be able to avoid its lysis by a difference in the salt concentrations present both inside and outside it.

In 2014, the CIDEB-UANL_Mexico high school synthesized the nhaS gene and introduced it into E. coli cells to test its resistance to saline environments. It was found that the transformed cells are capable of withstanding high concentrations of salinity in the medium in which they are found, since they managed to have a growth in media at concentrations of up to 15% NaCl. This resistance to saline environments and its hypothetical capacity of ion absorption given by the NhaS protein, will be used in this work as part of a biological desalination process together with a protein capable of fixing itself to silica surfaces, thus facilitating the recovery of cells that previously trapped sodium ions due to the expression of the NhaS protein and employ them as well as an organism with high resistant to salty media.

The function of the NhaS protein was evaluated by comparing salt consumption between the recombinant strain and a control without the gene, using electro conductivity as an indirect indicator of sodium ions dissolved in the culture medium. The statistical analysis of the results produced by the experiment showed statistically significant differences between the control and the samples. Since the difference between these groups is the presence of the nhas gene, from this you can consider this factor as the cause of increased consumption in the middle salt. Given the results, it is plausible to state that the nhaS gene allows greater absorption of sodium ions compared to those that lack it.

The data of the conductivity measurements observed in Figure 2 are subjected to a statistical analysis of a Student's t-test, where said test returned a p-value of 0.008 below the 0.05 alpha, so it can be said that the difference between the control and the samples can be considered statistically significant. Since the difference between these groups is the presence and absence of the nhaS gene, from this value this factor can be considered as the cause of the greater consumption in the salt of the medium, as predicted by Krulwich in 1994. In this way it can be concluded that the bacteria that contain the nhaS gene, achieved a significant reduction in the amount of sodium ions in the culture medium in the comparison of the bacteria that do. 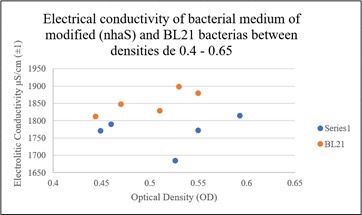 Another important aspect to consider is the difference in the growth of microorganisms, as can be seen in Figure 1, where the bacteria is shown without the gene reaching its logarithmic curve before the transformed bacteria, so the optical density is considered as an independent variable in the experiment. It is speculated that this behavior is due to the high metabolic demand that could mean having to produce two extra proteins in your system: NhaS and RFP (Huang, 2010).