Not Released
Sample Not in stock
Experience: Works
5 Uses
2 Twins
Get This Part

Regulatory region spanning 680 bp upstream of the start codon of the GPD1 gene in yeast.

Group: Tel-Hai 2017
Author: Yaakov Bulka
Summary: we added information about the promoter and on its mechanism.

This is a strong constitutive yeast expression promoter from glyceraldehyde 3-phosphage dehydrogenase. Also called TDH3 or GAPDH. Studies have found the promoter activity of TDH3 decreased significantly when glycerol or xylose was supplied as the carbon source and at high temperatures (42 °C) . Oxygen conditions had non-significant effect.

About the protein - the promoter was taken from the Glyceraldehyde-3-phosphate dehydrogenase peptide (GAPDH), that involves in glycolysis and gluconeogenesis. The protein is a tetramer that catalyzes the reaction of glyceraldehyde-3-phosphate to 1,3 bis-phosphoglycerate, detected in the cytoplasm and cell wall. GAPDH-derived antimicrobial peptides secreted by S. cerevisiae are active against a wide variety of wine-related yeasts and bacteria.

GFP is an important reporter gene used in our project. We integrated GFP gene into yeast’s chromosomes, and used it to represent the degradation of chromosomes. In order to verify whether the TDH3 promoter can express the GFP signal intensity required in experiment, we characterized the TDH3 promoter’s efficiency. We constructed a GFP fragment that was controlled by the TDH3 promoter and bound it to the chromosome genome of 4742 yeast. We measured the GFP expression levels of yeast at 15h, 20h,25h and 30h using microplate analyzer. Meanwhile, we used 4742 yeast (no GFP fragment) as control group. 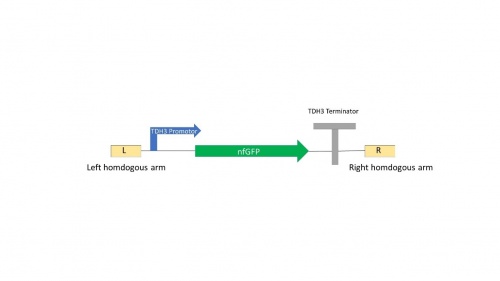 We use GFP as reporter gene to test the intensity of TDH3 promoter, and draw a bar chart with fluorescence intensity /OD as the ordinate and time as the abscissa. The excitation/emission wavelength of GFP in the microplate detector was set as 488/535nm.