this is the DNA coding sequence for the tRNA of pyrrolysine from the Archaea Methanosarcina barkeri str. Fusaro.

this tRNA is a part of the machinery that is used to incorporate pyrolysine into proteins in E.coli.

the tRNA synthetase that charges the tRNA with pyrrolysine can be found in biobrick BBa_k1223013.

the tRNA has the anticodon CUA - which means that the sense codon needed to incorporate pyrrolysine is TAG - the amber stop codon. 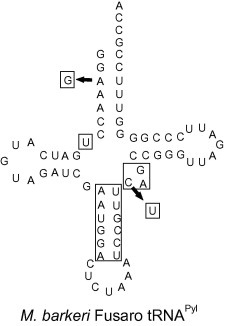 This biobrick is the DNA coding sequence for the tRNAcua pyl of Pyrolysine from the Archaea Methanosarcina barkeri str fusaro. This tRNA is a part of the machinery that is used to incorporate pyrolysine (and other substrates) into proteins in bacteria. The PylRS that charges the tRNA with pyrrolysine can be found in biobrick BBa_k1223013. The tRNA naturally contains the anticodon CUA (Fig.4) – Thus it recognizes TAG as its sense codon when incorporating the UAA. With the introduction of this tRNAcua pyl from archaea into bacteria it can compete with the bacterial release factors in the recognition of the UAG codon of the mRNA. This competition can manipulate the bacterial translational machinery (stop codon suppression) and thus render the TAG non-sense codon (Amber stop codon) to a Sense codon for UAA incorporation.

UAA incorporation efficiency: For efficient stop codon suppression the expression of tRNA¬cua¬pyl levels should be high. For this reason the pylT gene must be cloned (along with the PylRS) into a high copy number expression plasmid. In addition, multiple copies (6-9) of the gene encoding for the amber suppressor (tRNAcua pyl) can be added to the same backbone.[6]

this is a part of the pyrrolysine incorporation machinery.

this tRNA is charged by pyrrolysyl-tRNA synthetase (pylS gene) to incorporate the amino acid pyro lysine. the tRNA has CUA anticodon that recognizes the TAG (UAG) codon on the mRNA during the translation process. 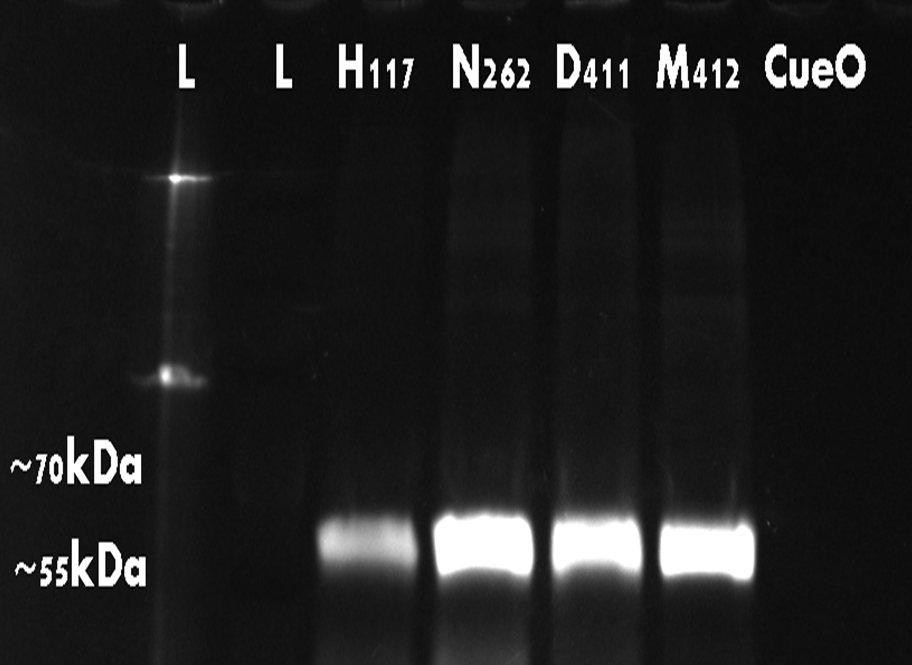 we used a reactive fluorescent dye to identify the incorporated UAA in the gel.

By the use of site specific incorporation of many different Unnatural amino acids into proteins numerous possibilities open up for synthetic biology and many other fields. Among those possibilities are:

1. Probes of Protein Structure and Function: Many biophysical and mechanistic studies require significant quantities of proteins with a probe incorporated at a unique site in a protein. UAA mutagenesis methodology is well suited to many such problems.[8]

2. Therapeutic proteins UAA mutagenesis is beginning to find many applications in the generation of therapeutic proteins, where the production of large quantities of homogenously modified protein is desired.[8]

3. Protein Evolution with an Expanded Genetic Code It is quite possible that the ability to encode additional amino acids with novel properties would be evolutionarily advantageous, especially since nature’s choice of 20 could have been arbitrarily fixed at the point of transition between communal and Darwinian evolution paradigms and subsequently sustained by the code’s inertia. Furthermore, in the limited scope of laboratory-directed evolution, which concerns only one or few specific functions over a short time rather than general organismal fitness over thousands or millions of years, one can easily envision a selective advantage conferred by additional amino acids. Because the templated assembly of polypeptides from mRNA on the ribosome establishes a direct link between genes (information) and proteins (phenotype), UAA mutagenesis methodology can easily be adapted to the evolution of proteins with novel or enhanced function.[8]