This part was designed to function as a biological timer for our P.A.S.E 1 system. It includes an assembly of two existing parts from the Registry, Lac/Ara-1 IPTG Inducible promoter (BBa_K354000) and LVA-tagged cI repressor protein (BBa_K327018). In order to extend the half life of the cI protein, we removed the LVA tail. The part was characterized through sequencing and restriction digest with PvuII and HindIII.

In addition, the promoter's performance under the presence of IPTG and Arabinose was analyzed via comassie staining. The cI protein is 29 KDa. the cI expession levels were dependent on the combination of inducers used to express the cI. this way we generated a 4-way switch to control the amount of protein the cell produces. 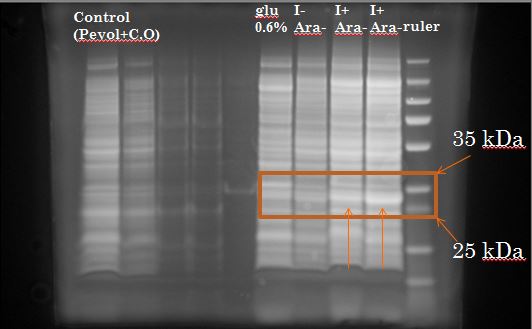