this cassette is the heart of the P.A.S.E. 2 (Programmable Autonomous Self Elimination) system. P.A.S.E. 2 cassette is intended to be incorporated into E.coli BL21 genome by recombineering, and therefore has a homolgy region in each side that direct the recombination into the right place in the genome. this cassette is used to replace the native promoter and regulatory sequences upstream of the CDS of the TyrS gene that encodes for the enzyme Tyrosine synthetase. the native promoter is replaced with an IPTG/Arabinose induced promoter (BBa_k354000) and BBa_b0034 RBS. the cassettes has a kanamycin resistance gene (KanR) to aid in selection of the desired transformants.

both the tRNA and the tRNA synthetase are encoded in the UAA incoporation machinery plasmid.

The part was characterized through sequencing and restriction digest with BamHI and XbaI.

The sixth amino acid in the TyrS sequence was replaced with an amber stop codon (TAG). The TAG stop codon is used for the incorporation of unnatural amino acids (UAAs) into the protein sequence. This system gives us better control of the translation process and prevents expression of TyrS when the unnatural amino acid is not present in the medium. The fail proof aspect of this system is achieved by creating a logic AND gate which is depended on IPTG/Arabinose AND UAA in order to synthesize an active TyrS protein. 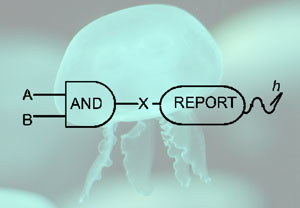 this construct was synthesized in one piece. the sources of the sequences used in this part are genbank (TyrS CDS, KanR) and the iGEM catalog (BBa_k354000,BBa_b0034).