Not Released
Sample It's complicated
Experience: Works
Not Used
3 Twins
Get This Part

The enzyme DhaA is of particular interest because it enables a very slow conversion of the toxic artificial compound and suspected human carcinogen 1,2,3-trichloropropane (TCP) to 2,3-dichloropropane-1-ol under laboratory conditions .And DhaA31 is a mutant of DhaA ,DhaA31 has large aromatic residues at two of the three randomized positions and at two positions modified by site-directed mutagenesis. These changes enhance activity towards TCP by decreasing the accessibility of the active site to water molecules, thus promoting the formation of an activated complex.

Haloalkane dehalogenase DhaA31 is a multi-site mutant of DhaA with a higher catalytic activity, which can degrade 1,2,3-trichloropropane (TCP) into 2,3-dichloropropane-1-ol (2,3-DCP). But there is no information about its characteristic. Therefore, this year we UESTC-China carried out a series exploration toward its characteristics to improve the information of this part.

From PDB database, we found that the Crystal structure of DhaA31 numbered as 3RK4. As an asymmetric monomer, The haloalkane dehalogenases contain two domains: a main α/β-hydrolase domain and an α-helical cap domain. Compared with Wild-type, DhaA31 contains five amino substitutions: 135F, C176Y, V245F, L246I and Y273F.The C176Y variation, locating in the cap domain, is suggested to modify the mouth of the main tunnel that connected the buried active site to the surrounding solvent. Due to the mutation of Y273F located in the active site, a hydrogen bond to the main-chain carbonyl O atom of Asn41 was lost. V245F is located in the main tunnel, I135F and L246I are located in the slot tunnel and the active site respectively [1]. 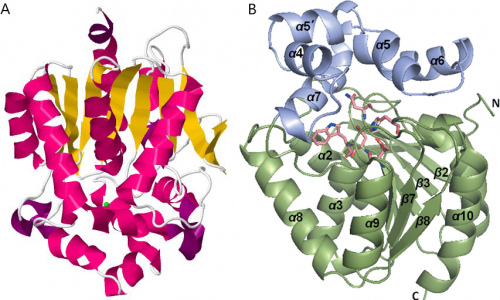 The dehalogenation reaction of the halohydrin dehalogenase involves nucleophilic attack of the carbon atoms of the halogenated substrate through its active site, resulting in the cleavage of the carbon-halogen bond, the substitution of the halide and the formation of the covalent alkyl intermediate. The alkyl-enzyme intermediates are subsequently hydrolyzed by the water molecules activated by a catalytic base[2].Compared with wild type，five mutant amino acids DhaA31 reduce the volume of the active-site cavity and its accessibility to water molecules and promote the formation of the activated complex[1].This may be a possible reason that DhaA31 owns higher activity than wild type. 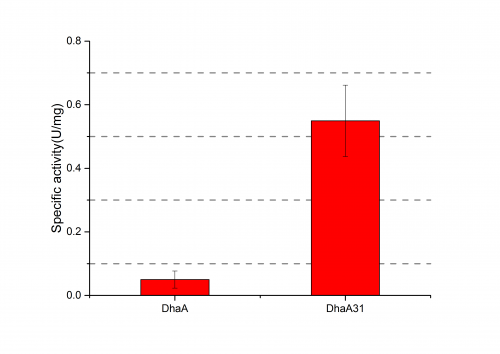 Effect of pH on DhaA31

In order to clarify the effect of pH on the DhaA31, we have explored the changes of activity in the range of pH5.8-9.2 by PB buffer and Tris-H2SO4 buffer. The results show that the activity of DhaA31 is better around pH 8 at 37 ℃. Under alkaline conditions, the activity of DhaA31 is stable, and under acid conditions, there is a large loss of activity. So this enzyme is more suitable for reaction in alkaline conditions. 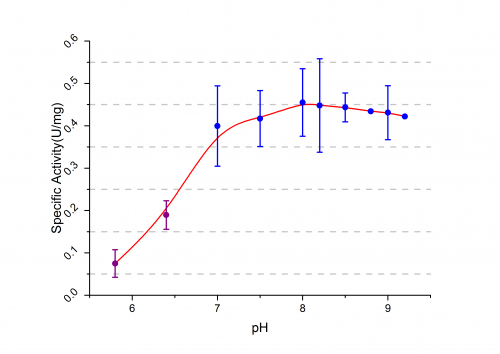 Effect of Temperature on DhaA31

In order to clarify the effect of temperature on the DhaA31, we tested the changes of activity in the range of 30℃-70℃ at the condition of pH8. The results showed that DhaA31 was able to maintain high activity in a large temperature range, especially from 35℃ to 55℃. 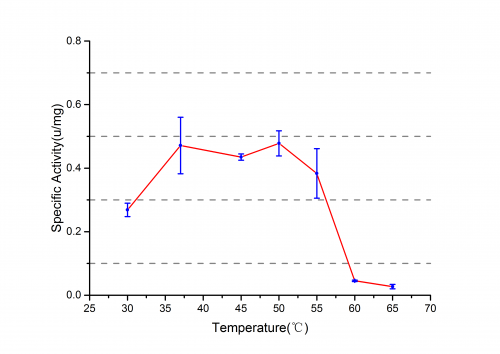 Fig. 4 Effect of temperature on DhaA31 activity.Data were measured in 50mM Tris-H2SO4 buffer at pH8.

Haloalkane dehalogenase, derived from Rhodococcus rhodochrous，is originally expressed in the prokaryotic nucleus. This year we carried out the codon-optimization for this sequence and transferred it into the tobacco to explore its potential for stable work in plants. After Obtaining transgenic positive plants, we first carried out reverse transcription test, and the results show that DhaA31 transcript can be stable in tobacco. Furthermore, we used tobacco leaves to extract crude enzyme solution for activity detection, and the results show that DhaA31 is able to work effectively in tobacco. 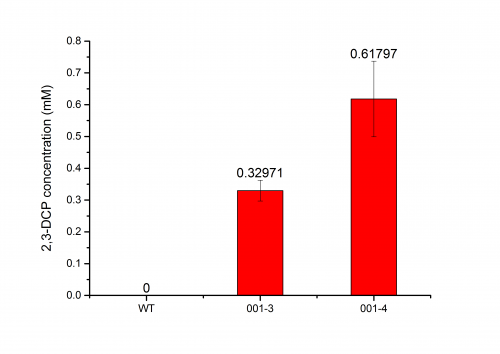 Fig. 6 The amount of 2,3-DCP generated within four hours.Enzymatic reaction in 200mM Trs-SO4 at pH 8.5 and 37℃. The data were measured by Gas chromatography.