Beta-lactamase (BLA) is an enzyme frequently present in plasmids for selection. Beta-lactamase is a 29-kDa monomeric enzyme. Its enzymatic activity provides resistance to beta-lactam antibiotics such as cephamysin, carbapenems and penicillium through hydrolysis of the β-lactam ring, a structure shared by these antibiotics (Qureshi, 2007). Kinetically, beta-lactamase is simple and shows high catalytic efficiency. Also, no orthologs of BLA are known to be encoded by eukaryotic cells and no toxicity was identified making this protein very useful in studies involved eukaryotes (Qureshi, 2007). BLA has also been used to track pathogens in infected murine models (Kong et al., 2010). However, in addition to its application in eukaryotic cells, beta-lactamase efficiently cleaves a wide variety of substrates but its versatility goes beyond that; BLA preserves its activity even when fused to heterologous protein (Moore et al., 1997). This feature, in particular, makes beta-lactamase a potential tool for assemble of synthetic constructs. This is submitted in the Freiburg fusion backbone for easy fusion construction. Additionally, the BsaI cut site in the gene has been mutagenized. 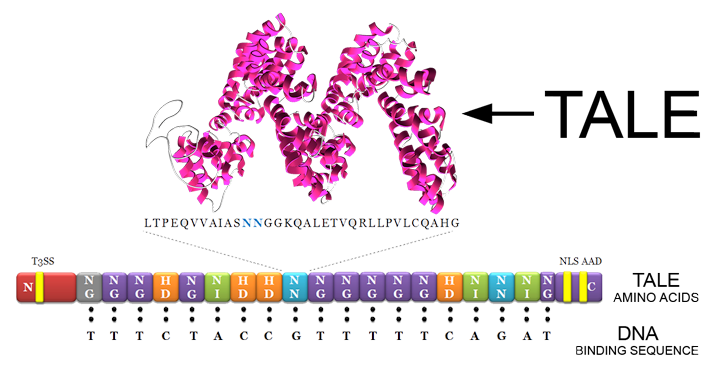 In order to demonstrate that we can successfully capture target DNA with two TALEs we did a capture TALE assay. TALE B was incubated with DNA containing target sites for TALE A and TALE B and blotted on nitrocellulose. After blocking and washing, TALE A β-lactamase fusion (BBa_K1189031) was added to the nitrocellulose strips. The strips were transferred into a 96 well plate to which a benzylpenicillin substrate solution with phenol red was added. If the TALE A β-lactamase fusion bound to the target site for TALE A then the solution will change colour from pink to clear. If TALE A β-lactamase fusion was not present, the solution will remain pink. We can show that the first four samples which have TALE B with DNA for TALE A and TALE B show a colour change indicating that we are successfully capturing the target DNA and reporting it. Furthermore we can also show that when we add non-specific DNA we do not see a colour change demonstrating that we can successfully capture only specific DNA and report its presence with an easy visual colourimetric output.

This assay shows that we can capture our target DNA with two detector TALEs with specificity . Additionally, we can report whether that DNA has been captured and is present in the sample, which is a very important concept for our sensor system.

To conclude, we have demonstrated that we can build, express, and purify this part. This biobrick has also been characterized to show both its ability to be a good reporter and its ability to be able to bind to DNA with specificity.