This BioBrick codes for a HBsu protein attached to a red fluorescent protein (RFP). HBsu is a non-specific DNA binding protein that binds to DNA as a homodimer. The HBsu is joined to the RFP through ten amino acid flexible linker sequence. This allows the observation of Bacillus subtilis DNA using fluorescence microscopy. The integration strategy that we opted for was to clone in the BioBrick into the Multiple cloning site of pMutin4 backbone. First we attached HindIII restriction sites on 5'end and SacII restriction sites on 3'end of the BioBrick. We then cut the pMutin4 backbone and BioBrick using the previously mentioned restriction enzymes, this allowed us to ligate the plasmid and BioBrick together. We also attached a ~300bp amyE homology region onto the 3'end of the BioBrick after the SacII to allow the single cross over and integration of the whole plasmid into the genome. The pMutin4 plasmid contains a ery+ resistance marker for B.subtilis and amp+ for E.coli and also contains lacI, lacZ and Pspac promoter which is an IPTG induced promoter which regulated the transcription of this BioBrick. An alternative method to use this part would be to clone this BioBrick out and use any Assembly protocol to attach a desired promoter, RBS and antibiotic resistance genes.


In order to make sure that the BioBrick had been integrated properly into the endogenous amyE region, the transformants were plated out onto a starch plate. As the BioBrick integrated into the amyE region, the cells were unable to produce amylase and as a consequence were unable to digest starch. Thus when iodine was applied to these plates there were no zones of clearance of starch around the cells (Figure 2). As can be seen in Figure 2, neither B. subtilis with the HBsu-sfGFP nor the HBsu-RFP constructs demonstrated any zone of clearance around the colonies in comparison to wild type B. subtilis str.168 and B. subtilis BSB1. The results of this iodine test further confirm that the colonies seen on Plate 1 of Figure 1 are indeed transformants of the synthetic construct.

B.subtilis transformed with the HBsu-RFP BioBrick were shown to produce a red fluorescence under UV light at the wavelength typical of RFP (Figure 3). To determine whether the fusion protein encoded for by the BioBrick is binding to DNA we used DAPI to stain the genome of B. subtilis which were transformed with the BioBrick. DAPI binds to DNA and emits a blue fluorescence at 465nm. As can be seen in Figure 3, the localisation of the DAPI coinsides with the red fluorescence emitted by HBsu-RFP at 610nm, suggesting that HBsu-RFP is binding to the B. subtilis chromosome.

Figures 4 to 9 show that the levels of expression of HBsu-RFP varies depending on the presence IPTG as this is under the control of an IPTG inducible promoter in the BioBrick. Each figure contains an image of B. subtilis transformed with the BioBrick. The images were taken with phase contrast (left) and fluorescence (right) microscopy at 10, 30, 60, 120 and 240 minutes after the bacteria were inoculated into their respective mediums which contained differing IPTG concentrations. In the negative control (figure 4) there is no IPTG, therefore there was no expression of HBsu-RFP. In figure 5 the IPTG concentration was low (0.05mM) which meant that even after 240 minutes there was no HBsu-RFP expression visible. Figures 6, 7, 8 and 9 which show images of transformed B. subtilis in IPTG concentrations of 0.1, 0.2, 0.4 and 0.8mM respectively. In all these IPTG concentrations HBsu-RFP was expressed by 240 minutes, as shown by the red rods in the fluorescence microscopy photographs. At concentrations of IPTG of 0.1mM we only detected HBsu-RFP after 240 minutes whereas at concentration of IPTG of 0.8mM expression of HBsu-RFP was visible after only 30 minutes. These results are of particular use as they characterise how long we need to leave bacteria in a particular concentration of IPTG before we can expect to detect them with microscopy. Figure 10 and Table 1 summarise these results. 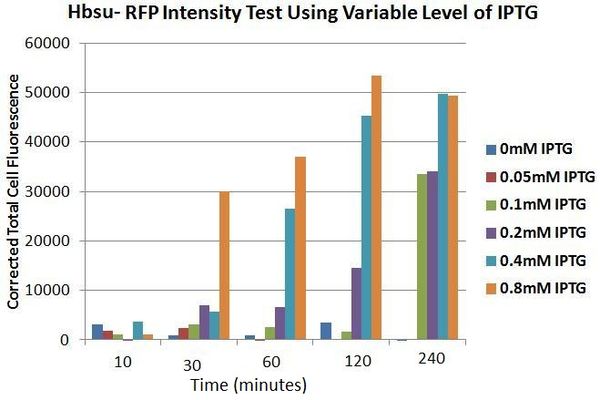 Figure 10. Chart showing the level of RFP expression by B. subtilis, corrected for by the number of cells,at time intervals after the addition of IPTG of different levels of concentrations.

Table 1. Table showing the level of RFP expression by B. subtilis at time intervals after the addition of IPTG in different concentrations.