BBa_K1152005 is an expression cassette encoding for a Non-Ribosomal Peptide Synthetase that synthesizes a tripeptide consisting of Phenylalanine, Ornithine and Leucine. It was created by Module Shuffling within the Tyrocidine-cluster from B. parabrevis.

pIK04 was amplified out of three fragments via Gibson Cloning: Modules TycAdCom and TycC5-TycC6 from B. parabrevis, as well as a backbone. We verified the genotype by restriction digest with various restriction enzymes, among them EcoRI and PstI, and sequencing of the assembly overhang regions. Furthermore, SDS-PAGE was performed after induction of cells in order to prove expression – the expected band at 381 kDa was clearly visible after Coomassie staining. Finally, Mass-Spec analysis and hydrolysis which was followed by an ornithine assay were performed to prove the functionality of the expressed NRPS. 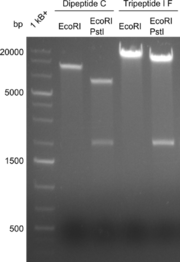 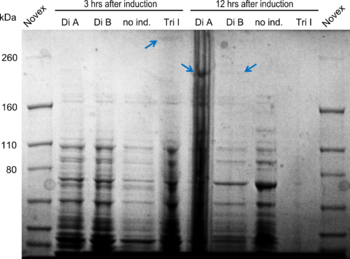 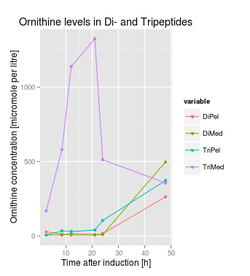 (Figures 1, 2 and 3: Verification of the genotype, the expression and the functionality of BBa_K1152005)

In restriction digest, as one can see in the first figure, the cutting pattern was as expected. For restriction digest with EcoRI alone, one can nicely see that only linearized vector at the size of 12600 bp is present. If the digest ist conducted with EcoRI and PstI, as expected two bands show up, one at around 2000 bp (backbone) and one at around 10600 bp (insert).

In the SDS-PAGE, expression of the NRPS could be verified, as the expected band at 381kDa is visible, already 3 hours after induction with IPTG (see figure 2), for the sample 12 hours after induction, not enough sample could be loaded due to very high viscosity. In order to show functionality of BBa_K1152005, we performed ornithine screening and Mass-Spectrometry. As one can clearly see in figure 3, the Ornithine-level is massively increased in the Tripeptide-samples. This is due to the fact that in the process of purification, the short peptides were hydrolyzed, hence ornithine, which is incorporated in the Tripeptide is released into the medium.