Not Released
Sample In stock
Experience: None
26 Uses
2 Twins
Get This Part

The human influenza hemagglutinin (HA)–tag enables the detection, isolation and purification of proteins.
Engineered into recombinant proteins, it does not seem to interfere with its bioactivity or biodistribution.
It is derived from a surface glycoprotein of the human virus. The tag consists only of the amino acids 98-106 of the original protein.

The HA-tag was used mainly for protein detection. After blotting our SDS-PAGE gels on PVDF membranes, anti-HA-antibodies were used to target our recombinant proteins. Secondary antibodies furnished proof of our proteins. Figure 1: Proteins with HA-tag were detected with anti-HA-antibody on a Western Blot.

This BioBrick constitutes the improvement of BBa_K128001 containing the HA-tag in silver standard (for further information click [1] or [2]). As the RFC23 pre- and suffix do not automatically include a start and stop codon respectively, N- and C-terminal fusions of this HA-tag don't lead automatically to a transcriptional start and stop of the corresponding DNA-sequence. In contrast, the RFC25 biobrick (which is also suitable for functional part fusions) has the start codon and stop codon automatically included in its prefix and suffix.

As our improved BBa_K1150016 contains the RFC25 prefix and suffix, start or stop codon are given beforehand which facilitates cloning and saves time.

The new version includes the same sequence of amino acids and has the following advantages:

• Cloning the HA-tag BBa_K1150016 N-terminal to other fusion parts leads to an automatic transcriptional start due to the introduced ATG in the RFC25 prefix.

• Cloning the HA-tag BBa_K1150016 C-terminal to other fusion parts leads to an automatic transcriptional stop due to the introduced stop codon in the RFC25 suffix. 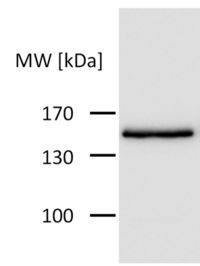 HA-tag is a fragment of peptide originated from Human influenza hemagglutinin. In our construct design, we place HA-tag after our target protein, AID, so as to conduct following experiments such as Western-blot, which confirm that our target protein is expressed. It is indeed a useful tool to verify the target protein!